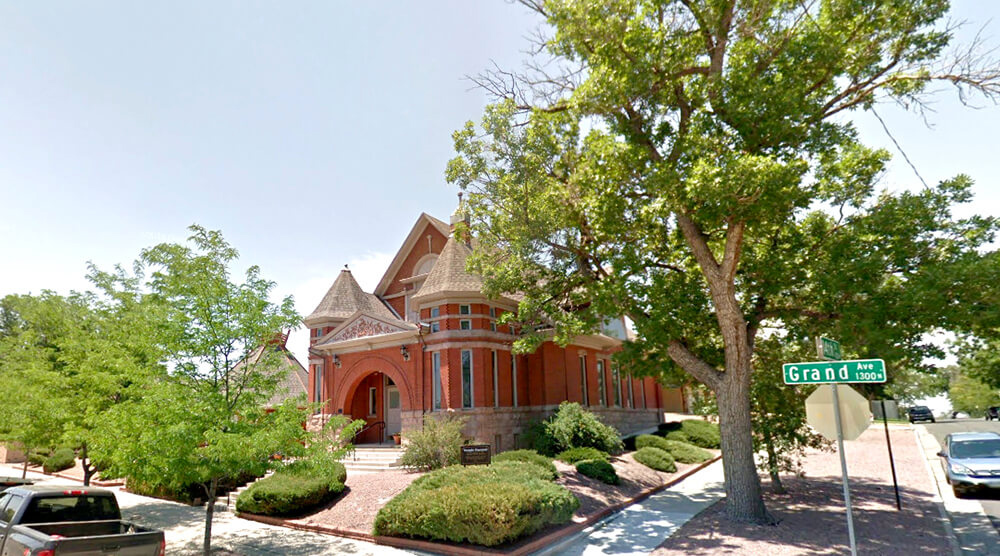 The Temple Emanuel synagogue in Pueblo Colorado. Richard Holzer, 27 was arrested by FBI agents as he planned to bomb this house of worship. Photo Credit: Google Earth

Prosecutors have charged Holzer with domestic terrorism and a hate crime, which can carry a maximum 20-year sentence if convicted.

Note to our readers: (In the original version of this article, the name Richard Spencer, the leader of an alt-right movement, was accidentally written as Robert Spencer. Robert Spencer has absolutely no association with Richard Spencer or the movement he represents. The Jewish Voice applauds the work that Robert Spencer has dedicated his life to and we offer our sincere apologies to him for the damage that this mistake has caused)

A white supremacist has been arrested on Friday in Pueblo, Colorado for planning to blow up a local synagogue, as was reported by multiple news outlets.

According to the reports, the FBI has been tracking Richard Holzer, 27, for several months before his arrest because of anti-Semitic comments he posted on Facebook using a number of different aliases.

According to the Fox News affiliate in Denver the investigation into Holzer began after an undercover FBI agent purporting to be a woman who supports white supremacy contacted him on the social media platform. 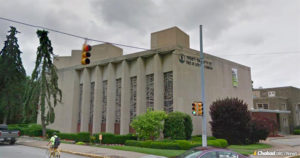 The Tree of Life synagogue in Pittsburgh. Photo Credt – Chabad.org

Holzer repeatedly espoused anti-Semitic and white supremacist views in his messages with the agent.

World Israel News reported that on one Facebook post, he wrote that “I wish the Holocaust really did happen… they need to die.”

On Friday night, he donned a Nazi armband, mask, armed himself with a machete and brought a copy of Adolf Hitler’s “Mein Kampf” and went out to meet undercover FBI agents who were posing as fellow skinheads, according to the WIN report. The agents brought him what he believed were two pipe bombs along with 14 sticks of dynamite to blow up Temple Emanuel, a synagogue that he had been scouting out for weeks beforehand. The explosives that the undercover agents gave him were actually fake, according to the WIN report.

The Fox News TV affiliate in Denver (Channel 31) reported that the Temple Emanuel synagogue is the second-oldest in Colorado and was completed in 1900, according to Temple Emanuel’s website. It has a congregation of about 30 families and a rabbi from Denver who travels to Pueblo twice a month.

“Holzer sent a video of himself to the undercover agents showing him putting on the mask, grabbing a machete and saying, ‘May the gods be with me for what I must do,’” FBI agent John W. Smith said.

“This case emphasizes our continued efforts to aggressively and promptly address threats to our community to include violence against places of worship. I cannot stress enough the importance of reporting threats in our neighborhoods,” he added.

WIN reported that according to court documents, Holzer said at the meeting that he was fighting a holy war and wanted to show everyone that Jews are not wanted here.  He described the “explosives” he was given, as “absolutely gorgeous” and that he was planning on bombing the synagogue at night in order to avoid the police.

Channel 31 reported that Holzer told the agent he had checked out the temple property and met with undercover agents at a Pueblo motel on Friday.

Prosecutors have charged Holzer with domestic terrorism and a hate crime, which can carry a maximum 20-year sentence if convicted.

Denver’s channel 31 reported that Holzer, who lives in Pueblo, briefly appeared in court on Monday in handcuffs and was wearing the same gray polo shirt with a black collar he wore in his arrest photo. He told U.S. Magistrate Judge Kristen Mix that he understood the charge against him, and she scheduled his next court date for Thursday.

She granted his request for a public defender who she said would be appointed before the next hearing when it will be determined whether he can be released as the case proceeds, according to Denver’s Channel 31.

Holzer was in federal custody in the Denver area, Jeff Dorschner, a spokesman for the U.S. Attorney’s Office for Colorado, said.

“Mr. Holzer repeatedly expressed his hatred of Jewish people and his support for a racial holy war,” Dunn said at a news conference, as was reported by the Fox TV affiliate in Denver.

If convicted of a pending domestic terrorism charge, Holzer could face 20 years in prison, Dunn said. 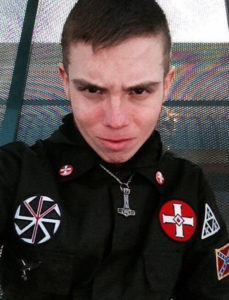 According to the reports, the FBI has been tracking Richard Holzer, 27, for several months before his arrest because of anti-Semitic comments he posted on Facebook using a number of different aliases. Photo obtained by ADL through one of Holzer’s alleged Facebook accounts.

“Mr. Holzer will now have the opportunity to explain his behavior through our court system in a constitutional way — which in the spirit of irony, protects religious freedom as one of its most golden rules,” Pueblo police Chief Troy Davenport said, according to the Fox News report.

This horrifying plot comes only a year after the horrific shooting at the Tree of Life synagogue in Pittsburgh that killed 11 people last October 27th.

The accused sole perpetrator of the Pittsburgh synagogue massacre, 46-year-old Robert Gregory Bowers, was arrested and charged with 63 federal crimes, some of which are capital crimes. He has pleaded not guilty. He separately faces 36 charges in Pennsylvania state court.

Using the online social network Gab, Bowers had earlier posted anti-Semitic comments against HIAS (formerly, Hebrew Immigrant Aid Society) in which Dor Hadash and Tree of Life were supporting participants. Referring to Central American migrant caravans and immigrants, Bowers posted on Gab shortly before the attack that “HIAS likes to bring invaders in that kill our people. I can’t sit by and watch my people get slaughtered. Screw your optics, I’m going in.

Some sources argued that the incident should be referred to as an act of domestic terrorism.

The ADL’s Center on Extremism has been aware of Holzer’s activities for several years and has shared information with law enforcement on several occasions (unrelated with this case), citing concerns he might be dangerous. He frequently posted online about killing his enemies, sometimes including videos of himself opening and closing a switchblade or flipping a balisong knife.

In May 2016, Holzer posted Facebook videos of himself marching around Port Hueneme and Oxnard, California, wearing black military-styled fatigues adorned with a mixture of Klan and neo-Nazi pins and patches. Holzer, using the name Rikard Buschmaan, claimed to be part of the Sons of Odin Klavern, a very small Klan group based in South Plattsburgh, New York.

Before he left California, Holzer recorded video of himself urinating on a synagogue in Thousand Oaks, California. He later posted that video on Facebook.

In 2018, Holzer surfaced in Colorado and began connecting with local white supremacists. In February 2018, he participated in the anti-Muslim “March against Sharia” event in Denver, Colorado, alongside William Planer and other members and associates of the now defunct Traditionalist Worker Party. Planer, who previously lived in Denver, was arrested on July 14, 2017, for affixing a “Fight Terror, Nuke Israel” sticker to the door of the Chabad Lubavitch Jewish Center in Colorado Springs, Colorado.

On April 27, 2019, gunman John Earnest, 19, who was armed with an AR-15 style rifle fired shots inside the Chabad of Poway synagogue in Poway, California, a city approximately 20 miles (32 km) north of San Diego. The attack took place on the last day of the Jewish Passover holiday, which fell on a Shabbat.

Congregant Lori Gilbert Kaye, 60, was killed and three other people were injured, including Rabbi Yisroel Goldstein, the synagogue’s rabbi. After fleeing the scene, Earnest phoned 911 and reported the shooting. He was apprehended in his car approximately two miles from the synagogue by a San Diego police officer.

On other news developments pertaining to the burgeoning phenomenon of white supremacy, according to a report by Benjamin Kerstein at Algemeiner, other far right activists and dangerous extremists have been quite vocal as of late in their visceral animosity of Jews.

Kerstein reported that Richard Spencer, one of the leaders of the American alt-right movement has been caught on audio tape spewing forth egregious antisemitic and racial slurs that were interspersed between a litany of imprecations.

The Algemeiner report indicated that the tape in question was uploaded to YouTube by right-wing activist Milo Yiannopoulos.

Kerstein reports that the website known as Gizmodo indicated that the tape was recorded in the aftermath of the notorious white supremacist rally in Charlottesville, Virginia, that took place in the summer of 2017. This hated filled rally which was eerily reminiscent Nazi era rallies in the streets of Berlin or anywhere in Nazi occupied Europe, resulted in a frightening display of physical violence when a white nationalist drove his vehicle into a crowd of counter-protesters, killing a young woman, Heather Heyer.

President Trump, who at the time, was quoted as saying that there were “good people” on both sides of the Charlottesville rally took a tremendous amount of heat for this statement. The mainstream news media, which is driven by the constant touting of a left-wing political agenda along with Trump’s Democratic party adversaries wished to portray him as siding with and tacitly supporting white nationalists, Klansmen and neo-Nazis of all stripes. Trump has categorically denied any association with white supremacist groups and has become known as the most pro-Israel and pro-Jewish president in the modern era.

In the audio tape, alt-right leader Richard Spencer can be heard stridently lambasting Jews and people of color in a profanity-laced rant that bordered on hysteria, according to the Algemeiner report.

“We’re going to ritualistically humiliate them!” he continues. “I am coming back here every f***ing weekend if I have to! Like this is never over! I win! They f***ing lose!”

Kerstein reported that Spencer then uses antisemitic and racist slurs, shouting, “Little f***ing kikes! They get ruled by people like me! Little f***ing octaroons!”

“I rule the f***ing world!” he concludes. “Those pieces of shit get ruled by people like me! They look up and see a face like mine looking down at them! That’s how the f***ing world works! We are going to destroy this f***ing town!”