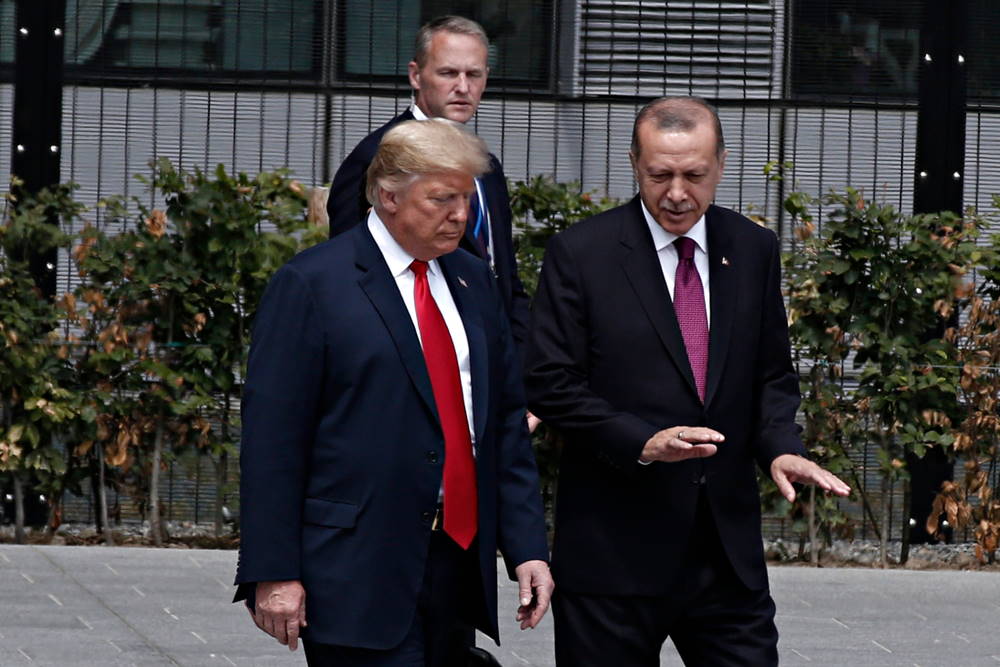 Turkish President Recep Tayyip Erdogan is accusing Moscow and Washington of reneging on commitments to enforce the withdrawal of a Syrian Kurdish militia from Turkey’s border, and he is warning of a resumption of military operations in Syria.

Erdogan struck two separate deals in October, with Russian President Vladimir Putin and U.S. Vice President Mike Pence, with both agreeing the YPG would withdraw at least 30 kilometers from the Turkish border.

In return, Ankara agreed to pause its military offensive into Syria against the YPG, which displaced more than 100,000 people, mainly Kurds.

Erdogan, speaking before leaving for Budapest, claimed at least 11 Syrian National Army members, which is allied to Turkish forces in Syria, had been killed Thursday by the YPG.

Ankara designates the YPG as terrorists linked to an insurgency being waged inside Turkey by the Kurdish rebel group, the PKK.

“You only trust what you can verify,” said former Turkish ambassador Mithat Rende, who served in the region. “Both major [Russia and the U.S.] powers are playing the Kurdish card. They are both trying to keep the Kurds as close as possible; they are rivaling one another,” added Rende.

Erdogan and Putin decided that Turkish and Russian military patrols would take place within a 5-kilometer zone inside Syria to verify YPG withdrawal.

Such provisions, some analysts warn, are unlikely to alleviate Ankara’s concerns over Moscow’s allegiances.

“Moscow has always had an agenda with the Kurds in the region, dating back to the Cold War,” said international relations professor Huseyin Bagci of Ankara’s Middle East Technical University. “Moscow, unlike NATO countries, doesn’t designate the PKK as a terrorist organization. There are PKK and PYD [political wing of the YPG] offices in Moscow.”

The YPG is a crucial ally of the Washington-led war against the Islamic State terror group. Erdogan said he would press the issue when he meets with President Trump next week in Washington.

Erdogan reiterated his warning Thursday to keep fighting the YPG in Syria if it did not entirely withdraw. Ankara insists its Syrian “Operation Peace Spring” is only being “paused.”

A resumption of “Peace Spring” would offer Erdogan the opportunity to achieve broader goals. “The Turkish intervention in Syria, it lasted to a certain point,” said Bagci. “But Turkey only achieved half of its target aim, not the whole. That’s why Erdogan is playing for time, and Russia tries to stop Turkey from moving deeper into Syria.”

Turkish forces currently control a 120-kilometer strip that is 30 kilometers deep in Syrian territory along Turkey’s border. Ankara’s original plan envisioned an area 450 kilometers long being secured.The “safe zone,” as Erdogan dubbed the area, is not only to secure Turkey from any attacks by the YPG, but also to allow the return of at least a million Syrians currently living in Turkey, who fled the civil war.

“Ankara was disappointed when the operation stopped,” said Rende. “There is always the possibility it can resume. At this point in time, the area under Turkish control is not enough to repatriate 1 million Syrians; it’s not enough.”

But the YPG is accusing Ankara of violating the agreements struck with Moscow and Washington.

“Turkey has been violating the cease-fire, and Americans on the ground have been witnessing this and reporting to superiors. We expect America to fulfill its duty as the guarantor of the cease-fire agreement.” tweeted SDF commander Mazlum Kobane.

Kobane went on to call for the United States to enforce sanctions on Turkey if the attacks didn’t cease. Ankara has not yet commented on the allegations. The SDF is working closely with U.S. forces in Syria, and Kobane spoke last month with Trump. The Kurdish militia leader reportedly could even be hosted by Washington.

Analysts say Ankara’s increasingly fiery rhetoric and threats of a renewed offensive against the YPG, however, will only provide further ammunition to those in Washington calling for sanctions against Turkey.

On Wednesday, a bipartisan group of senators wrote to Secretary of State Mike Pompeo, calling for an investigation into reports of Turkish violations of the cease-fire in Syria, calling for “tough economic sanctions.”

But some analysts say given the scale of public discontent toward the presence of Syrian refugees in Turkey, and the political threat it poses to Erdogan, the Turkish leader may be ready to risk the wrath of Washington and Moscow in order to pursue his Syrian goals. (VOA)

By: Turkish President Recep Tayyip Erdogan is accusing Moscow and Washington of reneging on commitments to enforce the withdrawal of a Syrian Kurdish militia from Turkey's border, and he is warning of a resumption of military operations in Syria. Photo Credit: Shutterstock