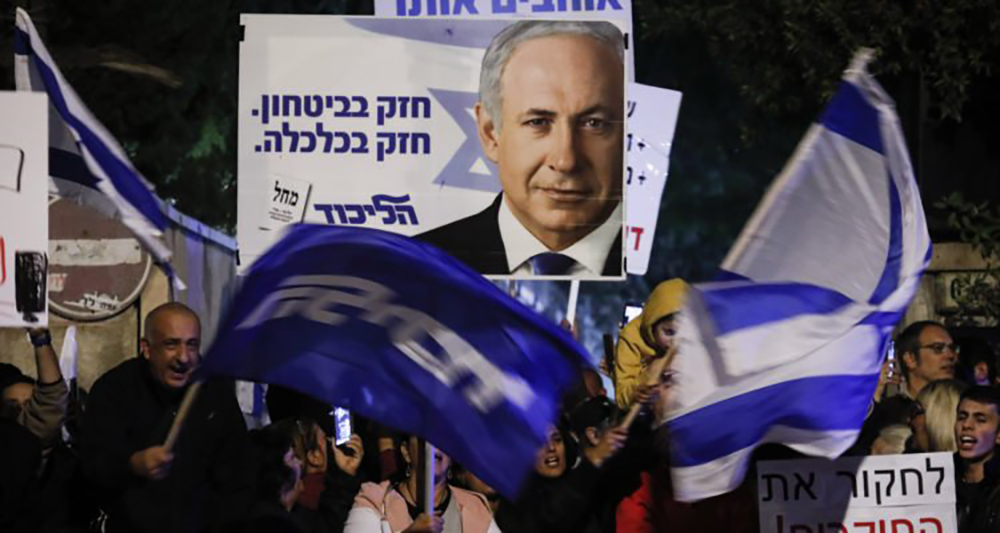 Netanyahu supporters gathered to show solidarity with the Israeli leader as he battles corruption charges and challenges from within his own party.

Thousands of people rallied in support of Prime Minister Benjamin Netanyahu on Tuesday in what was intended to be a show of strength for the Israeli leader as he battles a corruption indictment and a possible rebellion within his own party, as was reported by AP.

The strong turnout could give Netanyahu a boost in terms of public opinion and against potential rivals in his Likud party as the country appears to be heading toward new elections once again, according to the AP report. Netanyahu has claimed that he is the victim of an attempted “coup” by overzealous police investigators and prosecutors.

AP reported that as the protest got underway in central Tel Aviv, a crowd of roughly 5,000 people rallied for Netanyahu, hoisting Israeli flags and posters that accused prosecutors of “blackmail” and “threats.” Most of Likud’s senior officials skipped the event.

Netanyahu ally Micky Zohar, one of the few Likud officials to attend, took to the stage and commented that the goal of the demonstration was not to “attack” the legal system, drawing boos from the crowd.

“We can’t replace the system, but we can change it,” he said.

AP reported that Culture Minister Miri Regev, another Netanyahu backer, said the protest aimed to “convey a message that the rule of law isn’t above the law.”

With Israel facing a potential third election in less than a year, Netanyahu is seeking to put down any potential rebellion in Likud by rallying his base of nationalist and religious voters.

Only one top official, Gideon Sa’ar, is openly challenging the prime minister, but the silence of others is raising speculation that Netanyahu’s support could be cracking.

The prime minister has been lashing out at police and prosecutors since Israel’s attorney general last Thursday indicted Netanyahu on fraud, breach of trust and bribery charges. His backers have already staged small gatherings supporting him, but Tuesday night’s event was a far larger demonstration.

Netanyahu himself did not attend the event.

World Israel News reported that even as MK Gideon Sa’ar steps up his campaign to unseat Netanyahu as leader of the Likud, party members continue to overwhelmingly prefer the incumbent prime minister as their leader, according to a public opinion poll published on Tuesday.

The survey, released by Channel 12, showed that among Likud member, 88% said that they would vote for Netanyahu in the anticipated upcoming party primary.

Other would-be challengers have been cautious, if not silent, about questioning Netanyahu’s ability to serve after Attorney-General Avichai Mandelblit announced on Thursday that the prime minister would be indicted in connection to three cases of alleged corruption.

Sa’ar has been a lone voice, saying that a primary is necessary immediately to replace the current leader, also after two failed attempts to form a new government this year following Knesset elections in April and September.

However, Culture and Sports Minister Miri Regev has accused Sa’ar of “directing friendly fire” within the party and added that she hoped that Sa’ar would not “stab Netanyahu in the back.”

“The Likud is a family and you don’t turn on your family,” the minister said Tuesday in an interview on Kan public radio, insisting that “the problem is not Netanyahu; it’s the Likud and the right,” an apparent reference to an accusation that left-wing forces have been working through the investigations against the prime minister to bring down the right-wing government.