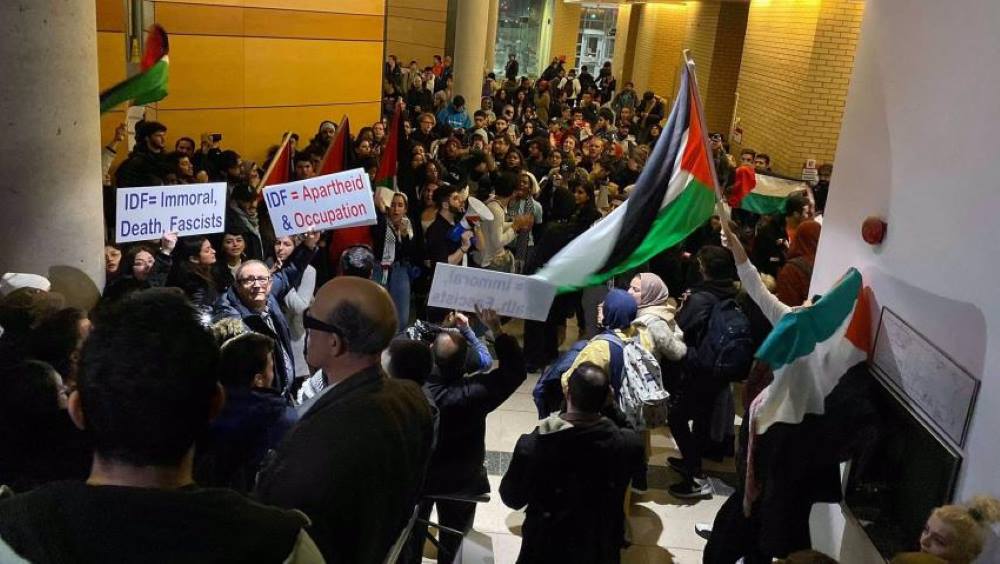 The Toronto Sun newspaper reported in its Nov. 22 issue that anti-Israel extremists on the York University campus shouted "Intifada, Intifada, go back to the ovens!” Photo Credit: Twitter

The Toronto Sun newspaper reported in its Nov. 22 issue that anti-Israel extremists on the York University campus shouted “Intifada, Intifada, go back to the ovens!” Canadian Prime Minister Justin Trudeau denounced the violence stating: “What happened that night was shocking and absolutely unacceptable. Anti-Semitism has no place in Canada. We will always denounce it.” Trudeau clearly saw that there is no difference between anti-Semitism and anti-Zionism. He is correct.

These sickening calls to kill Jews happened while Herut Canada was sponsoring a Nov. 20 evening program with “Reservists On Duty” which describes itself as “a non-profit organization established in 2015 by IDF veterans who felt a duty to expose and counter the BDS movement and new forms of anti-Semitism erupting on US college campuses.”

Herut Canada’s student leader, Lauren Isaacs has stated: “These were, in fact, riots. Not peaceful protests.” She goes further and says “the explosiveness of the event at York University is very telling about the culture of Antisemitism and intolerance towards Israel that exists on most university campuses nowadays.”

Lauren Isaacs is right and the U.S. Jewish establishment and its leaders must be forced to stop responding to this challenge in the same business-as-usual way that they have been for the last 10 years. The hatred of Israel on campus is growing unabated and pro-Israel students need better support.

Marc Newburgh the CEO of Hillel Ontario stated on the Hillel website that “Hillel York declined to sponsor or host last night’s program because we believed the event did not align with our campus programming strategy and we were concerned about the risk of violence.” So Herut Canada went it alone. What’s more the Canadian Jewish News (CJN) reported that Isaacs claimed that Hillel tried to have the event cancelled.

This act of cowardice on the part of Hillel surely emboldened the Israel-haters. A real commitment to Jewish unity is just part of the answer here. Hillel should have supported this Herut event from the start and we demand for Hillel’s policies to be reviewed and corrected and ask that others support this call.

Marc Newburgh should be removed from his position. There is no room for Jewish organizational professionals such as Newburgh.

Lastly, the physical confrontations that night in Toronto should make plain that young Jews must be prepared to protect themselves. The BlogTO news website described the protest in its headline as a “Brawl.” CJN called it a “Clash.” Whatever its called, this physically violent anti-Semitism is a real thing on campus that young Jews are facing and must be prepared for. Just as there was a sea change in the way Jews saw the necessity for synagogue security after Pittsburgh and Poway we hope for a transformation here. The event went on because Jews did not back down when physically challenged. They stood their ground.

Isaacs told a reporter: “even with all the disruptions, including three interruptions inside the room once the event started, she considers the night a success. For one thing, it was very well attended and the audience was engaged.” Let’s wish Isaacs and all of the other campus Zionist activists like her many more successful nights for Israel and demand real support from Hillel for Zionism on campus.