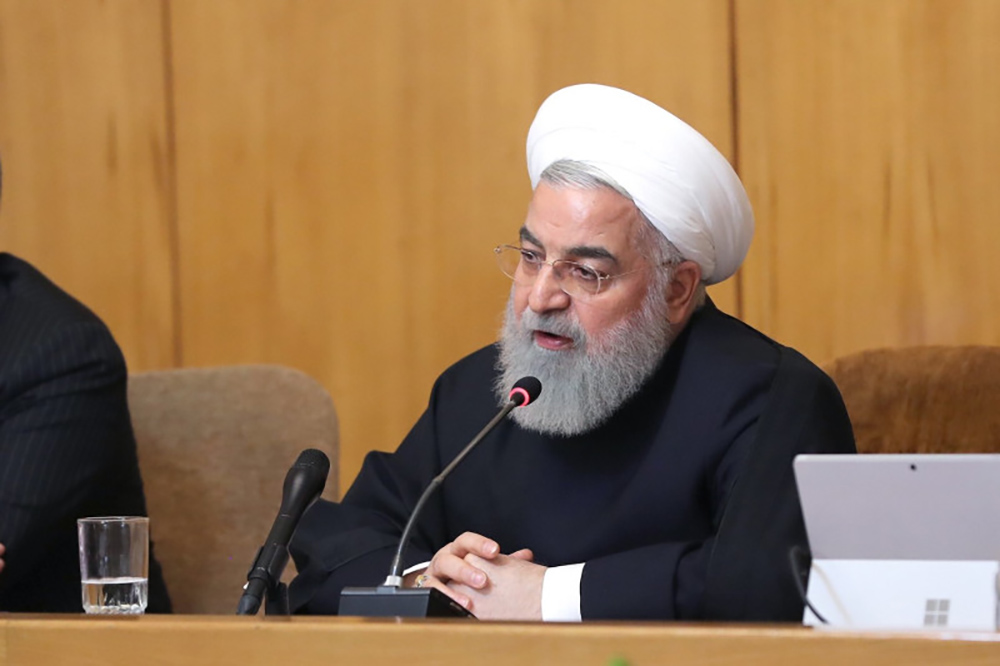 An outcome dependent on Israel 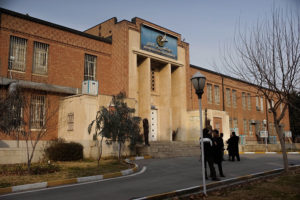 The former US embassy building in Tehran. Photo Credit: PBS.org

There’s an old Jewish joke where a young man walks up to his grandfather man and asks him how he’s doing.

The grandfather answers, “In a word, good.”

“And in two words?” the grandson presses.

“Not good,” his grandfather replies.

The events of the week call the joke to mind in relation to Iran and its war against Israel and the United States.

Sunday, a crowd of thousands gathered outside the US embassy building in Tehran and chanted, “Death to America, Death to Israel.” The Iranians sounded their customary death chants to mark the 40th anniversary of the seizure of the US embassy and the hostage crisis it precipitated.

Sunday’s demonstration was the opening shot in a week of hostile actions by Iran. On Monday and Tuesday, senior Iranian officials announced they are abandoning key limitations set on their nuclear activities by the nuclear deal they concluded with the Obama administration, the EU, Russia and France in 2015. Monday Iran announced it expanding its uranium enrichment at the Natanz nuclear installation with advanced IR-6 centrifuges, and that it is doubling the number of IR-6 centrifuges presently being used. 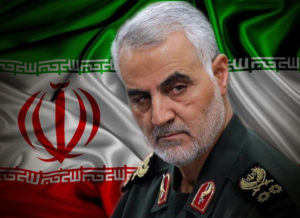 The Iranian regime has shown willingness to openly intervene in quelling the mass anti-government protests in Iraq and Lebanon, as exemplified by General Qassem Suleimani, commander of Iran’s Revolutionary Guard Corps Quds Force direct involvement in attempts to repress the protests in Iraq, and by Hezbollah’s open efforts to stymie the protesters in Lebanon. Photo Credit: Tehran Times

Tuesday Iranian President Hassan Rouhani announced that Iran is renewing enrichment activities at its Fordo nuclear installation, built inside of a mountain outside Qom. According to Rouhani, beginning Wednesday Iran would begin enriching uranium at Fordo to five percent by injecting its centrifuges with uranium gas.

Many commentators responded to Iran’s announcements by declaring that the Trump administration’s “maximum pressure” strategy for scaling back Iranian aggression and thwarting its nuclear program has failed. President Donald Trump’s maximum pressure campaign, which is enthusiastically supported by Israel and the Sunni Arab states is comprised of continuously escalating US economic sanctions against Iran. Those sanctions are reinforced by US-supported military operations by US allies – primarily Israel and Saudi Arabia — against Iranian forces and Iranian proxy forces in Syria, Lebanon, Iraq and Yemen.

There are three legs to the claim that the maximum pressure campaign has failed. First, its critics note, the US sanctions have failed to destroy Iran’s economy. This week Foreign Affairs proclaimed that Iran has survived its sanction-induced recession. Its economy, now at zero growth, is no longer shrinking. Iran’s economic survival, Henry Rome insisted, is proof that economic pressure is insufficient to bring down the regime.

The second basis of the claim that the maximum pressure campaign has failed is the Trump ordered removal of US forces from the Syrian border with Turkey. Trump’s action, his critics say, gave Iran and Russia control over the border with Syria, which has allowed them to consolidate their control over Syria. This in turn emboldened Iran to rachet up its nuclear operations. 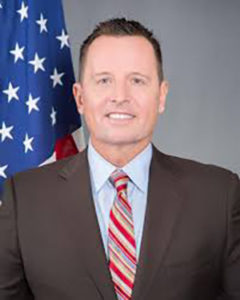 Third, the critics say, the Iranian regime’s willingness to openly intervene in quelling the mass anti-government protests in Iraq and Lebanon, as exemplified by General Qassem Suleimani, commander of Iran’s Revolutionary Guard Corps Quds Force direct involvement in attempts to repress the protests in Iraq, and by Hezbollah’s open efforts to stymie the protesters in Lebanon. These shameless moves by Iran and its foreign legion to dictate the outcome of political unrest in foreign countries, it is argued, means that Iran has consolidated its power and has no compunctions about flaunting it.

There are a few problems with these claims.

First, the fact that the Iranian economy hasn’t collapsed doesn’t mean that the Iranians aren’t constrained by the sanctions. According to the World Bank data, Iranian military expenditures increased from year to year between 2014 and 2017, but dropped in 2018. This week US Ambassador in Germany Richard Grenell said that Iran’s military budget shrunk by 28 percent last year. Grenell said that outlays to the Revolutionary Guard Corps decreased by 17 percent last year.

So while it is true that the regime has survived, it is far from true that the sanctions have had no significant impact on Iran. Moreover, even Foreign Affairs acknowledged that it is likely that Iran’s ability to survive under the sanctions is limited.

Second, there is reason to doubt that Iran’s announcements regarding its stepped-up uranium enrichment describe new activity.

In 2015, Barack Obama and his advisors insisted that the nuclear deal’s inspection regime was unprecedented in its invasiveness. But this not true. 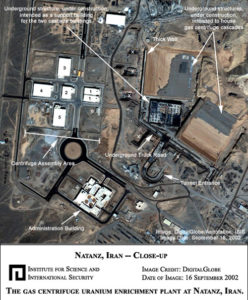 The Los Angeles Times reported in late 2017 that the nuclear reactor at Natanz is monitored around the clock through closed circuit video cameras. Photo Credit: www.isis-online.org

The “invasive” inspections that have taken place have also been far from exhaustive.

For instance, as the Los Angeles Times reported in late 2017, the nuclear reactor at Natanz is monitored around the clock through closed circuit video cameras. The problem is that the feed does not go directly to the IAEA in Vienna. It goes to the Iranian regime which then sends it on to Vienna. Consequently, there is no way to determine whether the footage the UN receives reflects what is actually occurring at the nuclear site.

“Nearly all of the inspections,” the paper reported “were of less sensitive facilities such as universities and manufacturing plants.”

Diplomatic sources told the LA Times that the IAEA was “careful not to provoke a confrontation by demanding access without evidence to sites that Iranian officials have said are off-limits to foreign inspectors.”

Perhaps Iran was moved to announce its breaches of the nuclear deal at Natanz and Fordo because the US forces have Syria’s border with Turkey. But it is more likely that Iran’s action was a distress signal.

In his statement Monday, Rouhani made clear the move is an attempt to extort the Europeans into giving Iran money.

In his words, “When they, [i.e., Europe] fulfill their commitments, [i.e., give us money], we will stop the gas injection.”

The US withdrawal from Syria’s border with Turkey did lead to Iran and Russia asserting control over the border. But it also put Iran in open confrontation with Turkey. For a decade, Iran and Turkey have been working together in busting US sanctions and in undermining US operations in Syria and Iraq. Now that they stand opposite one another at the Syrian border with Turkey, the future of that cooperation is in doubt.

On Tuesday, Elizabeh Tsurkov from the Foreign Policy Research Institute posted footage of Syrian protesters in Sharjah, a town in Daraa province in southern Syria, an area under full control of the Assad regime, (which is controlled by Iran).

The protesters were chanting “Free, free Syria. Iran get out.”

The protesters in Sharjah were echoing the sentiments of millions of Lebanese and Iraqi protesters who have been out on the streets of their respective countries calling for the overthrow of their governments, which are controlled by Iran, and for a complete reordering of their political systems.

This then brings us to the third argument for the failure of the maximum pressure campaign.

According to media reports, Soleimani has travelled to Iraq twice over the past month to oversee the repression of the protests, and Iranian-controlled Shiite militias have so far reportedly killed 250 protesters and wounded thousands more.

In Iraq, the protests are concentrated not in Sunni areas, but in the Shiite south. And they are distinctly anti-Iranian.

At the same time the Iranian demonstrators in Tehran were shouting “Death to America,” and “Death to Israel,” thousands of Iraqi protesters in Karbala were throwing firebombs at the Iranian consulate in the city. They replaced the Iranian flag at the site with an Iraqi flag.

Throughout Iraq’s Shiite south, protesters are throwing shoes and burning pictures of Iranian leader Ali Khamenei and calling for Iran to get out of their country. The Shiite clerics in Najaf, the religious capital of Shiite Islam have green lighted the protests against Iran. In other words, the Iranians are losing their own backyard.

The sanctions are one of the causes of the protests in both Lebanon and Iraq. Due to the economic constraints Iran is facing, it has reportedly scaled back its payments to its proxies – particularly Hezbollah and the Shiite militias in Iraq. These proxies in turn, have had to expand their use of public funds and extortion to fund their operations.

The protesters in Lebanon are reacting to the economic failure of their country, a failure which owes primarily to government corruption and incompetence. Hezbollah controls the Lebanese government both through its own political representatives and through its proxies. Consequently, it is the protesters’ main target.

In Iraq, the Iranian run Shiite militias have also been feeding off the public trough. They have commandeered public funds and institutions to pay for their operations. And, according to a recent report in Tablet online magazine, they supplement their income by making people travelling on roads under their control pay “tolls.”

If Iran had more money to pay its proxy governments, presumably they would be stealing less money from their respective publics.

The Lebanese and Iraqis protesting their governments and the Iranian regime which controls them represent a profoundly negative development for Iran and its 40 year war against Israel and America. Together with Syria, Lebanon and Iraq play key roles in Iran’s strategy for fighting Israel. The more unstable they are, the less use Iran will be able to make of them in a future offensive against Israel.

Today, at least publicly, Israel is focusing its attention on Iran’s nuclear operations, and this makes sense. But actions to decrease Iran’s regional power and to destabilize the regime’s grip on power at home are essential components of any strategy for diminishing Iran’s capacity to attack Israel.

To date, the Trump administration’s maximum pressure strategy has not managed to bring the regime down. And it is unlikely that on their own, US economic sanctions will suffice to ever bring it down.

Yet as the mass demonstrations against Iran and its proxies in Lebanon and Iraq make clear, the American strategy can and is undermining Iranian domestic and regional power and stability. It is Israel’s responsibility to ensure that this process is expanded and exploited to the greatest degree possible to diminish the prospects of a direct Iranian assault on the Jewish state.