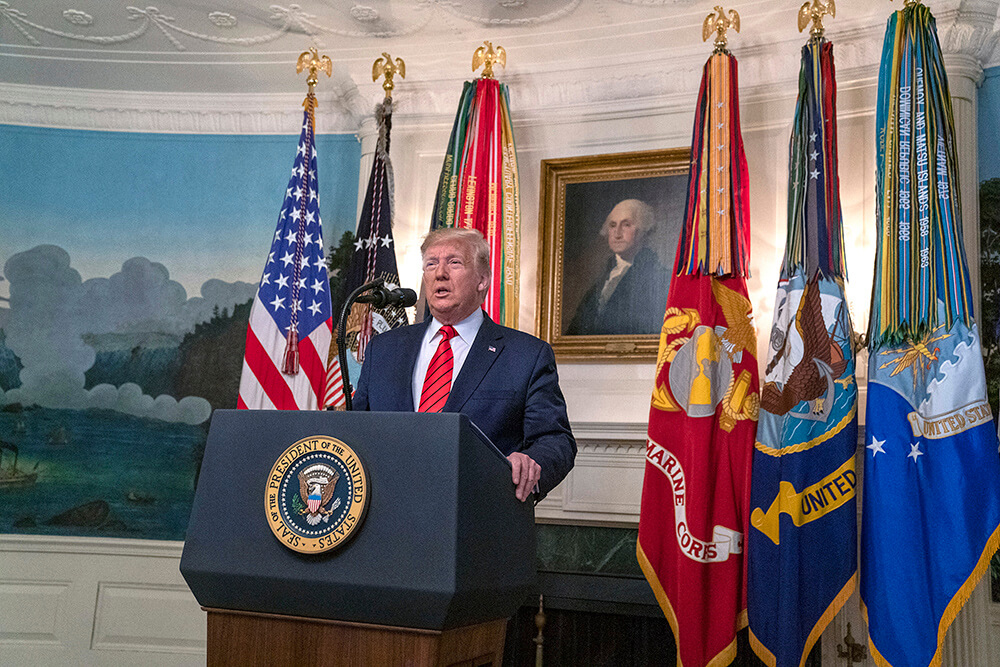 President Donald Trump makes a statement in the Diplomatic Reception Room of the White House October 27, 2019 in Washington, DC. President Trump announced that ISIS leader Abu Bakr al-Baghdadi has been killed in a military operation in northwest Syria. (Photo by Tasos Katopodis/Getty Images)

The Democrats in the media and the federal bureaucracy are now full partners. After they are done with Trump, they will turn their attention to Israel

Nearly every week, the Democrats reach new heights of radicalism. Israel has good reason to be deeply worried.

Until 2000, the peaceful transition of power in the wake of elections was a feature of American democracy that everyone took for granted. In 2000, the Democrats shifted: They refused to accept the election results in Florida that gave George W. Bush his victory in the state, and through it, in the electoral college, until the Supreme Court ruled that the results were legitimate. Even after that ruling, many Democrats considered Bush’s victory and his presidency illegitimate. 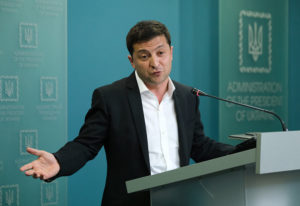 Ukrainian President Volodymyr Zelensky speaks to the media on October 1, 2019 in Kiev, Ukraine. Ukraine has been at the core of a political storm in U.S. politics since the release of a whistleblower’s complaint suggesting U.S. President Donald Trump, at the expense of U.S. foreign policy, pressured Ukraine to investigate Trump’s rival, Joe Biden, and Biden’s son, Hunter. (Photo by Sean Gallup/Getty Images)

In retrospect, the Democrats’ refusal to accept the legitimacy of the 2000 election results marked the beginning of the party’s radicalization.

Since Donald Trump’s victory over Hillary Clinton in 2016, the speed and depth of the party’s radical transformation has gone into overdrive.

The day after the election, Democrats coined a new term in American politics: “resistance.” Until then, the side that lost a presidential election was the “opposition.” But the Democrats don’t simply “oppose” Trump, they “resist” him.

The distinction is profound. An opponent recognizes the basic legitimacy of the person he opposes. A resister does not. The purpose of the anti-Trump resistance is not to offer an alternative path for governing. It is to nullify Trump’s presidency by, among other things, delegitimizing and dehumanizing Trump his family, associates and supporters. The resistance seeks to paralyze Trump’s presidency to prevent him from wielding the power of office and oust him from that office as quickly as possible.

To this end, for instance, the Democratic minority in the Senate has used procedural rules to slow roll Trump’s appointments to senior positions in the executive branch and impede his ability to govern.

The resistance is not limited to the partisan arena. During the 2016 elections, and to an even greater degree in their aftermath, Democrats in the U.S. media and in the federal government—particularly in the intelligence, law enforcement and diplomatic arms of government—joined Democratic politicians in their efforts to nullify the Trump candidacy and later presidency. Like the politicians, they have used the power of their positions to undermine and subvert Trump’s presidency to foment his departure from office.

We saw extra-political resistance in action with the attempt by senior FBI, CIA and Justice Department officials to criminalize Trump as a Russian agent through the use of the Clinton campaign’s so-called Steele dossier. The senior federal officials used the dossier, compiled by former British spy Christopher Steele for the Clinton campaign, as a means to open an investigation against Trump’s campaign and against Trump himself and then cause the appointment of a special counsel to investigate their partisan-financed, false allegations.

As former federal prosecutor Andrew McCarthy wrote in his book “Ball of Collusion” which examines the Russia collusion investigation, the liberal establishment in Washington “exploited its control of law enforcement and intelligence to help Clinton and undermine Trump. This is a scandalous abuse of power.” 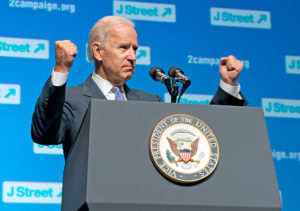 Former VP Joe Biden addresses the 4th National J Street Conference at the Washington Convention Center September 30, 2013 in Washington, D.C. J Street was a key lobbyist for President Barack Obama’s nuclear deal with Iran, which was devastating for Israel. It has campaigned to defeat pro-Israel lawmakers and to elect anti-Israel lawmakers. For instance, in 2012, J Street actively campaigned against Reps. Joe Walsh and Allen West, two of Israel’s most outspoken supporters in the House. (Photo by Ron Sachs-Pool/Getty Images)

When, after nearly two years, Robert Mueller closed down shop with no case against Trump, the Democrats in politics, the media and the federal government seized on a telephone call Trump had with Ukrainian President Volodymyr Zelensky in July and presented it as the ultimate proof of Trump’s criminal nature, treating it as a high crime for which he must be impeached.

The Ukraine call impeachment ploy began in August when a CIA officer with ties to former vice president and Democratic presidential frontrunner Joe Biden submitted a whistleblower complaint to the inspector general of the intelligence community.

The CIA officer alleged that during the course of a telephone conversation with Zelensky, Trump conditioned U.S. military assistance to Ukraine on the Ukrainian prosecution opening a criminal investigation into Burisma, a Ukrainian gas company that paid Biden’s son Hunter millions of dollars while his father as vice president was responsible for the United States’ bilateral ties with Ukraine.

Based on the whistleblower complaint, the Democrats claim Trump subordinated U.S. national interests to his political interest of winning reelection in 2020. The fact that Biden himself bragged publicly that he forced the Ukrainian government to fire the state prosecutor who was conducting a criminal probe of Burisma by conditioning the provision of a billion dollars in U.S. loan guarantees to Ukraine on his removal from office, is of no interest to the Democrats.

In addition to the CIA officer, according to Politico, the allegations of malfeasance that form the basis of the House Democrats’ impeachment inquiry against Trump are being supported by State Department officials known for their hostility toward Trump.

Just as the Democrats aren’t bothered by Biden’s apparently corrupt behavior, so they are unmoved by the fact that Trump disproved the whistleblower allegation by releasing the full transcript of his conversation with Zelensky. From the transcript, it is apparent that Trump made no connection between U.S. military aid to Kiev and the actions of the Ukrainian state prosecution.

Despite the self-evident absurdity of the basis for their impeachment drive, the Democrats are conducting hearings and taking testimony from federal employees in secret rooms, and barring their Republican colleagues from attending.

The media aren’t merely supporting this farce. They are taking a leading role in propounding it. Last week, the investigative journalism organization Project Veritas released recorded footage of CNN President Jeff Zucker instructing his top news executives to push the impeachment story in their programming. 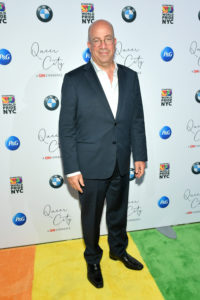 A transcript of a meeting in August between New York Times Executive Editor Dean Banquet and the paper’s editorial staff revealed a similar obsession at the Times with advancing the anti-Trump resistance.

The radicalization of the Democratic Party and party members in the media and government should be deeply worrying to Israel because as the party has radicalized it has shifted ever farther away from Israel. An event this coming weekend shows just how deeply and quickly it has abandoned its previous support for Israel.

Saturday, J Street will open its annual conference. J Street was founded in 2008 and calls itself a “pro-Israel and pro-peace” organization but like its precursor, its actions expose the falsity of its claim.

J Street was a key lobbyist for President Barack Obama’s nuclear deal with Iran, which was devastating for Israel. It has campaigned to defeat pro-Israel lawmakers and to elect anti-Israel lawmakers. For instance, in 2012, J Street actively campaigned against Reps. Joe Walsh and Allen West, two of Israel’s most outspoken supporters in the House.

In 2014, only 37 House members failed to support a House measure to fund Israel’s Iron Dome missile defense system. Eleven of them were supported by J Street.

While J Street claims that it opposes the anti-Semitic BDS campaign, its campus outfit J Street U does not act against BDS campus groups and activists. Politically, J Street has campaigned against anti-BDS legislation.

In 2014, a large majority of members of the Conference of Presidents of Major American Jewish Organizations voted against J Street’s request for membership. The decision was eminently reasonable: 95% of American Jews support Israel. The group that seeks to serve as the mouthpiece of the entire Jewish community could not permit an organization that deliberately undermines Israel to become a member.

Israel was not involved in the conference’s decision-making, but it is a testament to Israel’s concern about J Street’s growing legitimacy that Ambassador Ron Dermer reportedly does not meet with J Street representatives.

And they aren’t alone. Speaker of the House Nancy Pelosi and Senate Minority Leader Chuck Schumer are also scheduled to address the J Street audience. J Street’s ability to draw top Democrats, including the presidential candidates who refused to attend the AIPAC conference, makes clear just how comfortable the Democratic leadership has become with their party’s sharp turn away from Israel. This weekend the top Democrats will publicly identify with an organization whose easily discerned purpose is to water down and undermine the U.S.-Israel alliance.

These statements are noteworthy for two reasons. First, they show how ridiculous the impeachment hearings are. There is no substantive difference between Trump’s alleged use of U.S. military assistance to Ukraine as a means to coerce Ukraine to bow to his will and their intention to use U.S. military aid to Israel to achieve a similar outcome. But of course, Warren, Buttigieg and Sanders are coddled by the partisan media and left untouched by the bureaucracy. And Trump is being subjected to an impeachment probe.

The second noteworthy aspect of their threatened action is what it means for the future of U.S.-Israel ties in a post-Trump America. With the Democrats in the media and the federal bureaucracy now full partners in their party’s radical actions and initiatives, there is every reason to expect that after they finish with Trump, they will turn their attention to Israel.

Caroline Glick is an award-winning columnist and author of “The Israeli Solution: A One-State Plan for Peace in the Middle East.”
This article first appeared in Israel Hayom.