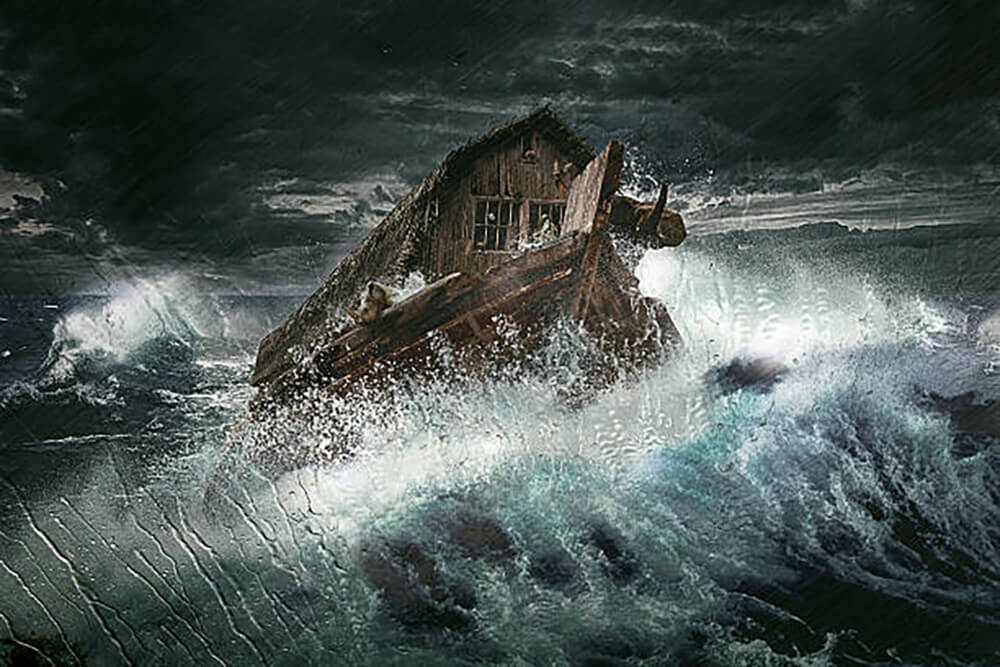 In order to understand both the mabul and the unique power of mikvah, we must first understand the spiritual concept of water. Photo Credit: iStockPhoto

Imagine you wake up in a hospital bed with amnesia, and haven’t the foggiest clue who you are. You try to recall your most recent memory and how you got here, but you can’t seem to remember. After a few seconds, you come to realize that you have no idea who you are. Suddenly, a few men enter the room and give you some shocking news. They tell you that you are the president of the United States, and that once you’re feeling better, they have some very important issues that you have to deal with. How would you feel? You’d probably hold your head pretty high, realizing that you are someone important. However, what if instead of addressing you as the president of the United States, those same people informed you that you were the hospital janitor; instead of awaiting your return to the oval office, they’re awaiting your return to the bathrooms on the second floor. How would you feel then? How would you think of yourself?

This idea connects to an important theme in this week’s parsha. A central question in Parshas Noach is why Hashem specifically chose to destroy the world with a flood. Hashem could have chosen any form of destruction, and yet, He chose water. We naturally associate parshas Noach with the mabul and the teivah, but couldn’t there have been another form of this story? What is the significance of water?

In Judaism, water is often associated with the mitzvah of mikvah, the requirement to immerse oneself in a natural water bath in order to cleanse oneself of spiritual impurity. What is the meaning behind this strange action? Washing oneself with water removes physical filth, but how does it have an effect on one’s spiritual state? In order to understand both the mabul and the unique power of mikvah, we must first understand the spiritual concept of water.

The Spiritual Concept of Water

The Maharal explains that the fundamental nature of water is that it’s formless. Water has no form of its own; it takes on the shape of its container. (It is pure chomer, without any tzurah.) The ocean has no pathways or markers, it is completely shapeless; unlike dry land which has paved paths formed within it.

This is because water represents the initial stage of every creative process. Before something becomes expressed, takes on form, and acquires shape, it resides in a formless and amorphous state. Only afterwards does a physical form emerge. This is why, during the original creation of the world, the Torah tells that initially there was only water. Only afterwards did the dry land emerge from the water.

This is the deep idea behind the mabul: Hashem was not destroying the world, He was recreating it. The Dor Ha’Mabul became so corrupted that Hashem decided to start over again with Noach alone. Hashem therefore immersed the world in water, so that it could go back into its primordial state of formlessness and void. Only once it went back into its original state could the dry land emerge once again from the waters, recreated. Only once the dry land emerged, and the world was birthed once more, did Noach leave the teivah.

This is also the deeper reason why each of us is surrounded by amniotic fluids when we are in our mother’s womb. Just as the creation of the physical world emerged from formless water, so too, each of us have our own creation story, and therefore emerge from our own waters. Our birth is like the birth of a new world (Sanhedrin 37a). When we are in our mother’s womb, the malach teaches us kol ha’Torah kulah (Niddah 30b). As the Vilna Gaon explains, this refers to the deepest realms of Torah, a transcendent Torah that is beyond this world, a Torah that is beyond the confines of shape and time. This Torah is the very root of reality, and you understood every aspect of it clearly. Not only were you shown this level of Torah, but you were also learning your specific share of Torah- you were being shown your unique purpose in the world, and how your unique role fits into the larger scheme of the human story as a whole. You were given a taste of your own perfection, of what you could, should, and hopefully will become. And from this transcendent realm, you were birthed into the physical world, emerging from these formless waters, with the mission to give form to everything you were shown in the womb, in your primordial and perfected state.

A further proof to this principle is the fact that Klal Yisrael had to enter the Yam Suf when leaving Mitzrayim. The commentaries point out that this journey through the Yam Suf appears to be pointless. After all, the Midrash explains that Klal Yisrael exited on the very same side that they entered! If Hashem simply wanted to destroy the Egyptians, there were plenty of far easier ways to accomplish this. What was the purpose of such a journey? The Maharal explains that Yetzias Mitzrayim was the creation and birth of the Jewish people. Thus, just as the creation and the recreation of the world emerged from water, the Jewish people had to be born from water as well. They therefore entered the water and emerged reborn. As the midrash explains, the splitting of the Yam Suf was like a pregnant woman’s water breaking. They entered as individuals, but emerged reborn as a nation. The entire world, the Jewish nation, and every single individual person has a creation story of emerging from formless water into concrete existence.

This also sheds light onto the unique mitzvah of entering the mikvah. When you immerse yourself in the water, you’re going back to a pure and formless state; the original state of perfection you possessed back in your mother’s womb. You are going back to your root, your higher self, your original source. In doing so, you “wash” off your spiritual impurity, reattaching yourself to your pure and root self. When you immerge, you immerge reborn, recreated, as if taking on form and shape for the first time. It is like the dry land emerging from the primordial waters.

This understanding sheds light on the many unique times that the mitzvah of Mikvah is mandated. A Jewish convert must immerse him or herself in the waters of a Mikvah as the final step in the conversion process. This is because a Jewish convert is considered to be born anew “(ger k’nolad dami”). The convert immerses in the mikvah, the medium of recreation, and emerges reborn. He entered as an old version of himself, and emerges anew–reborn, ready for a new way of life.

With this background, we can understand the prevalence of the number forty both in the story of the mabul and in relation to the mikvah in general. The mabul’s floods lasted for forty days, a kosher Mikvah requires forty se’ah (a biblical measurement) of water, and Chazal state that until forty days after conception, the fetus is “mayah b’almah”, formless and considered as if only water. What is the meaning behind these different aspects of forty, and what is the connection between them?

Moshe spent forty days and nights on Ha Sinai while he received the Torah- which was a reformation of reality itself. The Jewish people spent forty years in the midbar in order to recreate their identity and ready themselves to enter Eretz Yisrael. This is also why the Gemara states that forty is the age of chochmah- wisdom. Knowledge is the attainment of endless formless facts and details; wisdom is sourcing all expressed details and facts back to source principles and concepts, giving form and meaning to the formless chaos.

Fetal Fluids and the Shofar

Strikingly, the word “shofar” shares a root with “mei shafir”, the amniotic fluid which surrounds the fetus while in the womb. The shofar is a wake up blast, meant to shake us out of our stupor and bring us back to our real self. When we hear the shofar’s deafening cry, we yearn to return to our source, to our higher selves. The word “shofar” shares a root with “li’shaper”, to perfect and beautify. When we blow the shofar, we are reminded to improve and perfect ourselves, to return to our fetal state of perfection we once knew, to return to our true selves.

Amazingly, we start blowing shofar on Rosh Chodesh Elul and our final shofar blast is during the climax of Yom Kippur. It is no coincidence that there are a total of forty days from Rosh Chodesh Elul through Yom Kippur. These forty days are the gestation and formation of the rest of our year. Yom Kippur marks our rebirth, our recreation, where we take on newfound form and enter the year with newfound purpose.

[It’s also amazing to look at the Hebrew word for mother- “eim”, comprised of an alef and a mem. Mem is the gematria- numerical value- of forty. The mother creates the space within her for a child to form and come into existence. She takes the “alef” (a spark of potential- with the gematria of one) and gives it the opportunity to expand from potential and formlessness into actual concrete physical existence.]

We don’t need to have amnesia to recreate our identity. Every day, we get to choose who we are, what we believe in, and how we are going to live our lives. Each morning we get to create our identity. We don’t have to continue making the same mistakes again and again. Each day, we can restart anew. As Avraham, who makes his first appearance at the end of this week’s parsha, said, “anochi afar v’efer”- I am but dirt and ashes. Most people understand this to mean that Avraham was a humble man. However, there is a deeper explanation as well. Ashes represent an elemental breakdown of something. Dirt represents the starting point of growth, the place where seeds are planted.

Avraham was saying that every day he would “ash” himself, breaking himself down into his elemental and root form, and then plant himself anew in a field of dirt. In other words, Avraham would recreate himself every single day. He never continued living on the same way simply because he had done so yesterday. Each and every day, he looked deep within himself, broke himself down, and recreated himself anew. May we all be inspired to embark on a journey of genuine “afar vi’efer”, finding excitement and meaning in our constant growth and internal recreation.

Shmuel Reichman is an inspirational speaker who has lectured internationally at shuls, conferences, and Jewish communities on topics of Jewish Thought and Jewish Medical Ethics. He is the founder and creator of “Shmuel Reichman Inspiration: Think. Feel. Grow.”, a platform from which he shares inspirational Torah videos that have reached over one hundred thousand people. You can find more inspirational lectures, videos, and articles from Shmuel on Yutorah.org, Facebook, and Youtube, and he can be reached at [email protected]