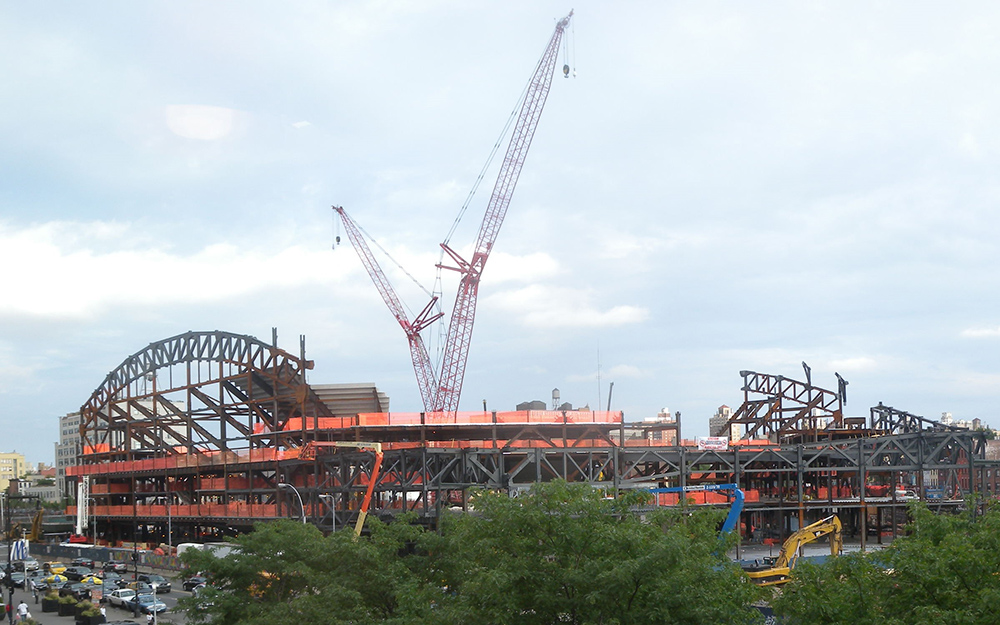 Begun nearly 15 years ago under the name Atlantic Yards, construction is now set to begin in months.

Development rights to several of the complex’s building sites are controlled by Greenland Forest City Partners. To come is what the New York Post described as “a long-awaited platform over the site’s sunken LIRR train yard,” according to Greenland group’s Executive VP Scott Solish.

Pacific Park is a mixed-use commercial and residential development project that will consist of 17 high-rise buildings, under construction in Prospect Heights, adjacent to Downtown Brooklyn and Fort Greene in Brooklyn, New York City. The project overlaps part of the Atlantic Terminal Urban Renewal Area, but also extends toward the adjacent brownstone neighborhood. Of the 22-acre project, 8.4 acres is located over a Long Island Rail Road train yard. A major component of the project is the Barclays Center sports arena, which opened on September 21, 2012.

“Of 15 planned buildings, only five have opened so far. But a sixth is going up now, and the completed deck will finally allow work to start on three more to rise along the complex’s Atlantic Avenue side between Sixth Avenue and Pacific Street,” according to the Post. “The development partnership also shared for the first time an image of four new apartment towers and a public park on the 22-acre site east of Barclays Center where Atlantic and Flatbush avenues converge. One tower, 18 Sixth Avenue, is under construction and due to open in late 2021 or early 2022. That $649 million project is a joint venture of Greenland Forest City Partners and the Brodsky Organization, as The Post first reported.”

It was just over a year ago that Hu Gang, President and CEO of Greenland USA, released a statement that said Pacific Park was “an important development and we are committed to continuing to deliver the

terrific mixed-use community that we have begun to build in the heart of Brooklyn. We’re proud of the significant progress we’ve already made–particularly providing much needed affordable housing and local retail–and with the completion of this restructuring are ready to immediately build on this momentum.”

“The restructuring aligns with our strategy of maintaining an overall lower level of development activity, even as we remain fully committed to, and engaged in the joint venture,” added David J. LaRue, President and Chief Executive Officer of Forest City Realty Trust. “The restructuring also keeps remaining entitled development on track to achieve our shared vision for Pacific Park. Forest City continues to believe strongly in the New York market – one the strongest and most resilient real estate markets in the country – and we continue to have a significant presence and portfolio there.”