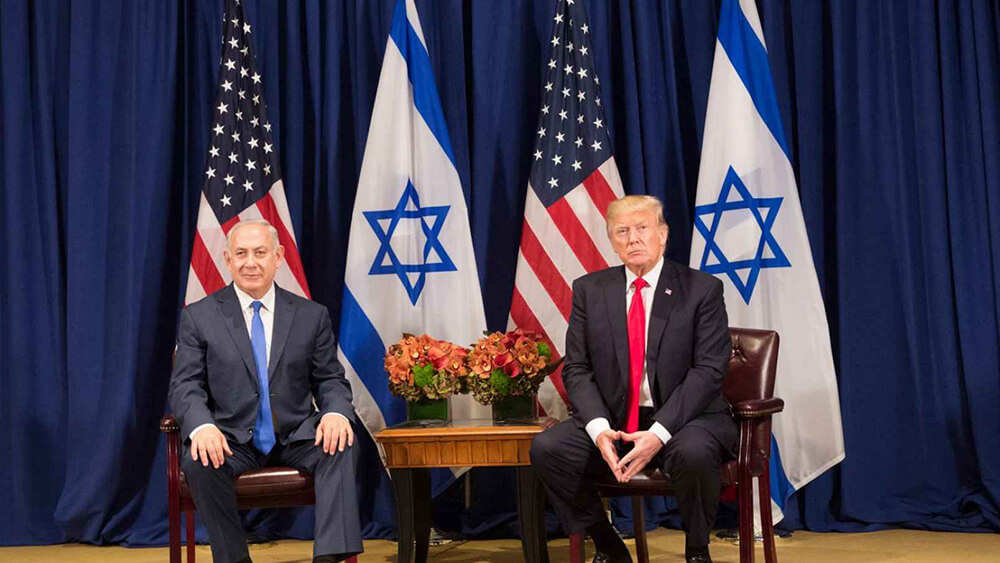 The difference between a flailing democracy and a resilient one

House Speaker Nancy Pelosi’s recent announcement that she is opening an official impeachment inquiry against President Trump struck many Israelis as yet another sign that Israeli Prime Minister Benjamin Netanyahu and Trump are in the same boat. Both are being hounded by legal elites who will stop at nothing to oust them from office.

There are parallels between the two leaders. 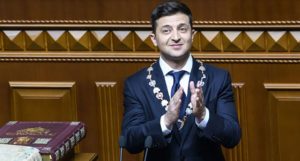 Ukraine’s President Volodymyr Zelensky applauding during his inauguration ceremony at the parliament in Kiev on May 20, 2019. PHOTO: Vladyslav MUSIENKO / Ukrainian Prime Minister Press-service

Pelosi’s move followed the leak of a whistleblower complaint to the U.S. intelligence community’s inspector general. The complainant alleged that during a telephone conversation with Ukrainian President Volodymyr Zelensky in July, Trump sought the Ukrainian leader’s assistance in advancing his 2020 re-election prospects. This is arguable.

During the call, Trump asked Zelensky to speak with U.S. Attorney General William Barr about the private cybersecurity company Crowdstrike. Crowdstrike is the private contractor that was hired by the Democratic National Committee in the spring of 2016 to investigate the hack of the DNC’s computer server.

Crowdstrike concluded that the DNC’s server was hacked by entities related to the Russian government. The DNC never permitted federal investigators to take possession of the breached server or receive Crowdstrike’s full report. Despite the fact that they were never given the opportunity to verify Crowdstrike’s claims, those claims were the basis of the U.S. intelligence community’s assertion in December 2016 that the Russian government hacked the DNC server to interfere in the 2016 election. It was also a foundation of the claim that the Trump campaign colluded with Russia against the Hillary Clinton campaign in 2016.

In his conversation with Zelensky, Trump said, “Our country has been through a lot and Ukraine knows a lot about it. I would like you to find out what happened with this whole situation with Ukraine, they say Crowdstrike … the [DNC] server, they say Ukraine has it. … I would like to have the attorney general call you or your people and I would like you to get to the bottom of it.” 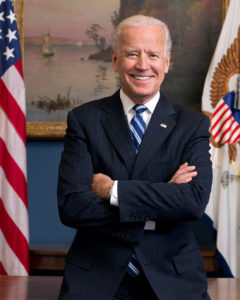 During his tenure in office, Biden was responsible for U.S. ties with Ukraine. As investigative journalist Peter Schweitzer reported, in April 2014, Biden’s son Hunter was appointed to the board of Burisma, a Ukrainian gas company. Over the next 16 months, Burisma paid Hunter Biden $3.1 million. Biden joined the company while Burisma was under criminal probe by British and Ukrainian investigators.

Democrats claim that Trump’s discussion with Zelensky constitutes an illegal solicitation of foreign assistance for his 2020 reelection campaign. Republicans counter that Trump was reasonably trying to understand what happened to the DNC server in 2016. The story has served as a basis for claims that his presidency is illegitimate, and continuous investigations of his campaign.

Leaving aside the weight of the opposing claims, the fact is that there is nothing unique about Trump’s actions. As Mark Thiessen noted in The Washington Post, in 2018, three Democratic senators urged the Ukrainian government to continue investigations into Trump’s alleged collusion with Russia during the 2016 presidential campaign.

National Review noted that during the 2016 campaign, the Obama administration asked the Ukrainian government to open a criminal probe against Trump’s campaign chairman Paul Manafort. So too, revelations regarding the origins of the Trump-Russia probe which fomented the nearly two-year special counsel investigation showed that the Obama Justice Department based wiretap requests against Trump campaign officials on a dossier paid for by the Clinton campaign and the DNC, and compiled by a former British spy on the basis of contacts with Russian operatives.

Democrats calling for impeachment have never shown the slightest interest in investigating the Obama administration’s actions. No Democratic lawmakers called to impeach Obama or members of his administration.

In Case 2000, Netanyahu is accused of having breached the public faith when he met with Yedioth Ahronoth publisher Arnon Mozes in an effort to secure positive media coverage. Yedioth’s coverage of Netanyahu has been unstintingly negative. In Case 4000, prosecutors allege Netanyahu accepted a bribe in the form of positive media coverage on the Walla news portal from Walla owner Shaul Elovich. As with Yedioth Ahronoth, Walla coverage of Netanyahu has been almost uniformly hostile.

Leading jurists from professor Alan Dershowitz of Harvard University to professor Avi Bell from Bar-Ilan University agree that the legal proceedings against Netanyahu are political and based on prejudicial and selective enforcement of statutes which prosecutors are interpreting inventively.

As is the case with the allegations related to Trump’s dealings with Zelensky, the first problem with the probes against Netanyahu is that his actions were far from unique—although less successful than similar actions by other politicians.

In just one striking example of the inherent bias of the charges against Netanyahu, consider the behavior of the prosecutors in relation to Blue and White Party co-chairman and Yesh Atid Party leader Yair Lapid and his relations with Mozes and Elovich. 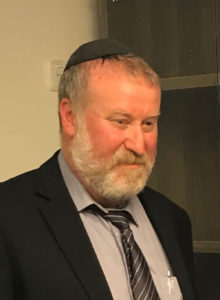 Today, post-election wranglings in Israel over governing coalitions are guided by varied assessments of the likelihood that Attorney General Avichai Mandelblit will indict Netanyahu. During the campaign leading up to the April elections, Mandelblit cast legal norms distinguishing politics from law to the seven winds. He took the unprecedented step of announcing that pending the outcome of Netanyahu’s pre-indictment hearing, which is scheduled for this week, he intends to indict the premier on bribery and breach of trust charges over his dealings with Mozes and Elovich.

Now, as Netanyahu prepares for his pre-indictment hearing, the prosecution has leaked its intent to indict Netanyahu by mid-November. In other words, they have no intention to consider Netanyahu’s defense claims. The outcome is preordained.

For many Israelis, Pelosi’s decision to begin an impeachment investigation parallels moves by Mandelblit and State Attorney Shai Nitzan to fast-track the probes against Netanyahu. But the opposite is the case.

Pelosi’s impeachment bid is a sign that America’s legal system and indeed its democracy is far healthier than Israel’s.

For nearly two years, Special Counsel Robert Mueller and his partisan investigators spent millions of dollars on a massive and barely veiled bid to find a legal excuse to oust Trump. But in the end, they failed. The evidence of collusion between Trump and his campaign and Russia simply wasn’t to be found.

Mueller could have kept going. The media wanted him to. The Democrats wanted him to. But after feeding the media prejudicial leaks against Trump and aggressively prosecuting Manafort and other Trump officials on unrelated issues, Mueller ran out of steam. Although in his final report Mueller tried to provide Democrats with the means to continue the Russia probe on the political level, he closed down his investigation and went home. U.S. practice doesn’t permit the indictment of a sitting president. But even if it allowed for indictments, the materials he had assembled were too weak to justify an indictment.

In other words, Mueller walked his prosecutors to the brink of political interference, and then he walked them back. He did not replace politicians with prosecutors.

Until Mueller submitted his report, Pelosi used his ongoing probe to fend off pressure from the increasingly powerful radical members of her Democratic caucus to initiate impeachment proceedings against Trump. Since then, Pelosi argued, rightly, that impeachment proceedings require a huge political investment and hold little chance for success. Most Americans oppose impeaching Trump. The Republicans control the Senate. If the House votes to impeach Trump, chances of getting the two-thirds majority of senators required to convict an impeached president and remove him from office are effectively nonexistent.

Unfortunately for Pelosi, the Democratic base—including the media and the empowered radical faction of her Democratic caucus—have become deaf to reason. According to a Politico poll, whereas 70% of Democrats support impeachment, only 37% of the public does. The likes of Reps. Anastasia Ocasio-Cortez and Rashida Tlaib, like The New York Times and The Washington Post, live in an echo chamber. Members of the echo chamber are so cut off from those outside it that just as they cannot fathom anyone objecting to socialism, so they cannot imagine that anyone supports Trump or accepts the validity of the 2016 election results.

This then brings us back to Israel. 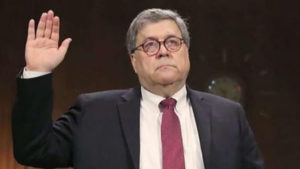 Like Pelosi and her colleagues, Blue and White leaders Benny Gantz and Lapid and their colleagues on the left claim that the very fact that Netanyahu is under investigation renders him illegitimate. They refuse to form a unity government with Likud unless Netanyahu is first ousted as Likud leader.

But unlike Pelosi, Gantz and Lapid don’t need to make their claims themselves. Lapid, whose ministers gave preferential treatment to Yedioth through government advertising contracts and received glowing coverage in the paper, does not have to argue the case for impeaching Netanyahu. He stands behind the ostensibly objective state prosecutions.

Pelosi’s decision to open impeachment proceedings against Trump despite the great political risk involved going into an election year indicates that the radical faction has swallowed the Democratic Party. But more importantly, her move is a testament to the abiding power and fortitude of American democracy. The difference between the situation in Israel, where prosecutors happily abuse their legal power for transparently political aims, and the United States, where politically motivated prosecutors backed away from the brink and compelled politicians to take over their political investigations, is the difference between a flailing democracy and a resilient one.

Caroline Glick is an award-winning columnist and author of “The Israeli Solution: A One-State Plan for Peace in the Middle East.”