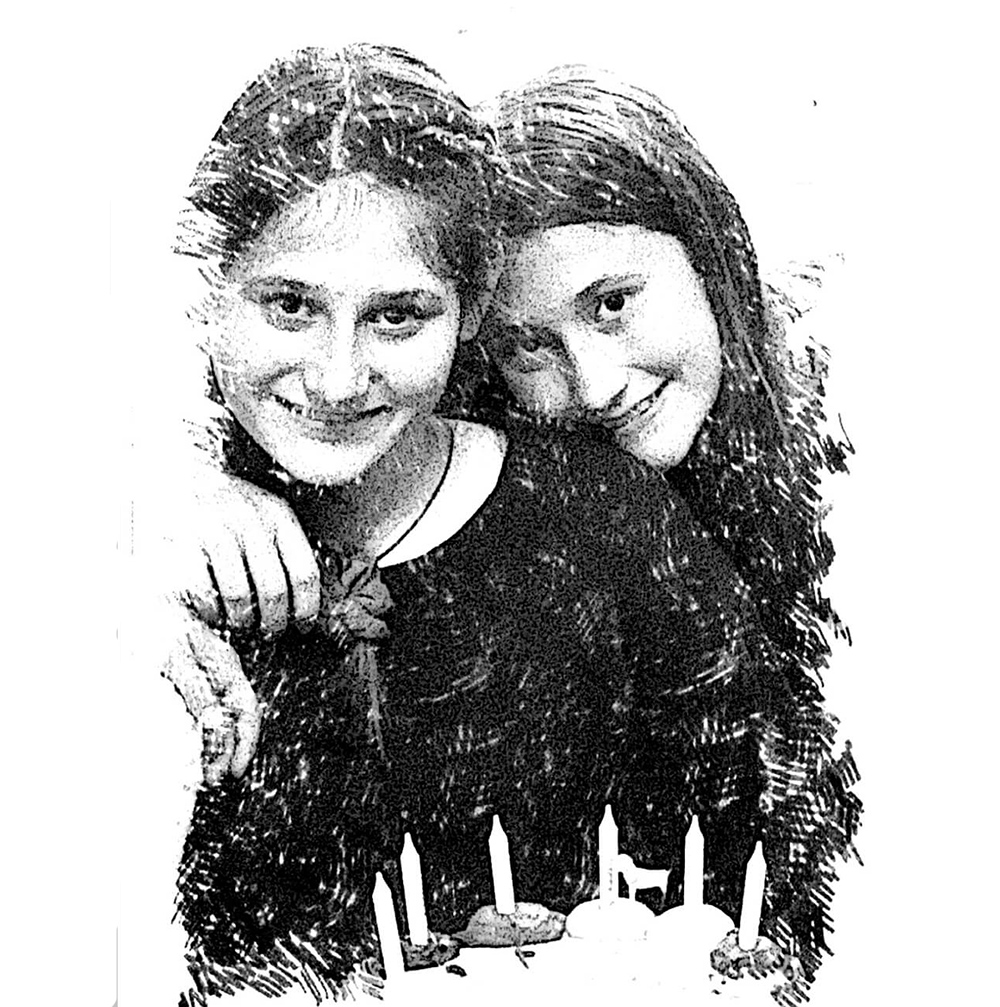 The author’s daughter and her sister.

Masada can stir up many emotions in visitors, but typically joy isn’t one of them. Not for most people who make a pilgrimage to this humbling tourist attraction, where centuries ago Jewish families and rebels committed mass suicide in the face of a Roman army siege. And yet that’s what I felt last March as I stood atop that parched, rocky plateau overlooking the Dead Sea, alongside my daughter and mother. 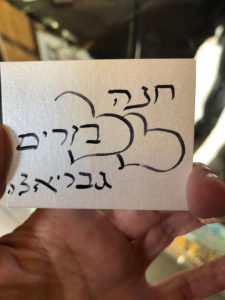 The author writes: “A Simchat Bat took place, and my daughter was given her Hebrew name.”

My and my daughter’s passports may read Capasso, courtesy of a marriage that no longer is, but in truth we’re Booksteins through and through. We were gathered at the site of tragedy for something joyous—a tri-generational Bat Mitzvah.

The decision to go had been made months earlier.

I felt it was time to rectify what I hadn’t done when I was my child’s age, and my mother followed suit. . And so it was, on March 3rd of this year, that three generations—my mother, my daughter, and I—simultaneously became Bat Mitzvahs. It’s a moment I will never forget: a fusion of past, present and future. We had traveled to Israel because it was important to me that my daughter knows her heritage, but it was not until I reached Masada, that I fully understood the implications: in order to truly celebrate one’s heritage, one first must know their own origins.

My daughter was conceived via the use of an anonymous sperm donor.

Albeit unconventional to some, to my family her birth represented a gift from G-d. My parents’ only daughter produced their fifth grandchild—at the time, their first and only granddaughter. And so, a Simchat Bat took place, and my daughter was given her Hebrew name.

Infertility is a Jewish problem. According to the Jewish Fertility Foundation, the rates of infertility within the Jewish community are higher than the national average (one out of six Jewish couples suffer infertility, compared to one out of eight couples overall). Roughly 10 percent of women in the United States between the ages of 15 and 44 have trouble getting or staying pregnant, according to the Centers for Disease Control and Prevention. That amounts to 6.1 million women, a figure that doesn’t even address male infertility—which accounts for one-third of fertility issues. Still, infertility is often perceived as a shameful condition, suffered in silence.

While statistics are inaccurate, the use of donor gamete (donor egg & donor sperm) has grown exponentially worldwide. Over a quarter century ago (long before diverse family structures began utilizing donated sperm and eggs), one study estimated that roughly 30,000 children were born annually through the use of donor gamete. Perhaps the numbers more likely approach 60,000, but because this multi-billion dollar industry lacks external regulation, the actual numbers are impossible to estimate. We only know that business is booming for donor sperm and donor egg banks, and that the secrecy and shame often experienced by the recipient, has helped created a Wild West frontier in the world of fertility.

Using donor gamete, specifically donor sperm, is not a new process. The first recorded insemination dates back to 1884. Historically, parents were told not to discuss the use of a donor with anyone, including the child. Since the birth of donor conception, countless children were conceived never knowing they were not genetically related to one or both of their parents. 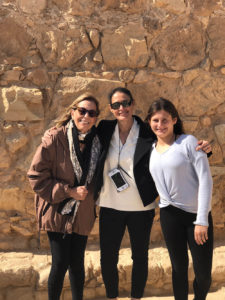 When I set out on my journey to conceive I chose a “Willing-To-Be-Known” sperm donor. That means he had consented to meet interested offspring upon the child reaching the age of 18. At the time many urged me to use an anonymous donor to ensure he would never be in the child’s life. All I could think was: If having a genetic tie to your offspring was important enough to use donor gamete, how could you not acknowledge this importance to the child?

Whether or not my daughter would ever actually choose to meet her donor was irrelevant—what was critical was her having the right to make the choice herself. So from the moment I brought her home from the hospital, I spoke of her donor. Nightly, we’d say goodnight to him—we’d speak of our gratitude and wish him well. Often I would remind her, he was her donor, not her dad, a distinction I made very clear. I didn’t know a lot about donor conception back then, but I knew one thing for sure—being conceived through the use of donor sperm should never be hidden, or denied. It should be something she always knew about.

Obviously, there were age appropriate ways of doing this, so phrases changed over the years—but by using the word “donor” early and often, it took the fear out of it for both of us. It would simply become part of her birth story that she was familiar with, and I wouldn’t be sitting around dreading the day she’d find out.

I eventually learned of the Donor Sibling Registry (donorsiblingregistry.com), a website dedicated to connecting donor-conceived individuals with donor-related siblings and donors themselves. Through that site, I was connected with another family who shared the same donor. My daughter was four when I received their message.

They wanted to meet.

Their email included pictures of their children, and as the image of their oldest daughter popped up on my computer screen, I was stunned. For a moment I thought I was staring at my own child… or her doppelganger. This changed everything. It was no longer a case of throwing caution to the wind. These girls were undeniably linked—they were half sisters, who looked like twins— and they had the right to know each other.

This was uncharted territory. No one had written a guidebook on how to handle such situations. Naturally, my Jewish parents thought I was meshugana: they were entirely opposed to my introducing their granddaughter to perfect strangers. While there was no convincing them otherwise, it did beg the question (that I most certainly asked them), “Would you have me determine when the time would be appropriate to introduce her to her own cousins??” I tried to explain that their granddaughter shared more DNA with these donor siblings than she did her cousins, but there was no point. To not allow my daughter to meet these children would be like stealing years of something precious away from her. And it would be a lie.

Nine years, three additional families, and several “extended family reunions” later, I know I made the right decision. By talking about her conception early and often, and by introducing her to those all linked by the same donor—the same genetic heritage—I have celebrated her life’s story. 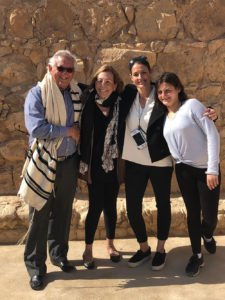 Traveling to Israel reconnected me to my heritage. It brought me back in touch with Judaism and its values. We speak of Birthright—“Taglit”— the Hebrew word for discovery. Millions have been spent sponsoring free ten-day “heritage” trips to Israel, to encourage young adults to discover and connect to their Jewish history and culture. This program exists in the belief that it should be every person’s birth-given right to know where he or she comes from.

I believe having that knowledge is true historically, culturally, religiously—and genetically. Not knowing can actually cause disorders like “genealogical bewilderment,” a term, coined by psychologist H.J. Sants in 1964, referring to the struggle of children who have uncertain, little, or no knowledge of one or both of their natural parents. As his and other research suggests, our genetic ancestry helps shape our identity, and normal psychological development depends on our knowing that genealogy.

As Rosh Hashana approaches, the birth of a new year, the story of earth’s creation and the return to the beginning of the Torah, this message seems pertinent.

If you are the parents of a donor-conceived child, I urge you to tell that child about his or her conception early and often. Celebrate that birth story! Whether we like it or not, the age of secrecy, and anonymity is over. Between the Donor Sibling Registry and at-home DNA kits, increasing numbers of donor-conceived children and adults are finding their donor siblings—and their donors—every day. With a simple swab of a cheek, you can get your DNA and upload it onto sites for the fun of finding out your ethnic makeup…only to get a message from another person saying, “Hello, we’re a genetic match—I’m your half sister.” Or “I’m your son.” For those who know nothing of their true genetic origins, that news can be devastating.

Standing on Masada confirmed that we should tell our origin stories with pride. After all, the only way to celebrate our heritage is to know our heritage—all of it. Even those details considered awkward or painful. We tell the story of Masada with reverence, despite its gut-wrenching subject matter. We haven’t crumbled under the weight of that—or any other—painful memory. Our heritage defines us as a people, and gives us a sense of history and strength. Which, as it turns out, is just what I want for my daughter.