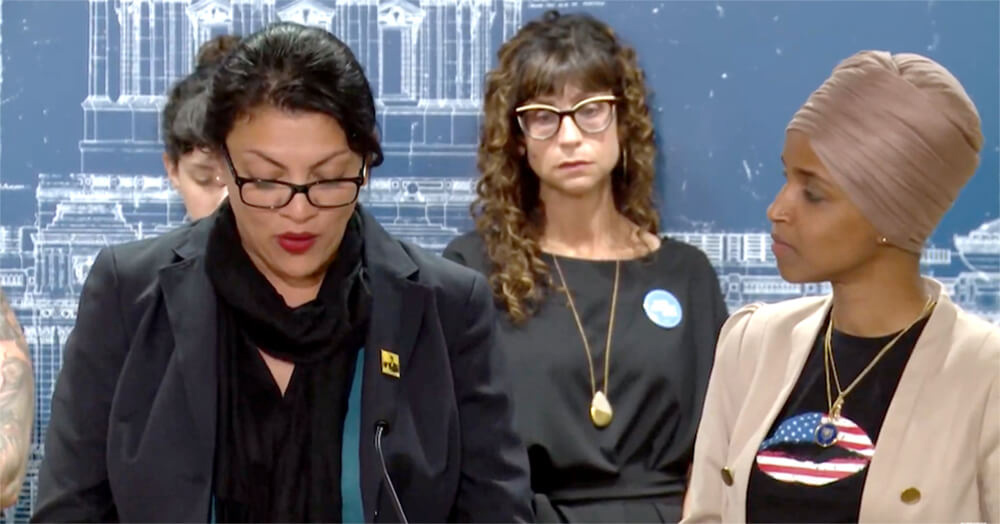 Reps. Ilhan Omar (D-MN) and Rashida Tlaib (D-MI) continue to rail against Israel’s decision to deny them entry last week. The two congresswomen have given their imprimatur to the BDS movement which is specifically aimed at isolating the Jewish state from an economic, political, academic and cultural perspective; with the ultimate objective being the complete destruction of Israel. Photo Credit: Screenshot

Reps. Ilhan Omar (D-MN) and Rashida Tlaib (D-MI) continue to dominate the headlines this week as the two members of “The Squad” held a press conference on Monday, railing against Israel’s decision to deny them entry last week. The decision to deny them entry was predicated on the fact that the two congresswomen have given their imprimatur to the Boycott, Divestment and Sanctions (BDS) movement. BDS is specifically aimed at isolating the Jewish state from an economic, political, academic and cultural perspective; with the ultimate objective being the complete destruction of Israel.

On Tuesday, Trump doubled down on his criticism of Tlaib in a tweet. Referencing the press conference that Tlaib and Omar had on Monday in which the Michigan Democrat became emotional when she recalled visiting her grandmother in the West Bank as child, Trump said:

“Sorry, I don’t buy Rep. Tlaib’s tears. I have watched her violence, craziness and, most importantly, WORDS, for far too long. Now tears? She hates Israel and all Jewish people. She is an anti-Semite. She and her 3 friends are the new face of the Democrat Party. Live with it!”

Trump’s tweets on Tuesday came after coverage of the press conference played out on Fox News throughout the morning.

At an Oval Office meeting on Tuesday with Romanian President Klaus Iohannis, Trump told reporters in answer to their questions that he thinks that “any Jewish people that vote for a Democrat, I think it shows either a total lack of knowledge or great disloyalty.”

Almost 80 percent of Jews voted for Democratic party candidates in November’s midterm elections; signifying a disdain for the Republican agenda and the policy positions of the Trump administration.

According to a JTA report, Trump was queried by members of the White House media pool in the Oval Office about remarks that Omar and Tlaib have made concerning Israel.

He retorted with “You should see the things the four of them have said about Israel over the last couple of years,” the president said, referring to the other two as congresswomen as Rep. Alexandria Ocasio-Cortez (D-NY) and Rep. Ayanna Pressley (D-MA).

According to a FOX News report, the Monday afternoon press conference was held at the Minnesota State Capitol Building with Palestinian-American and Jewish-American residents of Minnesota who said they also have been affected adversely by travel restrictions to Israel and the Palestinian territories.

Tlaib, who is Palestinian American and an outspoken Trump critic, later requested and was granted a waiver to visit her grandmother in the West Bank. She reversed course a day later after speaking with her family and announced she would not go. 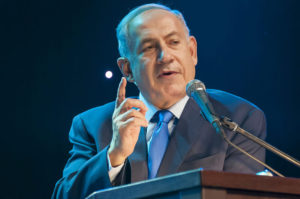 Israeli Prime Minister Benjamin Netanyahu has said that Tlaib and Omar’s itinerary “revealed that they planned a visit whose sole objective is to strengthen the boycott against us and deny Israel’s legitimacy.” He said Israel welcomes critics with the exception of those who support boycotts of the Jewish State. Photo Credit: Shutterstock

According to a press statement that was issued last Thursday, Israeli Prime Minister Benjamin Netanyahu, Foreign Minister Israel Katz and Minister of Strategic Affairs Gilad Erdan explained that “the State of Israel respects the U.S. Congress, as part of the close alliance, but it is inconceivable that anyone who wishes to harm the State of Israel will be allowed” to visit.

Last Thursday morning Trump tweeted: “It would show great weakness if Israel allowed Rep. Omar and Rep.Tlaib to visit. They hate Israel & all Jewish people, & there is nothing that can be said or done to change their minds. Minnesota and Michigan will have a hard time putting them back in office. They are a disgrace!”

“Israel has decided. We won’t enable the members of Congress to enter the country,” Deputy Foreign Minister Tzipi Hotovely told Kan News last week. “We won’t allow those who deny our right to exist in this world to enter Israel. In principle, this is a very justified decision.”

Omar and Tlaib reportedly, had been coordinating their proposed visit with Palestinian figures, such as PLO representative Hanan Ashwari, as was reported by WIN.

As was reported by World Israel News, the decision to bar the two congresswomen reflects Israel’s concern over potential incitement their presence may cause while they are in Israel or in the Palestinian-administered territories.

Netanyahu has said that Tlaib and Omar’s itinerary “revealed that they planned a visit whose sole objective is to strengthen the boycott against us and deny Israel’s legitimacy.” He said Israel welcomes critics with the exception of those who support boycotts of the Jewish State.

At the joint press conference that Tlaib and Omar held on Monday, the Michigan Rep appeared to hold back tears during her address to the media as she and Omar condemned Israel’s recent decision to impose restrictions on visiting the country, according to a FOX News report. They are also calling for Congress to take a larger role in this issue.

“We in the United States have a constructive role to play,” Omar said at the news conference in St. Paul, Minn. “We give Israel more than $3 billion in aid every year. This is predicated on them being an important ally in the region, and the only democracy in the Middle East. But, denying a visit to duly elected members of Congress is not consistent with being an ally.”

“As a young girl visiting Palestine to visit my family I watched as my mother had to go through dehumanizing checkpoints even though she was a United States citizen and proud American,” Tlaib said, becoming emotional.

Referencing recent conversations with her Palestinian grandmother, who she had planned to visit on the trip, Tlaib choked up according to the Fox News report. “She said I’m her dream manifested. I’m her free bird so why would I come back and be caged and bow down?”

Omar said that the purpose of the press conference was to “highlight the human costs of the occupation and travel restrictions on Palestinians and others.”

Omar suggested that lawmakers reconsider the annual U.S. aid allocated to Israel after they were prohibited from entering. Those sentiments about cutting aid to Israel were echoed by 2020 presidential hopeful, Democratic Senator Bernie Sanders (I-VT).

Omar and Tlaib have in the past made statements that included anti-Semitic tropes, have supported anti-Israel groups, and have questioned Israel’s right to exist as an independent and sovereign Jewish state.

In July, Omar introduced a House resolution in support of BDS, which Tlaib co-sponsored. Tlaib compared the BDS movement to boycotts against Nazi Germany.

Omar has insinuated that the AIPAC pro-Israel lobby group in Washington pays off members of Congress to support Israel. She and Tlaib have close ties with CAIR, the Council of American-Islamic Relations, which is believed to be linked with the Hamas terror organization.

Tlaib also drew backlash from conservatives earlier this year for comments about the Holocaust when she said it gave her a “calming feeling” to think of persecuted Jews finding safe haven in Israel, according to a FOX News report.

The president and his allies have sought to spotlight the notion that Tlaib, Omar and Reps. Alexandria Ocasio-Cortez (D-N.Y.) and Ayanna Pressley (D-Mass.) are the new faces of the Democratic Party and that Israel will no longer enjoy bipartisan support in Congress.

Firing back after the press conference on Monday, White House spokesman Hogan Gidley said, “Congresswomen Rashida Tlaib and Ilhan Omar have a well-documented history of anti-Semitic comments, anti-Semitic social media posts and anti-Semitic relationships. Israel has the right to prevent people who want to destroy it from entering the country – and Democrats’ pointless congressional inquiries here in America cannot change the laws Israel has passed to protect itself.”

Fox News reported that according to a McClatchy report that appeared over the weekend, some congressional Democrats were seeking to retaliate against Israel for their decision to ban the entry of their colleagues. The report indicated that they planned to consider legislative action against Ron Dermer, Israel’s ambassador to Washington, and David Friedman, the U.S. ambassador to Israel. That could include a possible vote on a statement of no confidence in Dermer, as well as calls for the opening of an inspector-general investigation into Friedman.

As this issue continues to mushroom, celebrities and cultural figures are also weighing in with their strongly held opinions. 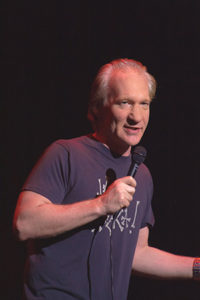 On his HBO program on Friday night, comedian Bill Maher said of the BDS movement, “It’s predicated on this notion, I think — it’s very shallow thinking — that the Jews in Israel, mostly white, and the Palestinians are browner, so they must be innocent and correct, and the Jews must be wrong. As if the occupation came right out of the blue, that these completely peaceful people found themselves occupied.” Photo Credit: Shutterstock

On his HBO program on Friday night, irreverent comedian Bill Maher pointed out the blatant hypocrisy of such BDS apologists as Tlaib and Omar. He proffered some cogent arguments in defense of his position. He chastised the BDS proponents for their willingness to ignore their own biases and tendentious posture towards Israel while theorizing that their natural inclination is to take the side of the Palestinians in the protracted Middle East conflict because of their skin color, religion and ethnicity.

Of the BDS movement, Maher said on his program: “It’s predicated on this notion, I think — it’s very shallow thinking — that the Jews in Israel, mostly white, and the Palestinians are browner, so they must be innocent and correct, and the Jews must be wrong. As if the occupation came right out of the blue, that these completely peaceful people found themselves occupied.”

Immediately subsequent to Maher’s biting commentary, Rep Rashida Tlaib responded to Maher by calling for a boycott of his program because he publicly disagreed with her strident animus towards Israel and that of her colleague Rep Ilhan Omar.

Taking to Twitter on Saturday night Tlaib referenced Maher’s statement by saying, “I am tired of folks discrediting a form of speech that is centered on equality and freedom. This is exactly how they tried to discredit & stop the boycott to stand up against the apartheid in S. Africa. It didn’t work then and it won’t now.”

On Sunday, Ronald Lauder, the president of the World Jewish Congress, issued a press release saying that his organization finds Tlaib’s suggestion of a boycott of Maher’s program “deeply disturbing.”

Focusing on Tlaib’s vocal support for the BDS movement Lauder said: “Serious questions need to be asked about Tlaib’s motivation in supporting the extremist BDS Movement, which is allied with terrorists and is not shy about its ultimate aim of destroying Israel.”