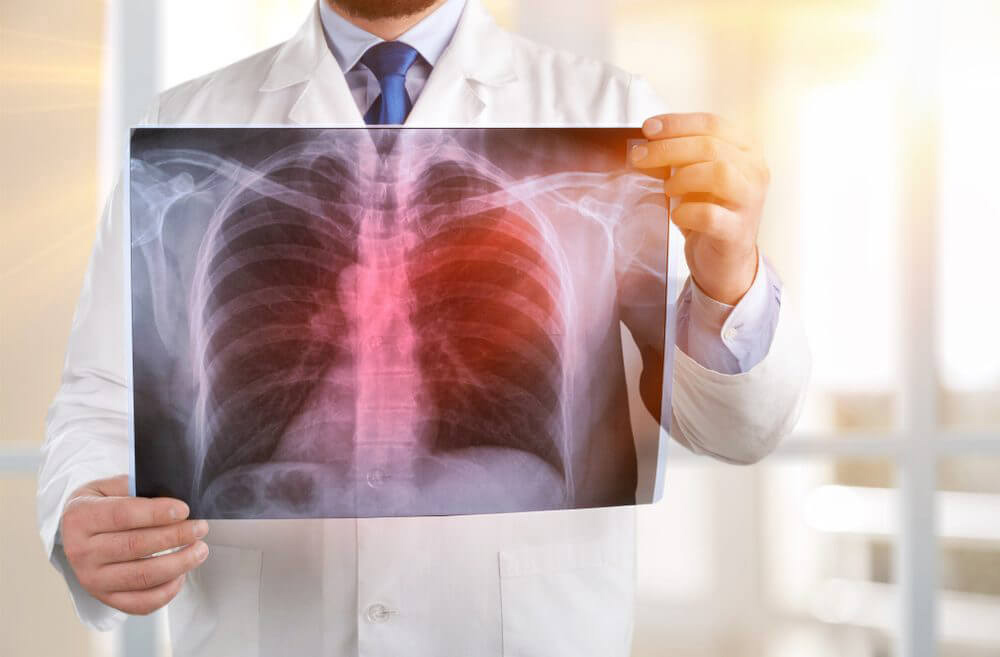 Image of lung cancer via Shutterstock.com

Of all cancers, lung cancer is the deadliest, largely because it is so difficult to diagnose early on. With very few nerve endings in the lungs, this type of cancer doesn’t cause painful symptoms until a tumor has grown quite large – and by that time, it’s often too late.

“If the cancer is detected at stage 1, the survival rate is 80 percent,” explains Giora Davidovits, CEO of Israeli startup Savicell, which is developing a new blood test to diagnose lung cancer.

Davidovits explains that most lung cancers found early are usually the result of a patient undergoing radiological imaging for an entirely different issue.

When a physician suspects lung cancer, a CT scan is done. If a lump (nodule) is found, a biopsy is the only way to really know what’s going on. However, since 95% of nodules are benign, and since the biopsy is a risky, highly invasive procedure, doctors prefer to wait and see if the CT finds changes over time. If it does – and it is cancer – the final diagnosis can be at a tragically late stage.

Savicell’s alternative, a simple blood test that can detect lung cancer, is part of a fast-growing specialization known as “liquid biopsy” – a market worth some $1.2 billion in 2018, according to Zion Market Research.

Most liquid biopsies are based on sequencing a patient’s genetic material (such as DNA and RNA) to search for any cancerous material that a tumor secretes. That can be hard to find.

“These kinds of tests are very good at defining disease and showing which genetic segments have been impacted,” Davidovits explains. “But they have difficulties when it comes to early detection at stages 1 and 2.”

Savicell takes an entirely different approach. Rather than gene sequencing, Savicell measures the metabolic state of immune cells circulating in the blood – that is, how energy is used by the cell.

This new field – known as immunometabolism – has revealed that immune cells take on specific metabolic “signatures” when they encounter different diseases.

Savicell has developed a diagnostic kit with 384 “wells,” each containing one of 16 chemical stimulants in increasing concentrations. When immune cells drawn from a patient’s blood come in contact with the stimulants, they use energy (i.e. their metabolism is activated) differently.

Savicell can diagnose lung cancer in a matter of hours, rather than the days or even weeks required for gene-sequenced liquid biopsies, says Davidovits.

That naturally raises comparisons with Theranos, the Silicon Valley blood-testing startup that raised over a billion dollars in what turned out to be the largest biomedical fraud in US history. Theranos also promised results from its in-pharmacy diagnostic machine in hours.

Davidovits dismisses any superficial similarities with Theranos. “They weren’t scientific,” he tells ISRAEL21c. “They never published.”

While Theranos eventually did publish a single paper in 2017 – some 14 years after the company was founded – the results from Savicell’s research with 200 patients in Israel appeared in the medical journal Cancer Immunology and Immunotherapy in 2018.

Giora Davidovits started Savicell with his brother Eyal in 2013. Giora received his BA in biochemistry from Brandeis and an MBA from Cornell. He has worked in the healthcare industry for 25 years, including management stints at Procter & Gamble and Johnson & Johnson.

Eyal, Savicell’s COO, worked for many years in finance and marketing positions for Intel and has a BS in manufacturing engineering and business studies.

The technology behind Savicell was initially developed by Tel Aviv University Prof. Fernando Patolsky, who doubles as the company’s principal investigator. When Savicell took on commercialization of Patolsky’s research, it was already at a clinical stage with a working proof of concept.

It is not yet commercially available; development and clinical studies are continuing. For a non-invasive diagnostic test, however, the time to market can be relatively short.

Savicell has raised $9 million and has R&D labs in Haifa, headed by Eyal, with a US office in Boston headed by Giora.

Among other players in the liquid biopsy space is an Israeli firm, Nucleix, which uses DNA sequencing to detect cancer cells. The company was founded in 2008 and has raised $11.4 million. Nucleix’s Lung EpiCheck can detect non-small cell lung carcinomas, the most common type of lung cancer, with 83% accuracy at stage 4 but only 59%at stage 1.

Savicell is focused today on lung cancer, but the same immunometabolism approach should work with other types of cancer, as well as autoimmune conditions. The company has already done preliminary research on developing a diagnostic kit to identify breast cancer via blood test.