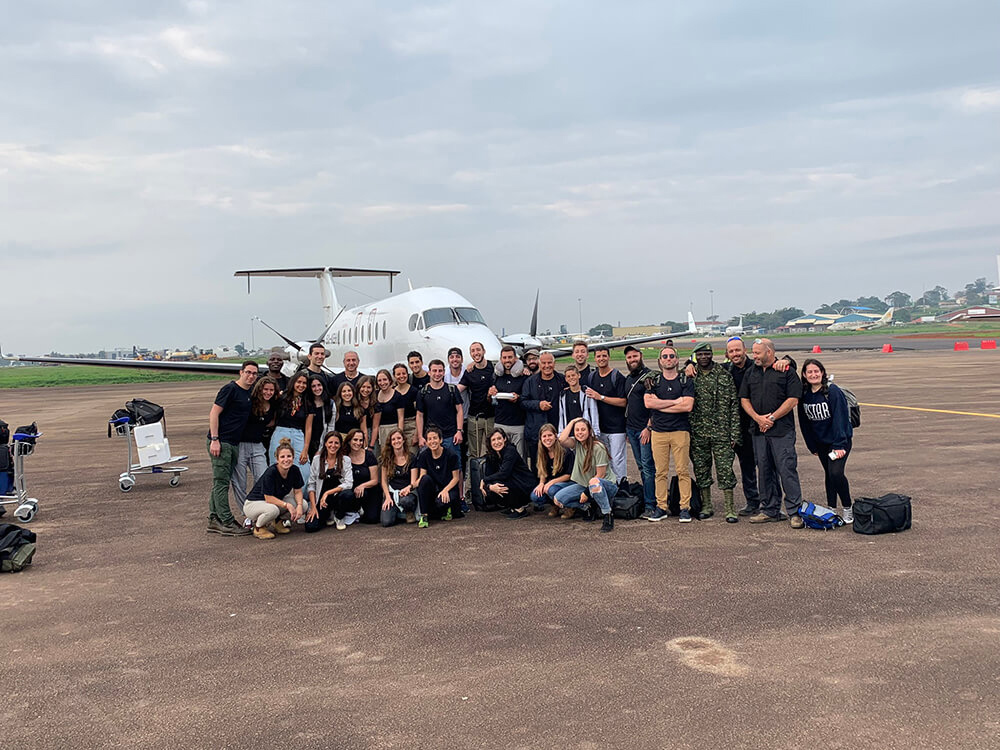 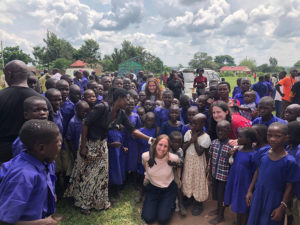 In June 2019, I had the distinct honor of partaking in a life changing trip. Facilitated and supervised by the incredibly dedicated board and staff at the Sephardic Community Center, a group of young adults partook in community-wide fundraiser to provide clean water for the village of Bumayi, Uganda. In conjunction with the Israeli charity, Innovation Africa, we worked to install a solar powered pump to extract water from aquifers beneath the Bumayi ground and enjoy the glory of clean water. 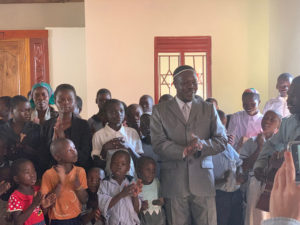 The Jewish community of Putti in their newly constructed synagogue by iAfrica. After praying Shaharit, we partook in the installation of the synagogue’s mezuzot.

While walking the first town, I had my first exposure to the bareness of sub-Saharan Africa. With each step my Reeboks protected feet from hit the ground. Next to me, bare, callous, and worn feet did the same. I stopped and looked at the bare feet around me as I stepped on stems and branches of all kinds. I considered the probable burning temperatures of the stone these bare feet were standing on. This alone made me realize something they probably never will, a thankfulness for shoes.

After seeing the contamination and dangerous water source of the first town, we saw the same at the second. The difference here being that we brought a solution. In direct opposite to the first town, we brought life-saving, thirst-quenching, and sanitary water to the second. We brought the divine miracle of an Israeli technology to this village, Bumayi. Bumayi made their thankfulness more than clear, shouting, cheering and sharing their wishes of “sangala.” 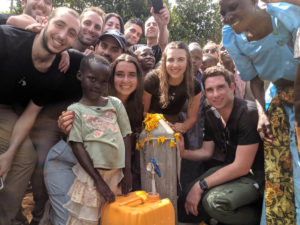 One of four communal faucets being opened, introducing the concept of plumbing and clean running water to the people of Bumayi for the first time.

Our first stop in Bumayi was what they once called their water source. We passed by a blissful woman carefully drying maze that she will soon be able to turn into bread with clean water. Following us were hundreds of children and toddlers. As soon as the children joined our group one of our guards gave me a few colored rubber bands to gift to the kids. After not thinking much about the colored bands, I gave one to a little boy. In return he gave me a smile that spoke volumes to me. “A colored rubber band,” I thought, “all it takes for that smile was a colored rubber band; now what would it take to get the same in most of the developed world?”

We reached the soon to be abandoned water source crawling and oozing with algae. Three women were elected to speak to the process of using this water source. One woman often faced an angry husband who, despite her returning with water, did not believe that she was getting water the entire time she was absent from the home. The third woman described how scorpions and snakes lurking in this water source would scare her off from bringing home water. She even went on to describe how children frequently lose their lives getting water from sources like these because the water is covering quicksand.

But the second woman’s testimony took my heart more than all else on this trip. On her back was her child, so used to seeing and being by this water source. After affirming of all else her villagers had to say about the struggle for clean water, she showed us hers. She swung her child around and showed us their back filled with boils, pimples, and rashes contracted by the child because of being washed with this contaminated water. She then fell to her knees. “A sign of maximal thanks,” according to our translator, then praised us for bringing Israeli technology of clean water to Bumayi. 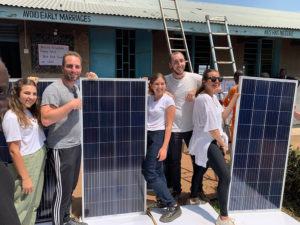 My head spun, my mind raced, my breath shortened. In front of us was this woman who was no more human than I, on her knees in grace of our presence. Sure, bringing a village in need of access to clean water the resources to do so is nice, but to the point of kneeling to us for doing so? I did not know what to think. Was she overestimating the gravity of what we brought? Was I underestimating the same? The truth was that I underestimated how our water project helped this mother. In this case, clean water helps her be a better mother, caring for her children better and in raising them healthier. I saw that allowing this mother to better her children’s conditions was invaluable; something unfathomable absent visiting Bumayi.

We celebrated and turned on the water pump. Again, singing and dancing, with sangala filling the air. Standing next to a little boy, I opened my mouth and drank the water being sprinkled all over, showing him it is safe to drink, an idea clearly foreign to him. For the first time he drank running water free of worrying from infection. 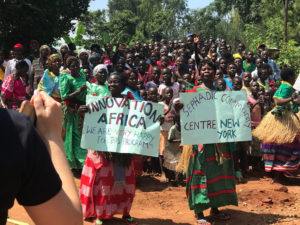 The welcoming wishes of sangala by the Bumayi villagers.

The giving continued through the following day when we visited Lwaboba Day School. After, again, being welcomed by cheers, dances and wishes of sangala, we saw what they called a classroom. The walls to this classroom were deteriorating, much like the books and paper they had. The ground they sat on while in their classes was not in much better condition. The classroom’s condition was so poor that when we brought desks for their classroom use, I did not know which way to face them. Conventionally, desks face the chalkboard. In this case, the chalkboard was so worn that I could not identify it as a separate segment of the classroom wall. I then turned the desks to face the “chalkboard.”

In addition to desks, we helped install solar panels to provide the school with power. In some ways this installation touched me more than the opening of the Bumayi water supply did. Tens of hundreds of teachers, students and administrators for as far as the eye can see over the baron Ugandan land were congregating around a light bulb. The light bulb was to be powered by the panels we just installed. We shouted, “Three! Two! One!” The bulb lit up, celebrations broke out, and nothing but smiles took people’s faces. The light illuminated more than the classrooms but the spirits of all involved in this school’s activities. The thought of having class that is not by candlelight is now a reality. I thought to myself, tens of hundreds of people are dancing over the illumination of a light bulb, Edison was probably the only one with a near equivalent reaction. 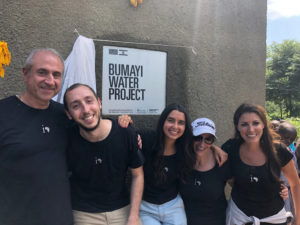 Leading up to my trip, and even following it, people often asked me, why Uganda? Joey Tawil, the Center’s CEO, concisely highlighted why when addressing our group on the trip: “Charity begins at home, but it doesn’t end there.” But for me personally, one of many reasons included the following. In my May 2014 graduation address to the Yeshivah of Flatbush community, I wished for my fellow graduates to go out there “and not just to change the world, but to change your world.” A unique opportunity came along to change my world and to מת(ק)(כ)ן עולם as the Aleinu prayer teaches us. I seized the opportunity and surely did my best in bringing the glory of God’s blessing of Israeli innovation to the impoverished lives of Uganda. Not only is there no price too high for changing our world but in making a Kiddush Hashem.

Charles Chakkalo was born to Syrian-Jewish refugees and is an active member of the Brooklyn, NY community. He currently works in e-commerce as a Founding Partner of Chakkalo & Associates. In 2017 he graduated from Hunter College (B.A.) as Class Salutatorian with majors in Philosophy & Special Honors and minors in Middle East Studies, Legal Studies, and Political Science.