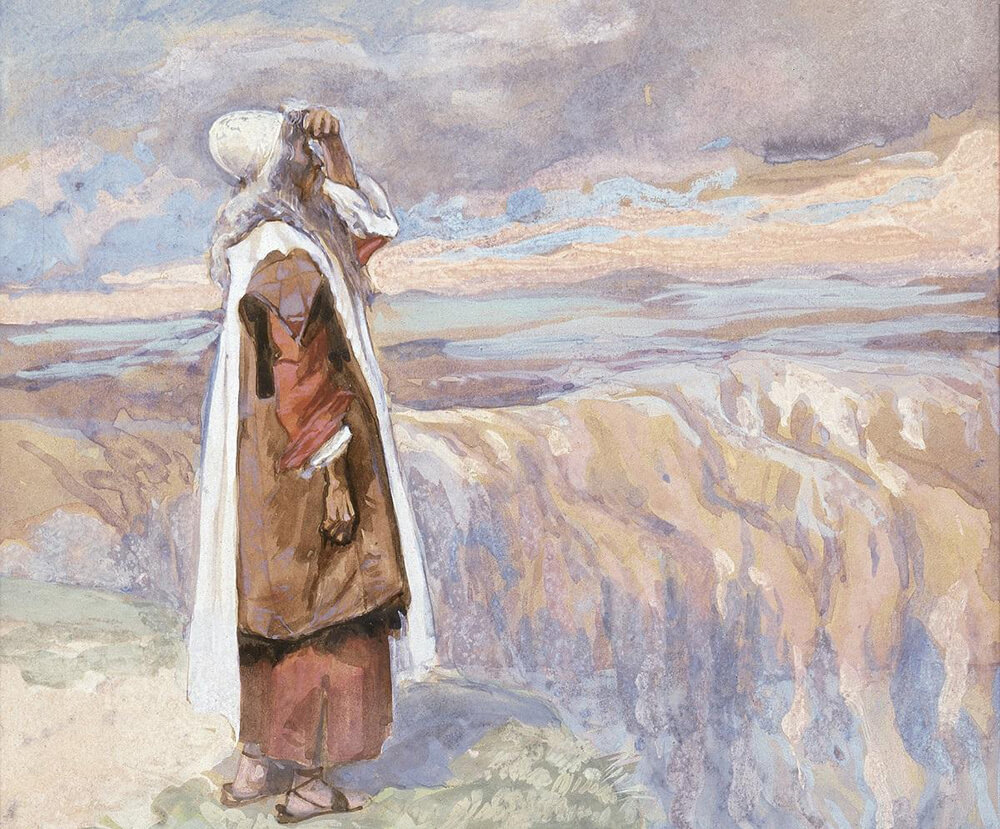 An artist’s rendition of Moses, days before his demise, praying urgently and repeatedly that the Almighty grant him permission to enter the Promised Land. Photo Credit: TheTorah.com

I was very fortunate as a young boy, and in one particular way I knew it. Very few of my friends had living grandparents. Their families had recently arrived in America, and their grandparents remained behind in Eastern Europe and were consumed in the fires of the Holocaust.

However, I did not immediately realize then just how fortunate I was. That, I discovered much later, when I reached early adolescence. It wasn’t until then that I became informed about the Holocaust. It slowly dawned upon me that I was born just months after Hitler invaded Poland.

The image that continues to haunt me today first emerged then into my mind’s eye. It is the image of many cousins being buried alive, their tiny bellies punctured by storm troopers’ bayonets, their bodies incinerated, reduced to ash.

It was only then that I came to understand how fortunate I was to have been born in Brooklyn, NY, and not in Kolomay, Poland.

My great-grandmother was the impetus for my life-long preoccupation with the Holocaust, its history, and its horrors. Somehow, although others claimed that they were then unaware of what was transpiring in distant Europe, she knew what was happening to her family there. Not only did she know, but she responded.

“Responded?” you ask incredulously. Of what sort of response was she capable? She was ninety years old, frail, of meager means, and spoke no English to boot.

Her response was prayer; prayer and fasting. She fasted every Monday and Thursday from dawn to dusk, and spent those days entirely in prayer, tearfully but silently reciting Psalms. If my childhood memories serve me correctly, she recited the entire Book of Psalms each day that she fasted.

I do not know, and to this day have had no way of ever knowing, when she began this pious spiritual practice, but I know for certain when she concluded it. I know this for certain, for I was with her on that summer day in 1950 when she passed away.

The image of my great-grandmother has, by now, mostly faded from my memory. But every year, as this coming Shabbat approaches, that image is revived. For one thing, it is close to the date of her passing on the 22nd of Tammuz.

But what brings it back to me even more forcefully is another image, this one from this week’s Torah portion, Parashat Va’etchanan (Deuteronomy 3:23-7:11). It is the image of Moses, days before his demise, praying urgently and repeatedly that the Almighty grant him permission to enter the Promised Land.

There are many differences between Yitta Leah’s prayers and those of Moses. She was praying for the lives, and eventually for the souls, of others, six million others. He, on the other hand, was praying for himself.

Sadly, the prayers of neither were answered. Except for those who were already in America, great-grandmother’s extended family had but one survivor, and Moses never set foot into the Promised Land.

It is partly for this reason that this week’s parasha calls to mind the theme of unanswered prayers.

But there is another reason. This Shabbat inevitably follows the somber day of Tisha B’Av, a day whose very essence is the theme of unanswered prayers: “You have screened Yourself off with a cloud, so that no prayer may pass through” (Lamentations 3:44). This verse expresses the feeling of every faithful Jew as he or she struggles to cope on Tisha B’Av with the recollection of the multitudes of unanswered prayers that characterized the long list of the catastrophes of Jewish history.

It is thus so very apt that our tradition designates this Shabbat as the Sabbath of Consolation, Shabbat Nachamu. There can be no greater consolation than the hope for “answered prayers” and the promise that they will be answered.

It was only as a little boy that I knew my great-grandmother. But even then, I knew her well enough to understand that in her current heavenly abode, she finds her prayers answered. For one thing, we believe that the Almighty’s mysteries are revealed to the righteous in the Afterlife. Moreover, she has undoubtedly found consolation in the knowledge that so many of her descendants are faithful to her life’s example and now tell her story to their own great-grandchildren.

And Moses too has found consolation in the knowledge that his People are returning to the land for which he yearned. Joel Cohen, in his beautiful book Moses: A Memoir, poignantly describes Moses’ last moments and imagines him saying these words:

“For better than allowing me to walk with my people in the Promised Land, He has indulged me to see the beauty and magnificence of His continuum and how, despite all, He has loved them so… “

Both our parasha itself and its haftarah, the reading from the Book of Isaiah which accompanies it, encourage such hope and herald such promise:

“For what great nation is there that has a god so close at hand as is the Lord our God whenever we call upon Him?” (Deuteronomy 4:7)

And declare to her

That her term of service is over,

That her iniquity is expiated…”