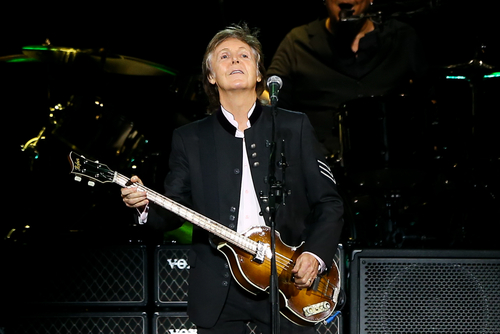 Paul McCartney ended his tour with a very special guest— bringing on Ringo Starr for a rare performance by the only two surviving members of The Beatles.

The last time two Beatles shared the stage at Dodger Stadium in LA was August 28, 1966.  This was the Beatles’ second to last live concert ever, the night before the legendary band’s final show at Candlestick Park in San Francisco., Esquire magazine reported.

Ringo walked on stage to the sold-out crowd where McCartney kissed him on the head and said “I love you, man,” before Starr took his place behind the drums. From there, the two played “Sgt. Pepper’s Lonely-Hearts Club Band (Reprise)” and “Helter Skelter” from The White Album

Critics in general praised McCartney’s latest tour which just concluded. Variety Magazine writer Chris Willman said of the concert:  “ it pleases the court to find that McCartney remains a show-stopping entertainer of the highest order without any “well, for a man of his years…” qualifications. At Dodger Stadium, when it came to his performance level, the crowd was in the ‘70s, not his 70s. You could seek out signs of the vocal thinning that is inevitable at a certain point and find it, in isolated spots. But he also sounded better than he did at Desert Trip three years ago. And even if you had that radar on for how he might be protecting his voice at the end of a tour, there was very little sign that McCartney was half-assing anything, as a singer who likes to get on stage and howl. There were growling asides and upper-register coos that he could have left out without anyone complaining… and instead he just seemed to add more”

“Ladies and gentlemen, the one and only …” McCartney said at the end of their brief reunion, telling Starr, “Hey baby, thank you.” “No, thank you, Paul. It’s been a thrill for me and I’ve had a lovely night. It’s a great show and I love you, man,” Starr replied. After throwing his drumsticks into the crowd, Starr walked off flashing peace signs, with McCartney telling him, “I love you — peace and love, Ringo, forever.

The other surprise guest was Eagles guitarist Joe Walsh, who is also Starr’s brother-in-law, for The Beatles’ “The End.”, Page 6 recapped.

““Farewell to you guys. Farewell to America. Only one thing left to be said: we’ll see you next time,” McCartney said at the end of the show, alluding to the fact he is not retiring yet.