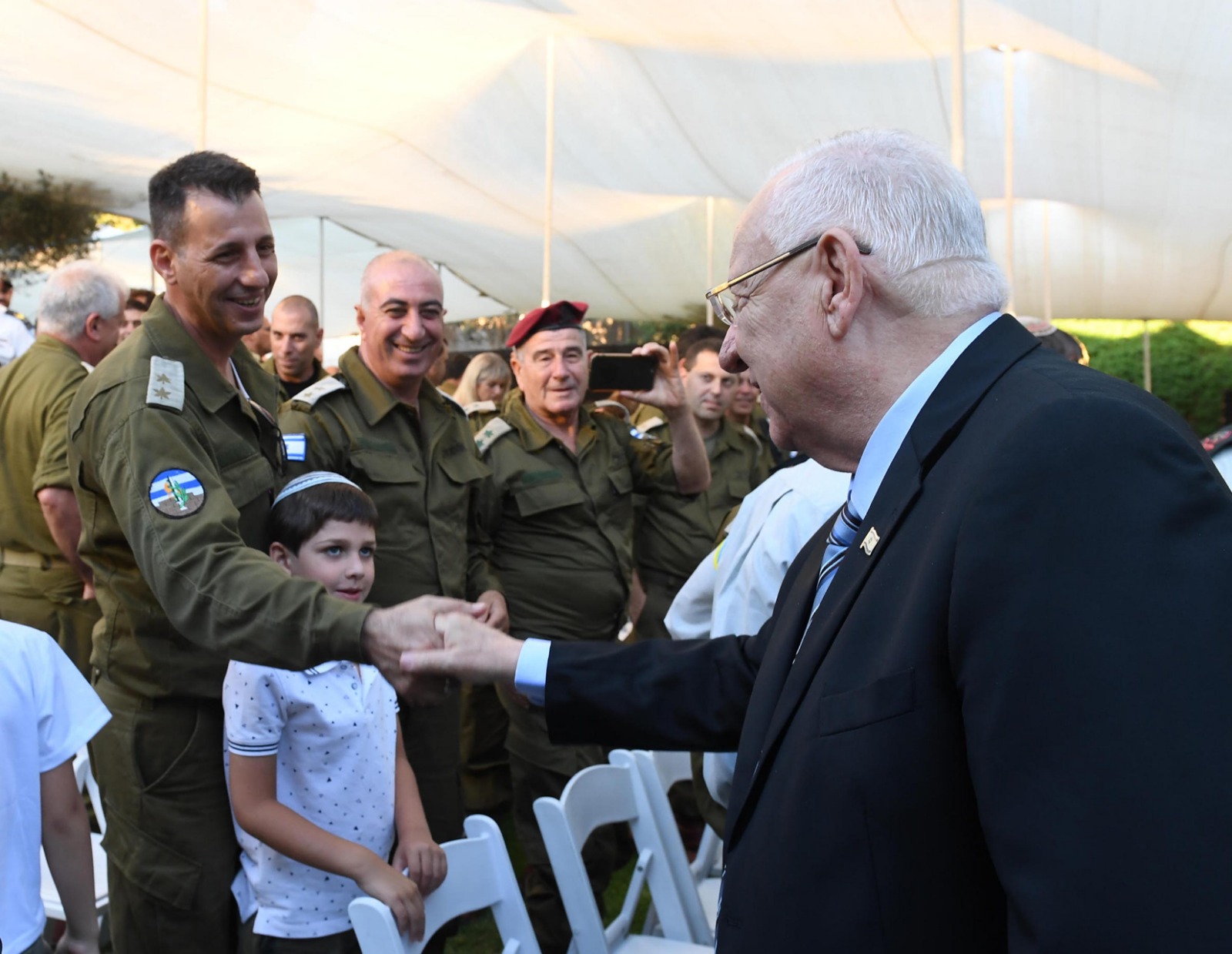 The president welcomed Mr Greenblatt warmly and the two discussed recent developments in the efforts to restart Israeli-Palestinian negotiations and the search for a peace agreement. The president noted the unique and important role played by the United States, Israel’s ally, in the search for peace and reconciliation in our region, and said that the State of Israel welcomed their efforts towards a better future. 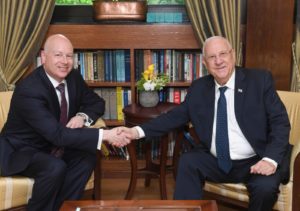 President Rivlin said: “Reserve service is a duty that is also a great privilege. You reservists, and all those who serve in the reserves, are a model for Israeli society as a whole. You are our pride, the pride of the State of Israel! Therefore, it is our duty to ensure that you are given the best conditions to do your job properly, and to encourage employers and academic institutions to give preference to reservists.”

Beit HaNasi was painted olive green this evening as 16 outstanding IDF reserve units arrived to be recognized and appreciated for their devoted and determined activities in the air, on the sea and on land. “I am proud to celebrate with you today for being chosen as the IDF’s outstanding reserve units. You, the men and women of the outstanding units are outstanding Israelis,” said President Reuven (Ruvi) Rivlin to reservists from all over the country and from all parts of society. “Thanks to you, the citizens of Israel and the security establishment as a whole can be calm and confident in our ability to triumph in battle whenever required,” he said. “Today, we have the opportunity to thank you for your many days of reserve duty and long service. Good job!” The President awarded the 16 certificates of excellence to the outstanding reserve units for the year 5779. Prime Minister and Minister of Defense Benjamin Netanyahu, IDF Chief of Staff Lt Gen Aviv Kochavi and representative of the commanders of the chosen units, Lt Col Harel Namir, commander of Battalion 9215 of the “Iron Fist” Brigade also spoke at the event.

“It is true that other countries also have reserve forces, but the Israeli reserve model is unique in its speed, its size and of course the nature of the missions and its professionalism.” The president added: “Our reserves are an essential part of the IDF’s order of battle and as such you are required to demonstrate the highest professional, human and volunteer skills. And so, for us you are much more than ‘reserves’. You are the foundation of power on which the security of the state is based.”

“The reserves also play an important role in the conception of the IDF as a people’s army,” continued the president. “Unfortunately, in recent years, fewer people carry the burden for the common good,” he said. “Still, among reservists, the motivation to serve and volunteer only increases. As a retired reservist, I served in the reserves for over 20 years, until I was elected to the Knesset. And a proud father of men who serve in the reserves, I want to tell you that reserve service is a duty that is also a great privilege. You reservists, and all those who serve in the reserves, are a model for Israeli society as a whole. You are our pride, the pride of the State of Israel! Therefore, it is our duty to ensure that you are given the best conditions to do your job properly, and to encourage employers and academic institutions to give preference to reservists.” At the end of his remarks, the president especially thanked the families who allow the reservists to do their duty.

Lt Col Harel Namir, commander of Battalion 9215: “”The IDF reserves are like a rare hothouse for the best of Israel, and everyone in it is part of an amazing human fabric that works in harmony, shoulder to shoulder, without any difference of religion, race or gender. Unity, not tribalism. Giving, and not just taking. As we all know, every reservist who reports for duty does not do so alone. Everyone brings, as it were, his own family and his various constraint. Here, too, reality has become more complex, but happily, in most cases, workplaces and families make it happen. I would like to thank the ongoing support that comes from home. Anyone who is here must surely have a significant “support group” behind them, and this deserves a great deal of appreciation and a round of applause.”