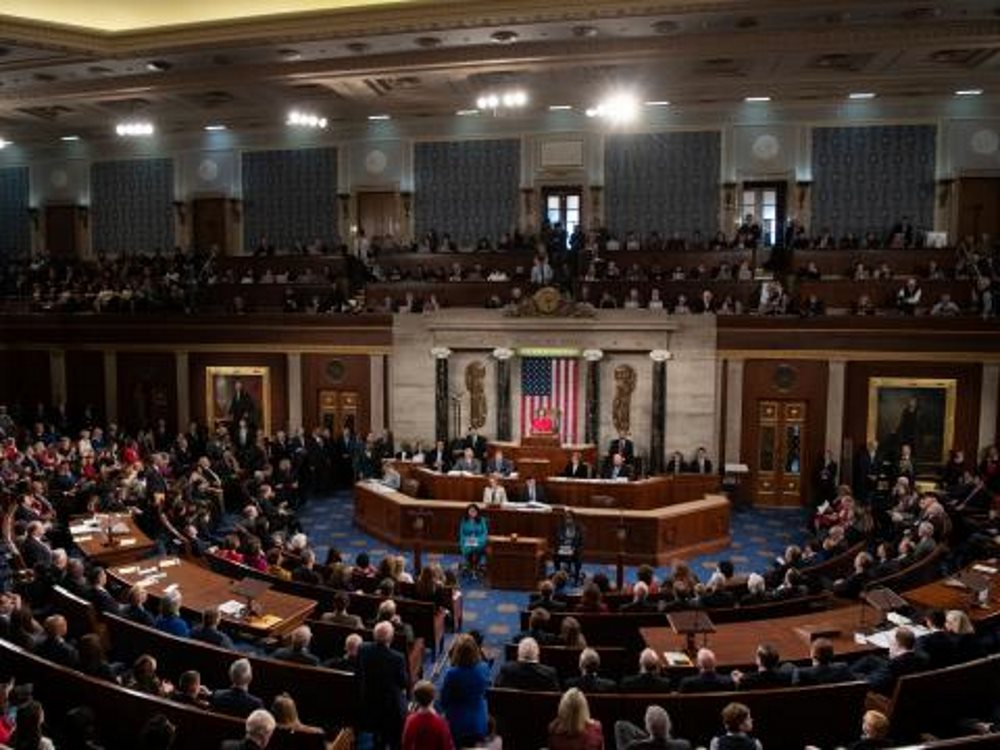 Despite opposition from fringe lawmakers, bills get bipartisan support

The House of Representatives overwhelmingly passed several pro-Israel bills, including one opposing boycotts of the Jewish state, dealing a blow to far-left lawmakers such as Reps. Ilhan Omar (Minn.) and Rashida Tlaib (Mich.), who voted against the legislation.

In a vote of 398 to 17, lawmakers approved a bill spearheaded by Rep. Brad Schneider (D., Ill.) opposing the global Boycott, Divestment, and Sanctions movement (BDS), an anti-Israel effort that wages economic warfare on the Jewish state.

Among the 17 who voted against the bill are Tlaib, Omar, and progressive ally Rep. Alexandria Ocasio-Cortez (D., N.Y.). Five members including frequent Trump administration critic Rep. Justin Amash (I., Mich.) voted “present” on the measure, while 12 members, including Greg Gianforte (R., Mont.), skipped the vote.

Two other bills meant to strengthen Israel’s military alliance with the United States and provide justice to victims of Palestinian terrorism also sailed through the House on Monday evening with overwhelming bipartisan support.

The consecutive votes are a sign that despite vocal anti-Israel outcry and anti-Semitic sentiment from fringe lawmakers such as Omar and Tlaib, the majority of Congress continues to back the U.S.-Israel alliance and America’s military commitment to the Jewish state.

“The Global BDS Movement denies the Jewish people’s connection to the land of Israel, refuses to accept the basic idea of a Jewish state, and seeks to delegitimize Israel in international forums, on college campuses, and in global commerce,” Schneider said in a statement after the vote on his anti-BDS bill.

“Our resolution does not infringe on any American’s right to protest, and it explicitly recognizes that boycotts have a long and important history in our country, including during the Civil Rights movement and efforts to end apartheid in South Africa,” Schneider said. “However, not all boycotts seek just ends. Our objection is to the fundamental aim of the Global BDS Movement: the delegitimization of Israel and the destruction of the Jewish state.”

In a second show of bipartisan support for Israel, House lawmakers went on to pass legislation aimed at bolstering cooperation between the United States and Israel on a host of regional security and economic matters. Dubbed the United States-Israel Cooperation Enhancement and Regional Security Act, the bill also paves a way for victims of Palestinian terrorism to receive justice.

“Today we sent a clear message that bipartisan support for the U.S.–Israel relationship, for the security and civilian cooperation between our countries, and for the ties between the American and Israeli people remains strong and unwavering,” Deutch said in a statement. “This bill will expand relations with one of our closest allies, a relationship that is broad and deep, that highlights the positive impact the United States and Israel can have in so many critical areas when we work together.”

A third bill that would impose sanctions on foreign entities that support Palestinian terrorism also sailed to approval.

The legislation, forwarded by Rep. Brian Mast (R., Fla.), a U.S. veteran who also served in the Israeli Defense Forces, would impose economic penalties on any foreign government that supports Palestinian terrorism.

“Radical Islamic terrorists, like Hamas and the Palestinian Islamic Jihad, have made it clear that they will stop at nothing to reign terror on innocent people around the world,” Mast was quoted as saying about the bill. “Hamas is single-handedly responsible for the deaths of numerous Americans and Israelis. These sanctions send a strong message to anybody who supports these radicals preaching the destruction of Israel and death to everything we hold dear in the United States.” (Washington Free Beacon)