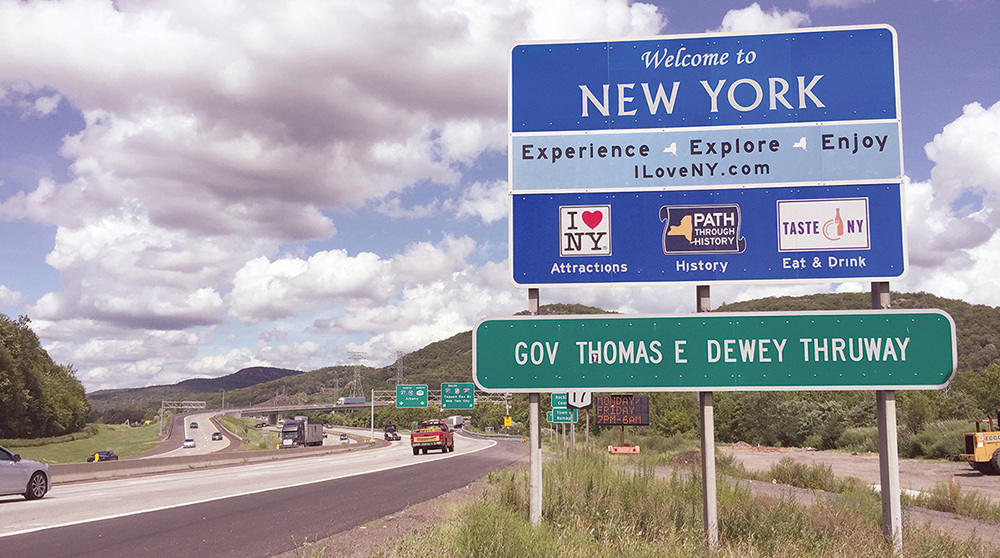 A "Welcome to New York" sign along northbound Interstate 287 and State Route 17. (Famartin/Wikicommons)

Inadequate planning cost taxpayers over $12 million in overruns at I LOVE NY highway rest areas, as per an audit from the office of Comptroller Thomas DiNapoli. The recently released audit revealed that the state Department of Transportation did a poor job of planning and following up in its construction of rest areas with a tourism focus in each of NYS’s 10 regions. The state’s plan, as touted by Governor Andrew Cuomo, was to build at least 10 Welcome Centers, carrying New York-made products, as a way to advertise the state’s tourism attractions in each of its regions.

As reported by Democrat & Chronicle, USA TODAY Network’s Albany section, the audit showed that the Welcome Centers fell upon substantial cost overruns. In one example, the audit asserts that when building the Welcome Center on the Long Island Expressway, the DOT didn’t initially account for a sewer system. The oversight caused the building’s cost to jump unexpectedly from $20 million to $27 million.

Moreover, the audit found that in the town of Schodack, east of Albany, the DOT spent $1.4 million knocking down an existing rest area on Interstate 90, only to later decide that the site wasn’t big enough, moving the plans to Interstate 87. In another fail, in the Hudson Valley, DOT spent $1.5 million on plans for a rest area on the Taconic State Parkway only to forsake the plans altogether amid environmental concerns. In Kirkwood, Broome County, final plans for a Welcome Center were 30 percent complete when the DOT put the project out for a bid. When the Welcome Center eventually opened in October 2017, the actual cost had risen to $8.3 million, up from an estimate of $6.4 million.

The DOT attempted to defend itself in a written response to the auditors. The letter called the audit’s findings “baseless and inaccurate”, and censured the Comptroller’s office for not recognizing the tourism benefits of the Welcome Centers. DOT maintained that some of the overrun stemmed from its quest to complete the buildings in time for peak traveling seasons. The agency also wrote that some of the extra costs provided additional amenities to tourists and travelers.

In the midst of the DOT’s response, it mentioned that one of the comptroller’s Office employees had been arrested while the audit was ongoing for “inappropriate and harassing behavior” of a worker at DOT headquarters. Indeed, Joseph Robilotto, 53, who was overseeing the audit, was arrested for placing a GPS tracking device on a woman’s car while the audit was taking place. He was charged with the misdemeanor, stalking, after the the DOT employee found the device. The tracker had been on her car for five months, as per the Police.

The DOT questioned why Robilotto was not listed as an author of the audit. “NYSDOT is concerned that many of the findings and recommendations included in this audit were unduly impacted by the Examiner in Charge’s actions during the audit, and his apparent lack of participation in the final audit drafting,” DOT Assistant Commissioner Raymond LaMarco wrote in his response.

In response DiNapoli’s office said that DOT officials are just using Robilotto’s case to belittle the audit. The Comptroller’s Office accused the DOT of “exaggerating” Robilotto’s role to discredit the findings.