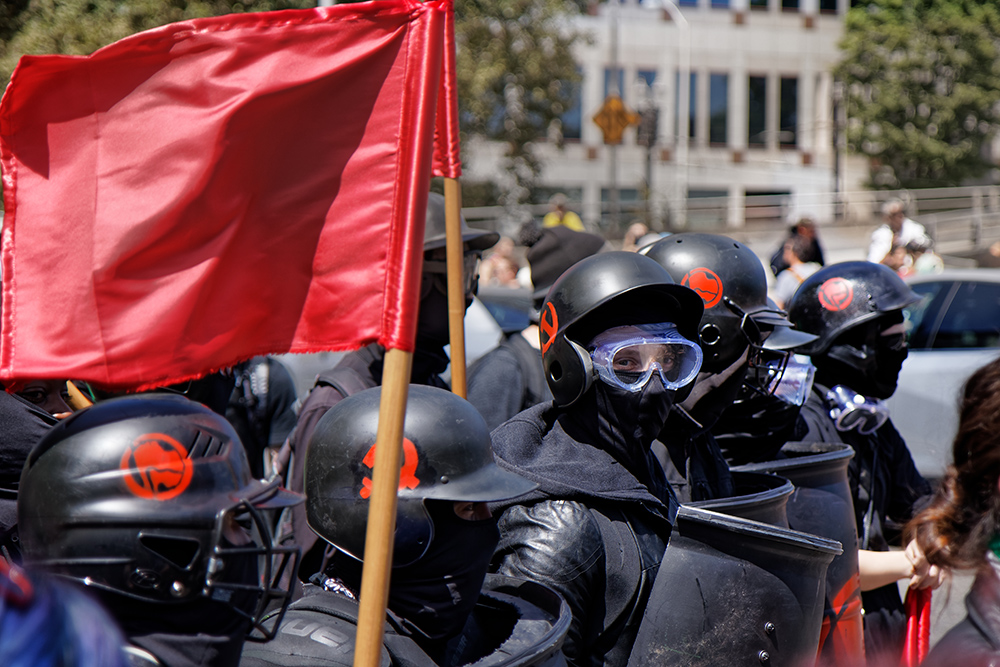 The violent, left wing Antifa movement have aligned themselves with such radical organizations such as Black Lives Matter and the Occupy. They are all of a single mind, to destroy America. Photo Credit: Shutterstock

We sadly see the seemingly irreparable division between Democrats and Republicans in Congress, in the media and even in our homes. There is very little they agree on, be it their ideology, goals or their methods to win over voters. However, we’ve assumed, foolishly perhaps, over the years that both sides would at least bend over backwards to protect the Constitution’s rights and privileges over which we’ve fought many wars to maintain. But now in the light of recent events and their aftermaths, we’ve come to the conclusion that the violence, the deprivation of our rights to free speech and to assemble peacefully is not only being ignored by the Leftist Democrats but is being encouraged by their silence. We’re talking about the actions of Antifa and their aligned radical organizations such as Black Lives Matter and the Occupy. They are all of a single mind, to destroy America.

President Trump has chimed in to endorse a Senate measure that would label this Left Wing movement, Antifa, MS-13 and others, as domestic terrorists. The resolution is being sponsored by Ted Cruz (R-TX) who stated: “Antifa is a group of hateful, intolerant radicals who pursue their unhinged agenda through aggressive violence,” when he introduced the resolution. He’s right. Antifa is composed of black-masked hooligans who smash bike locks, from chains into the heads of conservatives who assemble for demonstrations or at meetings. They use bear pepper spray or toss other caustic liquids into any crowd that opposes their Socialistic, anarchistic message. If they don’t like what you say or stand for, they’ll attempt to cripple you. And they recently did that to Quillete editor, Andy Ngo, while they protested in Portland, Oregon. No one is safe from them. Mr. Ngo is the gay son of a Vietnamese immigrant, which isn’t really what comes to mind when one thinks of the “fascists” Antifa says it is fighting against.

But CNN”s Don Lemon is a supporter of the group. He claims they are “fighting” racists and fascists, noting it’s right in their name. When addressed of the group’s history of violence, he said with a straight face, “No organization is perfect.” Enough said for this shameful CNN biggee. Compare Lemon’s idiotic comments to that of a realist, former NYC Police Commissioner, Bernard Kerik. In response to the attack on Ngo, Kerik stated: “This is an extremely violent group that goes out, threatens, intimidates, attacks with extreme violence for political reasons.”

But who supports this group? Where does it get its $$$. According to Intellihub, billionaire George Soros is the most likely culprit. Back in April, a California faction of Antifa demanded that they be paid the money which they were promised. They tweeted: “Antifa demands George Soros pay us the money he owes. Unite comrades and fight for $15/hour. #Resist.” Who knows? But we stand with President Trump to demand this group and all like it be labeled, “domestic terrorists.”