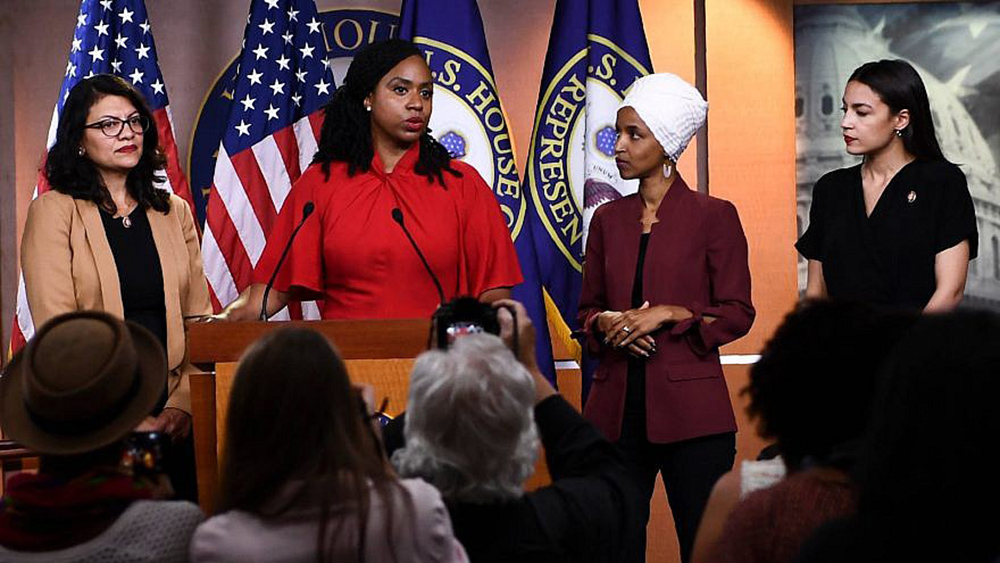 Reps. Ilhan Omar and Rashida Tlaib were dealt a setback. But their continuing popularity and the failure to pass a bill that would ban BDS discrimination shows that the fight is far from over

For one day at least, the Democratic Party’s leadership made it clear that the adults are still in charge. Representatives Ilhan Omar (D-Minn.) and Rashida Tlaib (D-Mich.), with support from civil-rights icon Rep. John Lewis (D-Ga.) announced last week their decision to push for a resolution supporting the BDS movement. But rather than sit back and let the pair further embarrass their party by identifying it with an anti-Semitic movement, as well as distracting from the Democrats’ effort to focus on President Donald Trump’s insults directed at the far-left “Squad,” House Speaker Nancy Pelosi and her team decided to push forward another competing resolution condemning BDS.

The result was that after months of letting a handful of radical leftists become the face of the party, Democrats demonstrated that the overwhelming majority of their caucus wanted to distance themselves from anti-Israel politics. The anti-BDS resolution passed overwhelmingly by a 398-17 majority in a stinging rebuke for Omar, Tlaib and their buddy, Rep. Alexandria Ocasio-Cortez (D-N.Y.), who was also among the few “no” votes on the measure.

But the congressional battle over BDS is far from over. As long as many Democrats are still prepared to treat the movement’s most prominent champions as worthy of praise rather than being shunned—as they should be—as backers of a hate movement, concerns about the growth of anti-Semitism on the political left are still very much in order.

The House had an opportunity to deal decisively with this issue earlier this year when both Omar and Tlaib made anti-Semitic statements in which they accused American Jews of dual loyalty to Israel and stated that supporters of the Jewish state had bought Congress. Combined with their backing of a BDS movement that is indistinguishable from anti-Semitism, that should have been enough to motivate Pelosi and the rest of the Democratic leadership to strip the pair of their committee assignments and to pass a resolution rebuking them by name.

But with the very vocal AOC and others on the left springing to their defense, Pelosi and the rest of the Democrats were cowed into backing down. A resolution originally intended to call out Omar for anti-Semitism was watered down to condemning all sorts of hatred. The Democrats passed on punishing Omar and Tlaib in the same manner that the Republicans had employed against Rep. Steve King (R-Iowa) for his history of statements excusing white supremacists.

Rather than being isolated, Omar and Tlaib became the darlings of the mainstream media, as well as fodder for late-night comedy shows, where they were given laudatory coverage and fawning interviews.

Their undeserved status as popular heroines was only enhanced when earlier this month, Trump denounced the two congresswomen and suggested that they “go back where they came from,” along slamming AOC and the fourth member of “the Squad,” Rep. Ayanna Pressley (D-Mass.).

As was the case with their dissenting votes about providing funding for the crisis at the nation’s southern border, the anti-BDS resolution should demonstrate that Omar, Tlaib and AOC are marginal figures who are unworthy of the attention that the media and their political foes have lavished on them since their election win last November.

But the bad news for those who worry about the way support for BDS and its anti-Semitic goal of eliminating the one Jewish state on the planet has grown on the left is that it’s not quite as simple as that.

The House could have taken up a separate bill on BDS that had already been passed by the Republican-controlled Senate, but chose instead to ignore it. That legislation, like the laws already passed by 27 states, authorizes state and local governments to refuse to do business with entities that engage in discriminatory commercial conduct aimed at Israel and its supporters. The Senate measure had strong bipartisan support and passed by a vote of 77-23. A majority of Senate Democrats—27 out of 49—backed tough action against BDS with 22 joining the one lone Republican “no” vote by Sen. Rand Paul of Kentucky.

Had Pelosi chosen to let the House vote on the Senate anti-BDS bill, it’s likely that it, too, would have passed overwhelmingly. But loathe to stand up to liberals who have bought into the false arguments about the Senate bill violating free-speech rights of BDS supporters, the only measure that she allowed to come to a vote was a resolution without any penalties for those who engage in the kind of discriminatory actions that should be judged as being just as illegal as bias rooted in race, gender or sexual orientation.

But half a loaf in the form of the anti-BDS resolution that did pass is better than none at all. That the majority of congressional Democrats are now on record against BDS demonstrates that most Americans—no matter which side of the political aisle they are on—still support Israel.

As long as AOC, Omar, Tlaib and others making egregious comparisons of Israel to Nazi Germany are still being treated as the “future of the Democratic Party”—in the words of Democratic National Committee Chair Tom Perez—and benefiting from being the objects of Trump’s Twitter abuse, the BDS movement they support won’t be confined to the fever swamps of American politics.

The support of Lewis and other members of the Congressional Black Caucus for Omar’s pro-BDS resolution remains a troubling indication of the cracks within the Democratic Party. This issue will almost certainly resurface at next year’s Democratic National Convention when the party’s platform will be debated. The refusal of all of the Democratic senators running for president to join the bipartisan consensus against a tough anti-BDS bill is another indication that the anti-Israel left has more clout than the House vote indicated.

While the House vote shows that contrary to the predictions of Israel’s critics, backing for the Jewish nations is still bipartisan, the far-left’s tolerance for anti-Semitism will keep this issue alive. One battle won doesn’t end what is likely to be a long struggle against hate.

Jonathan S. Tobin is editor in chief of JNS—Jewish News Syndicate. Follow him on Twitter at: @jonathans_tobin.

It’s Not About Race – The Exploitation of Another Black Victim

Is the EU Having Second Thoughts Over its Hostility Towards the Jewish State?