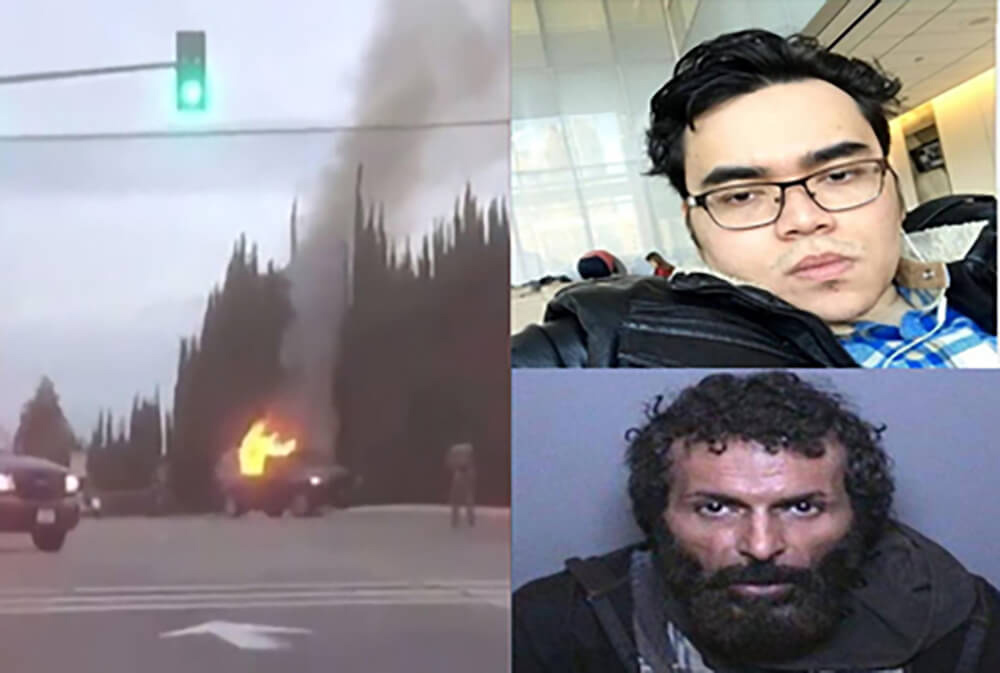 If, one year after 9/11, an individual originally from India drove a van full of propane tanks into the front gate of a California Air Force base, burning himself to death in the process, it would have been deemed an act of terrorism. In fact, it would have received extensive media coverage and quickly reverted society back to being concerned about another attack. Additional consequences would have included an enraged society, a collective call by citizens to find a motive, and an easing of political correctness.

If, one year after 9/11, a Muslim male was stopped in Los Angeles with two homemade bombs in his car while heading to a crowded mall with the intent of carrying out an attack, the plot would have gained national attention. And if deeper searches revealed that the suspect had a previous conviction for making terroristic threats, inquiries would have begun for the missing links. If, finally, it was determined that this same man had another, more recent conviction overseas for attacking someone with acid and disfiguring him for life, Congress may have stood up and taken notice.

Finally, if one year after 9/11, a Bangladeshi man meticulously plotted to carry out a jihadist attack in Times Square, more than just New Yorkers would be alarmed. If he lauded Osama bin Laden and characterized the attacks of 9/11 as a success, American citizens across the country would take notice.

Although the dates have been changed, these stories are true. In fact, each happened within the last two years inside America’s borders with little to no national media coverage. Motives have still not been “determined,” which begs the question whether authorities are keeping information close to the chest or whether there’s a lack relevant training to help them understand the ideology and motivations of this enemy.

What happened? Why is there such a lack of interest in, or denial of, jihadist attacks and plots in America today? Does it have to do with the drowning out of information by the daily news cycle? Or maybe these are just lower priority stories given the tectonic events happening around the country each day. Law enforcement has been tremendously effective in thwarting attacks over the years. Perhaps those successes generated a sense of perpetual protection.

In reality, there are three other options that might explain this lackluster interest in such attacks and plots.

First, people have little awareness about, or have become numb to jihadist terrorism. Despite thousands of attacks globally each year, Americans receive little exposure to the daily attacks in India, Somalia, and other countries. Events taking place in far-off and austere locations around the world rarely make their way into American media. Beyond this fact, jihadism has all but become a way of life given its frequency, especially in countries such as Iraq and Afghanistan. Outside the shock and awe of ISIS beheadings and Boko Haram school kidnappings, Americans have become numb to the weekly IED and car bomb attacks.

Second, American citizens are afraid to acknowledge and publicly connect anything evil that may have a potential link to religion as its root. Scratching the surface in the above attacks or plots would most likely connect these incidents to Islamism. In fact, one just needs to read the criminal complaint from the last week’s Times Square plot to learn that the suspect listened to sermons by American-born al-Qaida cleric Anwar al-Awlaki in his run up to planning the attack. He said he would be “happy” “seeing the flag of Islam on the Twin Towers or the Empire State Building.”

While those are his exact words, calling attention to them is likely to trigger immediate accusations of Islamophobia. This is an all-too-common reaction from certain Muslim advocacy groups subsequent to jihadist attacks or uncovered plots within America. Others will claim the suspect is mentally ill, lacks knowledge of Islam, and the other go-to excuse – he was manipulated and radicalized by the Internet.

Finally, a third possible reason for the lack of interest in or denial that jihad is present in the United States may have to do with our lack of understanding about the ideology that fuels many plots. Cyber-attacks are a simple concept – someone hacked a company’s computer and stole data. A slick businessman swindled a slew of elderly citizens out of their retirement savings: evil, but straightforward. Even school shootings are pieced together after the event, the suspect was bullied and committed to bringing vengeance to those that wronged him.

But the jihadist ideology continues to be a mystery. A young man, often college educated and raised in a stable family, decides to martyr himself in the cause of a religion. In fact, he’s so dedicated to his effort he is ready to kill scores of other people he has never met as part of his martyrdom. Why? He begins spending every waking moment of his day watching videos of jihadists killing coalition troops in Iraq, reading manuscripts like the “Management of Savagery,” written by an al-Qaida scholar, and communicating with like-minded believers in Yemen through encrypted communications. Maybe he’s an engineer by trade and has a well-paying job and a hopeful future. We can’t make heads or tails of it.

In the end, we’re left with two things. Jihad continues to be a threat in the United States, and there is a lack of interest and focus on the consequences of its presence. Jihadists revel in the lack of scrutiny. They will continue to plan, conduct surveillance, and build their network unless a citizen calls the authorities with a hunch about something seeming suspicious. Yet, will that call happen? It did not in San Bernardino, and 14 people were gunned down.

America is being lured into a false sense of security by the media, given the lack of coverage and what some could characterize as a minimization campaign. Jihad is real, and radicalization is happening every day in America, we just need to read our history.

Brig Barker is a retired FBI counterterrorism agent and former Army officer. He is now the CEO of Red Rock Global Security Group.