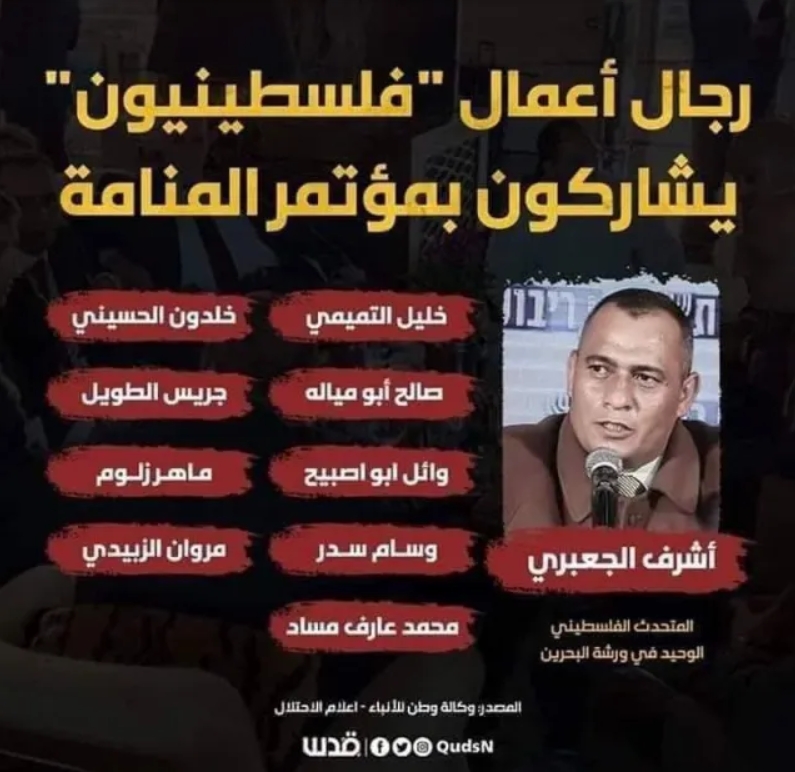 Hebron – Death threats and arrests of Palestinian businessmen who attended the Peace to Prosperity conference in Bahrain.

The Palestinian Authority and other terrorist groups are hunting private Palestinian business people who accepted invitation from the US administration to attend the Peace to Prosperity conference in Manama, capital of Bahrain last week.

In the early hours of the morning Palestinian police raided the home of businessman Salah Abu Miaala in Hebron and took him in for questioning. His crime – last week he flew to Manama to attended the Peace to Prosperity conference to which he was invited by U.S. White House organizers.

Not only are Palestinian businessmen who attended the Manama event being hunted down by the PA. Muhammad Massad who was invited, but, decided not to go, has now learned that the PA has hired professional hit-men to assassinate him in Haifa where he now resides with his family.

“This detention and the conduct of the Palestinian Authority is illegal,” Jabari said. “There is no reason for arrest for participating in a conference, any conference. Abu Mazen is looking excuses to clash with the Americans and with Netanyahu and he wants the entire Palestinian people to line up with him. ”

The Palestinian businessman from Hebron also stated that Abu Miaala, who was arrested by the PA’s intelligence apparatus, is a cancer patient and his body is too weak to be held in detention. Jabari himself lives in Hebron in an area under Israeli control but intends to continue to enter Palestinian-controlled areas without fear of being arrested. “I am only afraid of Allah,” he stressed.

The Palestinian delegation to Bahrain included 12 Palestinians, some from the West Bank and some from Jerusalem. Since last night, Jabri has been sheltering in his home another businessman in Hebron, Ashraf Rhanem, whom the PA also tried to arrest when he returned to Bahrain. The Palestinian intelligence officers called him and and told him that he is wated for questioning, he called me and invited him to come and stay with me,” Jabari said.

Other Palestinian businessmen who took part in the workshop said they felt “very much in danger” and that they were experiencing threats from the Palestinian Authority and the social networks. “Salah came to the wedding of a family member yesterday, and then he disappeared,” Abu Miaala’s brother told Reuters news agency.

In recent days, anonymous Palestinian social networks have published the names of ten Palestinians who participated in a workshop initiated by the Americans. 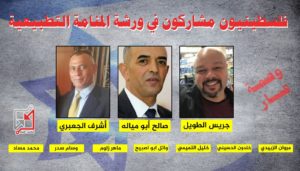 Following the criticism on the Palestinian street, Palestinian Authority Chairman Mahmoud Abbas ordered his security forces to take action against members of the Palestinian business delegation who went to the economic conference in Bahrain. The delegation returned to their homes in the West Bank at the end of the week.

General Majed Faraj’s general intelligence apparatus raided the home of businessman Salah Abu Miaala in the morning in the city of Hebron, arrested him and confiscated documents. Later, members of the General Security Service surrounded the house of another businessman Ashraf Ranem for three hours and were unable to arrest him. Following the intervention of IDF forces, they were forced to withdraw.

Sheikh Ashraf Jabari, head of the Palestinian delegation to Bahrain, also lives in Hebron, his home near the Tomb of the Patriarchs in the area under IDF control, and therefore the PA has refrained from trying to arrest him because it is a violation of the Hebron agreement.

Palestinian businessman Mohammed Massad from Jenin said he had received a warning from the Israeli security service that Majed Faraj’s general intelligence apparatus had tried to hire an Israeli criminal from Haifa to assassinate him while he was working in the city. Maדsad canceled his trip to Bahrain following a falling out and differences of opinion with the other members of the delegation, but the PA declared him a collaborator with Israel and a traitor.

Among the members of the Palestinian delegation did who travel to Bahrain, there is great disappointment with the US administration who invited them to take part in the conference knowing that this could place real threat on their lives. A member of the delegation said that the Americans promised members of the delegation protection against the PA’s harassment and attempts to harm them, and they expect the United States to keep those promises.

Sources in Fatah say that all the Palestinian businessmen who went to Bahrain in spite of the PA boycott of the conference are traitors and that they will be prosecuted and punished.

On the Palestinian street, PA Chairman Mahmoud Abbas, who was unable to prevent the participation of the Arab states in the meeting in Bahrain and the travel of the Palestinian delegation there, is criticized for “we had to stop them before the trip and not after the facts,” a senior Fatah official said.