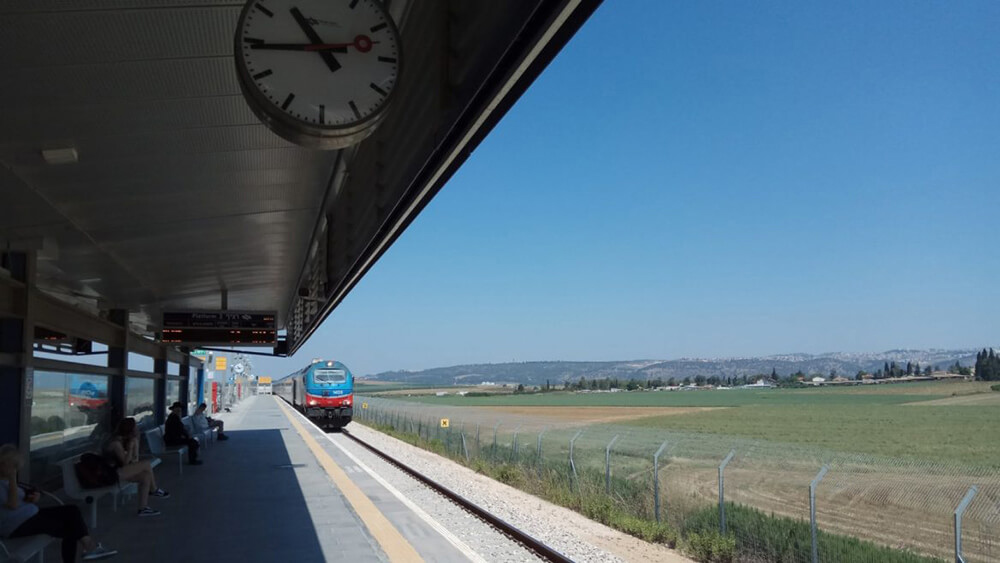 Remember the good old days when taking a train was a glamorous adventure? While we are far removed from those times, modern-day trains, especially in Israel, have become an increasingly convenient, traffic-free way to travel.

What’s more, Israel Railways lines are expanding and improving every day. Now, more than ever, you can visit different corners of the country solely by train.

Here are our favorite 11 suggestions for a stress-free day trip (imagine, no parking!) out on the train.

Get out at this station in the Malcha neighborhood of Jerusalem, far removed from the city center where most tourists roam. Here you can have two extraordinary zoological experiences: The Tisch Family Zoological Gardens (Jerusalem Biblical Zoo) and the newly unveiled Gottesman Family Israel Aquarium.

Wackier displays at the aquarium include a jellyfish gallery and clownfish bred on an Arava desert farm. There are thousands of live fish, sharks, corals and other sea animals in tanks representing the habitats of Israel’s seas, as well as other features such as a stingray feeding pool and interactive water displays that allow you to feel like you are in the tank with the big fish.

One of Israel’s largest cities, Rishon LeTzion lies just south of Tel Aviv and is a heaven of beaches, shopping and entertainment.

Get off the train at Moshe Dayan Station and you’re just a 20-minute walk or 5-minute cab ride from Cinema City, a bustling hub of modern stores, eateries, a stand-up comedy club (for those who know Hebrew) and one of Israel’s most up-to-date cinemas.

Enjoy a VIP screening of a movie in a private room complete with snacks (we hear unlimited popcorn and coffee — and an order of nachos! — are included).

Or you can just head on over to the city’s IKEA for a more tame (but no less fun) shopping outing and kosher Swedish meatballs.

A great day-trip destination in the North for families, Afula is probably one spot that missed the list of must-visit cities when you were planning your trip to Israel. However, this residential city, formerly a beacon of Israeli agriculture, has one family-friendly attraction that has the potential to keep you entertained all day long.

Get off the train in the new Afula station, and walk across the main road to Rova Izrael- the city’s brand-new neighborhood in close proximity to the expansive Afula municipal park.

Inside the gates of the park you’ll find entertainment for the whole family, including a skate park, shaded slides and other playground staples, a children’s train ride (₪10), rock-climbing wall, amusement-park rides (for a fee), and a free petting zoo with a camel, ducks, donkeys, horses and other animals.

Afterwards it’s just a 10-minute walk to Emek Center Shopping (locals simply call it “HaMitcham,” “The Compound”) where you can shop and lunch till you drop. Catch the train back after a quick stop at the Kfir Brigade Monument down the main road on the opposite side. There you can pay your respects to soldiers from this IDF combat unit who fell in the line of duty, before heading back to the train by foot. 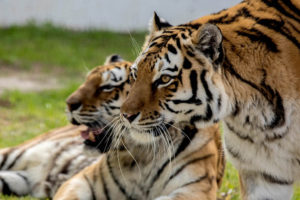 Take the train to Kiryat Motzkin for an unlikely outing in the Krayot — the municipalities that make up Haifa’s suburbs. Although more urban than you might expect, this area is filled with beautifully landscaped traffic circles (many encompassing the works of local artists) and the prized jewel of the region, the Hai Park Zoo on Hachashmonaim Street.

Inside the entrance is a large playground followed by a zoo with exotic (some endangered) animals such as Asian elephants, giraffes, an impressive reptile collection, two newly acquired Barbary lions named Samson and Delilah, Siberian tigers named Sarah and Ana, and other predators.

Not far from the zoo are many small parks, such as Park Fromer Or Haim. And be sure to visit the “motz-etz” in Gan HaBanim — a tree dedicated to helping little ones part with their beloved pacifiers once the time comes.

Afterwards head to the nearby Kiryon Mall for an elevated meal by Israeli celebrity chef Moshe Segev at Segev Kitchen Garden North (192 Derech Akko, Kiryat Bialik), or catch the Metronit fast-track bus from outside the mall into downtown Haifa to dine at any of the many restaurants or street-food vendors on Namal Street or in the Turkish Market promenade. 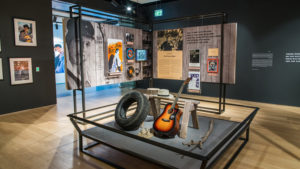 Get off the train at this North Tel Aviv stop, and after a small trek uphill you will be on the campus of Tel Aviv University, a great jumping-off point for exploring the newly updated posh neighborhood of Ramat Aviv or many area museums.

Head down Haim Levanon Street from the front entrance of the campus to the Palmach Museum to learn interactively about Israel’s early elite Jewish fighting force, or explore the Museum of the Jewish People (Beit Hatfutsot) on the campus.

At Beit Hatfutsot you’ll find a wealth of information including a permanent exhibit of replicas of world synagogues, and lighthearted exhibitions on modern Jewish heroes and global Jewish humor.

Sign up in advance, and you can even get a personal tour of the latter exhibit from Tel Aviv-based American-Israeli comedian Benji Lovitt.

Once you’re done, head down the road (20 minutes by foot, or a few minutes by taxi) for luxurious lunching at one of the neighborhood’s restaurants, such as Greco, which specializes in modern Greek tapas and drinks.

At this seaside city, we recommend you skip the crowded beach and upscale marina in favor of taking to the skies! Sky Trip allows you the once-in-a-lifetime experience of flying a plane, and its airstrip is less than a 10-minute cab ride from the train station.

From there it’s just an 11-minute cab ride to Beit Hapancake (“The Pancake House”) which will help you refuel with some sweet treats following your flight.

Once you fill up on pancakes, walk 15 minutes back to the train station. As you cross the Ayalon highway you will be face to face with Theodore Herzl (at least with a large artistic cutout of him) sitting atop the town’s water tower just across from some of the city’s top high-tech companies along the road at the Michlaf HaSira exit.

Get off at Israel’s northern-most stop on the train, and it’s just a 15-minute walk to the beachfront. There’s a well-kept walking promenade extending north and south, and a newer promenade just to the south includes Promenade Challenges Park – including a new-age playground for children of all ages, a dog park, and of course the sand and sun.

Set up an introductory diving lesson with Indigo Diving Club on the southern beach, or take a reflective moment at the monument to Naval Fighters nearby, set within rocky tide pools.

On your way back up the coast to catch the train home, satisfy your appetite at one of the town’s beach-side eateries, such as Mul Hayam (Facing the Sea) restaurant, which serves traditional salads and fish and meat dishes in a relaxed old-fashioned maritime setting.

You’ve all heard about the turmoil of life in Sderot, a southern Israel city just outside Gaza that is plagued by frequent rocket attacks. It is a town that serves as a testament to Israeli resilience and can only be fully comprehended by those who visit, talk to its residents, and experience daily life there. For safe travel, of course, it’s best not to go during times of flare-ups.

This fortified train journey is a mere one hour from Tel Aviv, and just a 12-minute ride from the seafront town of Ashkelon, but it is certain to be a trip you won’t forget. Take a guided tour of Sderot’s protected playgrounds, Iron Dome battery and Black Arrow Memorial with tour guide and local rabbi Ari Katz, or explore the town’s fully functioning college campus equipped with underground facilities.

But don’t forget to enjoy the lighter side of the city, which can be easily experienced at the best hummus shop: Hummus Shel Thina. Have a chat with its young owner, local resident Amit Yesodi, who has spread her good will through hummus far beyond her hometown to Israel’s largest cities, including Beersheva, Jerusalem and soon Tel Aviv.

Get off the train in Haifa’s Bat Galim station, and you’ll be getting a look at one of the city’s up-and-coming neighborhoods. You’ll be surprised to see the rundown urban landscape next to Rambam Medical Center quickly give way to a stunning newly constructed beach promenade.

Strolling down the walkway, you will see blossoming seaside flowers and plants next to the beautiful Mediterranean coastline. Don’t miss out on Haifa’s cable car (rachbal in Hebrew), which takes off from Shawatina Restaurant on the Bat Galim Promenade and takes you on a 5-minute journey up Carmel Mountain to Stella Maris Carmelite Monastery from which you have a panoramic view of the Haifa Bay.

Upon your return to terra firma, walk south on the promenade to the main Haifa beach area, where you may catch a beach-side meal, cold beer or fruit shake, before riding back home from the Haifa Hof HaCarmel station (that is, if you’ll ever want to leave). 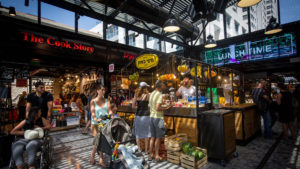 The train station’s exit leads you inside one of Israel’s largest malls, where you can aid Israel’s economy or just window-shop or grab a bite to eat. If you’re feeling fancy, skip the food court and dine at the mall’s kosher gourmet restaurant 2C, which sits high above it all on the 49th floor.

Or, for the ultimate foodie experience, head over to nearby Sarona Market, where you can roam the gourmet food stalls on your own, or take a guided tour filled with small bites and historical background through the Taste of Sarona Tour led by local foodie Erez Dayan of Siyur Sipur travel company (tour available in English).

History buffs would be sorry to miss out on a visit to the Weizmann House on the Weizmann Institute of Science campus in Rehovot, central Israel.

Just a 12-minute walk from the Rehovot Hadar train station, the historic house affords a look into the past in one of Israel’s leading research institutes. There stands the former home of scientist Chaim Weizmann, Israel’s first president.

The house is preserved complete with all his former belongings, including his Lincoln car parked out front, flourishing gardens, and his wife Vera’s bakeware in the kitchen.

Pay your respects at the Weizmann memorials just outside the house, before continuing on to discover the many corners of this beautifully manicured campus, or grab a bite not far away at Moo and Moo, a specialty beef restaurant and butchery that takes pride in aging and serving the highest quality Israeli-bred meat available.