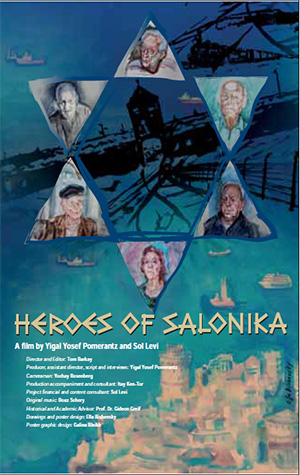 “Heroes of Salonika” is a new documentary film which sheds new light on the practically unknown genocide that befell the Greek Jews of Salonika during the Holocaust.

“Heroes of Salonika” is a new documentary film which sheds new light on the practically unknown genocide that befell the Greek Jews of Salonika during the Holocaust.

Known as “the Jerusalem of the Balkans,” the Jewish community of Salonika(Thessaloniki) was the largest Sephardi community in Europe prior to World War II. Over 50,000 Jews lived in this coastal city, the second largest city in Greece — but less than 2,000 of them survived the annihilation wrought by the Nazi barbarians during the Holocaust.

According to a previously published article on the film that appeared in the Jerusalem Post, Jewish life in Salonika dates back to ancient times, but it began to flourish at the end of the 15th century, when the city’s small community was joined by hundreds of Jews newly expelled from Spain and Portugal. This mostly Ladino-speaking Sephardi community continued to grow and prosper, often as the majority of the city’s population.

Prominent socially, culturally and economically, the Jewish community’s bright days ended with the arrival of the Nazi war machine to Greece in 1941. The Germans wasted little time in beginning to systematically persecute the Jews, with new racial laws, public humiliation and violence. In 1943, they forced the Jews into a ghetto near the railroad, and started deporting them to concentration camps, mostly to Auschwitz.

“Heroes of Salonika,” produced by Yigal Yosef Pomerantz and Sol Levy, depicts the pre-war thriving community, a home with over 40 synagogues and schools. The film follows the war years of six survivors, aged 15-20, as they arrived at the Auschwitz concentration camp in Poland.

Pomerantz told the Jerusalem Post that as someone who had never studied filmmaking he did know that he needed money for the film, and that he needed professional film people to make it. “So that’s what I did. I went out and started to contact potential sources of funding, and I went around shopping for support for the film. When I had that, it was enough for me to get started.”

Filmed from 2015-17, the survivors, then in their late 80s and early 90s, relate events and details with crystal clear clarity, almost as if being presented contemporaneously. Historical footage is interspersed throughout the documentary with a musical score reflecting Salonika’s heritage of Ladino culture.

One of the heroes, 15-year old Jaco Maestro, at great risk, saved hundreds of Jews in Auschwitz. When the Germans occupied Greece, Maestro, as a child, learned German while shining shoes and selling trinkets to German soldiers.

Upon arriving in Auschwitz, Maestro used his knowledge of German and his ingenuity to become a translator and an assistant to Jerzy Pozimsky, the head of the prisoners’ labor office. Maestro, having access to prisoners’ files placed Jews and Gentiles alike in positions which were more tolerable, giving them a possibility to survive their bitter incarceration.

Greek Jews, placed by Maestro in the Canada section of Auschwitz-Birkenau would smuggle diamonds and gold currency. These precious items were then forwarded to Jaco to bribe the Germans so that he could save more inmates.

Prof. Dr. Gideon Greif, of Yad Vashem served as the film’s historical and academic advisor. Dr. Greif regards Maestro’s rescue efforts as unique in the annals of the extensive history of Auschwitz and the Holocaust.

Additionally, the film, is intended for non-Jewish audiences who are not familiar with the history of the Holocaust.

“Heroes of Salonika” was recently broadcast on the Keshet-12 news channel in Israel on Holocaust Remembrance Day and over 300,000 people viewed the film and were captivated by its powerful content. Subsequent to the film’s premiere on Israeli television, the station was deluged with superlative reviews of the film.

“This documentary really caught the interest and attention of the people in Israel as few were really clued into the history of Greek Jews during the Holocaust, “ said a source familiar with Keshet 12. “The stories that the survivors relayed in the film were beyond impactful in a multitude of ways. Their testimonies brought hitherto unknown information into the historical record for posterity. As the actual number of survivors of the Holocaust are dwindling with the passage of time, it is exceptionally important to have their narratives documented for the purposes of archival research and for the utilization in educational programs of future generations who will learn about the Holocaust,” the source added.

Dilemmas involving family loyalty, faith, and survival are presented so that audiences can empathize with the universal struggle for human rights and social justice.

“Heroes of Salonika” has been translated into English.

For more information on “Heroes of Salonika” and to make a donation for the English language production and distribution of this important film please send inquiries to: [email protected]. Heroes of Salonika also has a Facebook page