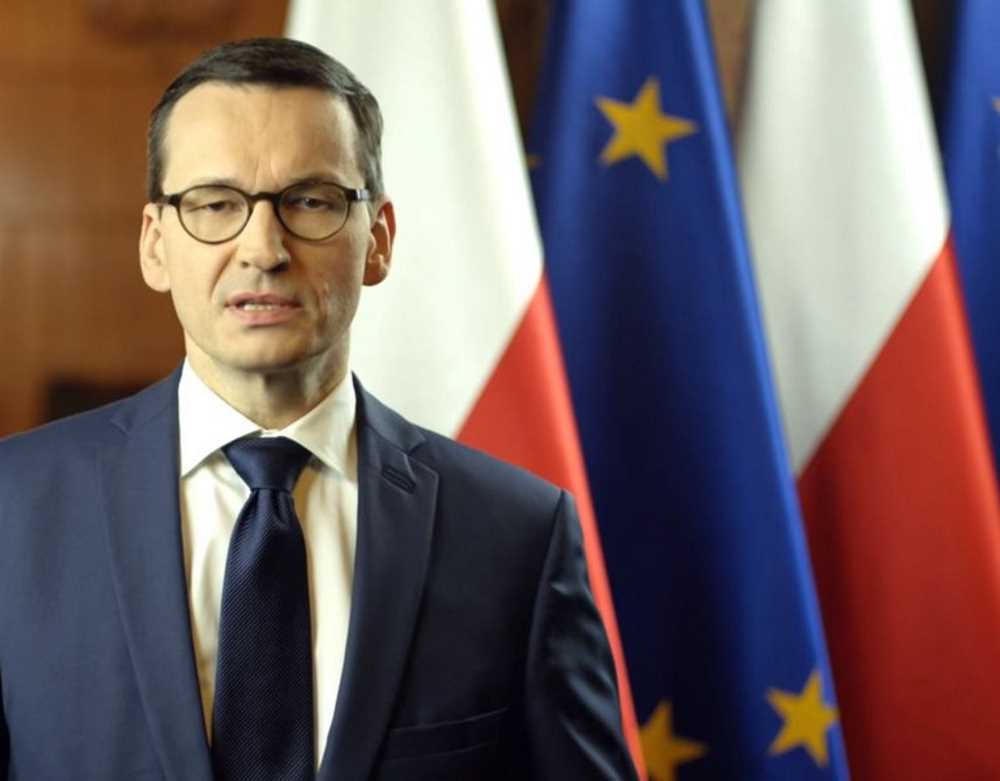 Polish Prime Minister Mateusz Morawiecki, in remarks over the weekend, told a crowd of supporters that Poland would never compensate Holocaust survivors for their losses, a political rallying cry that has garnered him support of hardliners. "We'll never pay WWII property compensation as we were main victims," the prime minister was quoted as saying. Photo Credit: Poland.pl

A coalition of lawmakers in Congress are considering a range of initiatives that would force the Trump administration to demand Poland resolve Holocaust-era claims before the United States agrees to host a permanent military base in the country that has come to be known as Fort Trump, according to multiple U.S. officials and other sources working on the matter.

The Trump administration and Polish officials have been in talks for some time to establish a new permanent U.S. military base in the country to counter threats posed by Russia and Iranian regime assets known to have plotted terror attacks in the region.

However, many members of Congress and top Jewish communal officials behind the scenes have been lobbying the Trump administration and Secretary of State Mike Pompeo to amplify the matter.

Poland remains the only country in the European Union to not have instituted laws mandating restitution to aging Holocaust survivors and their families who had their property and other assets confiscated during World War II. Poland—which is experiencing a resurgence in anti-Semitism—has balked on these demands, arguing that it was just as much a victim of the Nazis as the millions of Polish Jews who were sent to death camps.

With negotiations over Fort Trump ongoing, lawmakers see an opportunity to use U.S. leverage to force Poland to finally confront the restitution issue. Pompeo has raised it several times in talks with Polish officials, winning plaudits from Jewish groups. Sources at the State Department say the conversations are ongoing.

It could fall to Congress, however, to issue legislation that would withhold funding for Fort Trump until the restitution issue is resolved, according to multiple congressional and Jewish community officials who spoke to the Washington Free Beacon about the matter.

“On Holocaust assurance, [the Poles] are using restitution as a game and bringing more anti-Semitism to a country with a heavy history,” said one congressional source familiar with efforts to push the restitution issue. “Basically, there is no way they should get the benefit of a fort without resolving these issues.”

The issue of Polish restitution comes at a tense time in Europe, as anti-Semitism surges across the continent, particularly in Poland, where scores of nationalist protestors took to the streets last week to advocate against Holocaust restitution. Many of the protesters used anti-Semitic images and rhetoric as they attacked President Donald Trump, pro-Israel members of Congress, and Jewish groups who support restitution.

Polish Prime Minister Mateusz Morawiecki, in remarks over the weekend, told a crowd of supporters that Poland would never compensate Holocaust survivors for their losses, a political rallying cry that has garnered him support of hardliners.

“We’ll never pay WWII property compensation as we were main victims,” the prime minister was quoted as saying.

These latest developments have fueled calls by advocates to link Fort Trump to the restitution issue in a bid to exert pressure on Poland to resolve the matter.

A congressional letter circulating on Capitol Hill urges Secretary of State Pompeo and the White House to pressure their Polish counterparts over the restitution issue, according to a copy of that draft letter viewed by the Free Beacon.

“Now is the time, while the last Holocaust survivors are still alive, to back up our words with meaningful action,” the letter states. “We encourage you to pursue bold initiatives to help Poland to resolve this issue as quickly as possible.”

Poland has not yet fulfilled its promises to Holocaust survivors and others from whom property was confiscated and time is running out,” the letter warns. “As staunch supporters of the U.S.-Poland relationship, we are writing to urge you to act boldly and with urgency to help Poland resolve this issue comprehensively, and in the context of strengthening the bilateral relationship between our countries.”

Poland remains an outlier when it comes to Holocaust restitution, having refused multiple bids by Jewish groups and others to pressure the government into acting.

“After the war, the Communist regime in Poland nationalized property owned by Jews and non-Jews,” it continues. “In the decades since the fall of the Iron Curtain, Jewish Holocaust survivors of Polish origin and their families as well as others have found it nearly impossible to reclaim or seek compensation for the property that was nationalized by the Polish Communist regime. In fact, Poland is the only country in the European Union that has not passed a comprehensive law for the restitution of private property, despite pledging to do so in 2009 when it endorsed the Terezin Declaration on Holocaust Era Assets along with the United States and 45 other nations.”

As the last remaining Holocaust survivors grow older, U.S. lawmakers say it is finally time to acknowledge their claims and provide relief.

“Seventy-four years after the end of the Second World War, the remaining Holocaust survivors are aging and cannot wait any longer for justice,” the letter states. “That is why 59 U.S. senators wrote to the Prime Minister of Poland in March 2018 urging the passage of legislation that would meet the Terezin Declaration’s standards by creating a claims process conducted ‘in a fair, comprehensive and non-discriminatory manor.'”

In May 2018, Congress unanimously passed the Justice for Uncompensated Survivors Today, known as the JUST Act, to help hold nations such as Poland responsible for their commitments to help these Holocaust survivors.

The State Department under Pompeo has raised the issue multiple times and U.S. officials say the Trump administration will continue to do so.

“As the secretary stated, we appreciate the importance of resolving outstanding issues of the past, and we urge our Polish colleagues to move forward with comprehensive private property restitution legislation for those who lost property during the Holocaust era,” a State Department official told the Free Beacon.

“The Department will continue to engage officials in Poland, as well as others in the region, to discuss restitution of Holocaust-era property, compensation, Holocaust education, and how best to preserve and protect important Jewish heritage sites,” the official said.

Eric Gallagher, Washington representative for the World Jewish Restitution Organization, told the Free Beacon that Pompeo’s efforts to raise the issue have helped place it in the public forefront.

“It was highly significant that Pompeo raised the issue and we appreciate the secretary’s leadership on this,” Gallagher said.

One veteran Jewish communal official who has worked on the matter told the Free Beacon that Congress is frustrated over Poland’s intransigence. Top Polish officials, sources said, failed to respond to the 2018 letter sent by nearly 60 senators urging the Polish government to finally resolve the matter.

“Poland should not test their relationship with the Jewish community, or Israel for that matter, by their continuing intransigence in refusing to include restitution,” said the source, who requested anonymity to discuss the issue frankly. “But more than that, by not stepping up to do the right thing, Poland is threatening its national interests by putting its most important diplomatic relationship at dire risk—the United States is America. If they’re not going to listen to us, as Jews, they’ll need to listen to us, as Americans.”

A second Jewish communal insider also familiar with the matter said that Poland is unwisely jeopardizing its relationship with the United States.

“I think Congress is getting frustrated because Poland has been insisting that it intended to resolve the issue of private property restitution, and then after Pompeo visited Warsaw it reneged on that promise, and publicly,” said the source, who would only speak on background to discuss private meetings. (Washington Free Beacon)