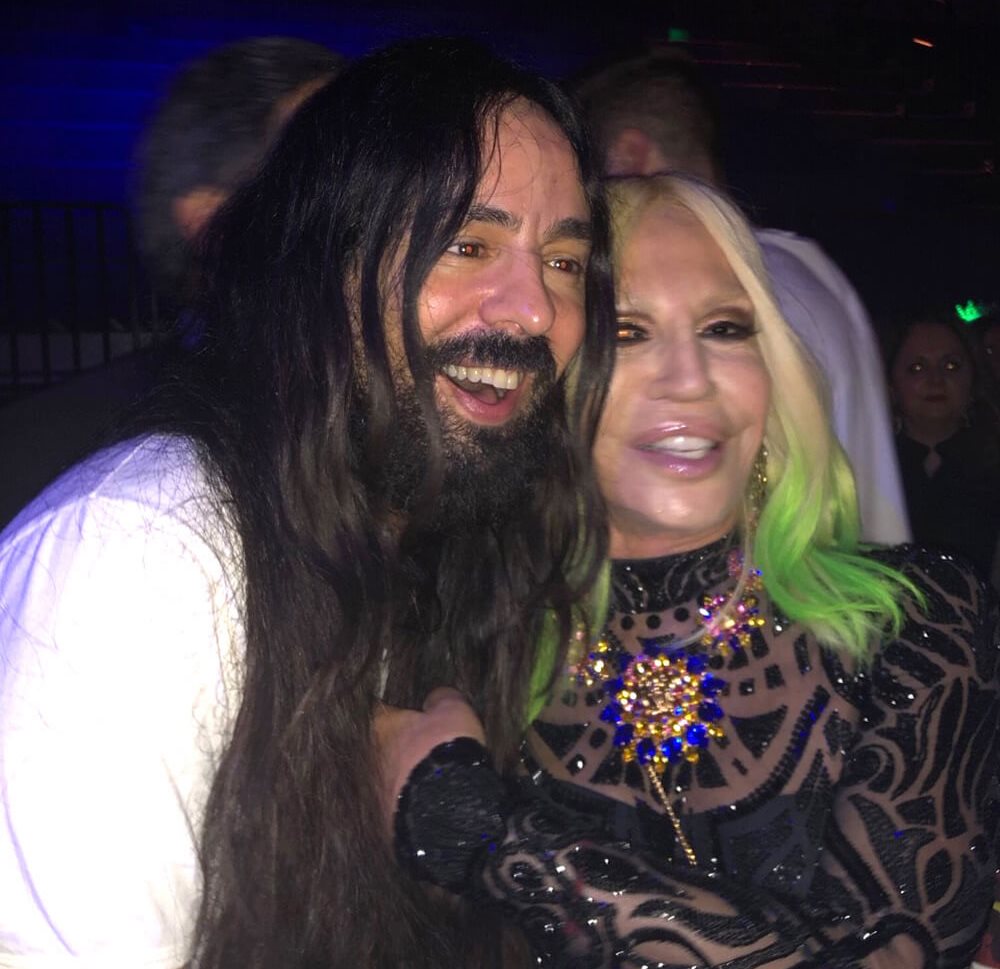 Despite the Met Gala occurring a week ago, its effects are still reverberating today.

The pink carpet and swan-filled dining room complete with pink roses lent a unique air to this annual event.  While reviews of the “Camp” exhibition have been less than stellar, with claims that the collection failed to adequately delve and explore the origins of camp, analysis of the gala has been more favorable with many of the opinion this year was unrivaled.  Gucci, the corporate underwriter, was the clear winner of the evening, dressing the most guests-25 men and women- and receiving 45,000 mentions on social media.

Dolce and Gabbana, and their attire, was noticeably absent from the carpet as they have been involved in numerous controversies including their racially charged Asian campaign which started a boycott in China.  Certainly, this year’s outrageousness and flamboyance was unparalleled. At $30,000 a ticket the gala was sold-out months in advance and the more than 550 guests were the most eclectic group ever seen at this happening.  Wintour veered away from the white-hedge-fund-guy-and-his-wife-model, and instead introduced the public to a group that was multi-faceted and unpredictable. Surprisingly she didn’t invite Betsey Johnson, Bjork, Boy George or Cyndi Lauper-all of whom were forerunners of the “camp” trend but apparently lacked the cool factor.

Photographer Annie Liebovitz was front and center sitting near curator Andrew Bolton being that she was the partner of Susan Sontag who penned the Poem “Notes on Camp” upon which the exhibit is based.  Some other guests included a surprisingly large contingent of Asian Americans including Henry Golding, Lana Candor, Awkwafina, Coral Chung, and Gemma Chan; a number of Latinos including JLo and ARod, Maluma, Thalia and Camila Coelho: and a healthy representation of African American artists including Danai Gurira, Lizzo Beating, Bevy Smith, Ava Duvernay, Kiki Layne and Jeremy Harris-many of these were first time invitees. This was also the first year drag queens Violet Chachki, RuPaul and Aquaria were welcomed on the red carpet.

Moreover, Bollywood and the Indian community were well represented with Deepika Padukone, Priyanka Chopra and Isha Ambani making big splashes.  Isha Ambani is the daughter of the richest man in Asia, Mukesh Ambani, and recently got married in a wedding that cost over $100 million-way to go Anna.  There were other billionaires in the crowd including the indomitable Jeff Bezos, Sean Parker, Francois-Henri Pinault and Mike Bloomberg whose combined net worth totals over $250 billion-more than the GDP of many countries.

I am still grappling with the absence of Beyonce, Blake Lively, Rihanna, Madonna and Sarah Jessica Parker-especially since they failed to provide valid excuses with Sarah and Madonna at a New York dinner two nights before.  Where were Amal and George, Anne Hathaway and Adam, Bradley and Irina (Irina was alone)? Why did Gwyneth who bravely called the Met Gala un-fun in 2013 decide to return in 2017 and 2019 looking glum and receiving little press attention- her Florence Nightingale Chloe gown looked like a secondhand wedding dress; if you do make a comeback make sure to look great Gwynnie or stay home.

Some other stars who went virtually unnoticed due to their mediocre attire included Penelope Cruz in a dreadful black-and-white Chanel, Karlie Kloss in an H&M looking Dapper Dan Gucci, Carey Mulligan, Kerry Washington (don’t go Tory Burch when you are going camp), Katie Holmes (a been there done that Zac Posen), Sienna Miller, Zoe Saldana (the worst), the Olsen twins, Gal Gadot and Emma Stone (in a Louis Vuitton custom jumpsuit that looked like a Studio 54 reject).

Cardi B missed the mark in a three-meter long red floor length Thom Browne couture gown that took 35 people more than 3,000 hours to create-she looked like a giant hot water bottle.  Similarly, Ralph Lauren misinterpreted camp as “cowboy” dressing his son David and Patrick Schwarzenegger in cowboy hats and clothing. Marc Jacobs, who showed up in 2012 in a black lace dress that caused an earthquake in the fashion industry, played it safe this year in a mundane black tuxedo-shame on him-and dressed Rita Ora and Kate Moss in similarly ho-hum attire.

Those with headgear looked dreadful including JLo who thought her boobs and butt might do the talking and Celine Dion who looked like a washed up Vegas showgirl.  Kim Kardashian who copied Beyonce’s 2016 Met Gala Givenchy latex dress in a skintight Mugler gave some excuse about wanting to look like a wet Sophia Loren when it was clear she was just trying to show off her new breast and butt implants and lipoed waist.  The ultimate in “camp” might be Kanye’s wearing of a $50 Dickies jacket called “The Eisenhower” modeled after a World War II Style and Frank Ocean’s similarly dressed down black zip up. 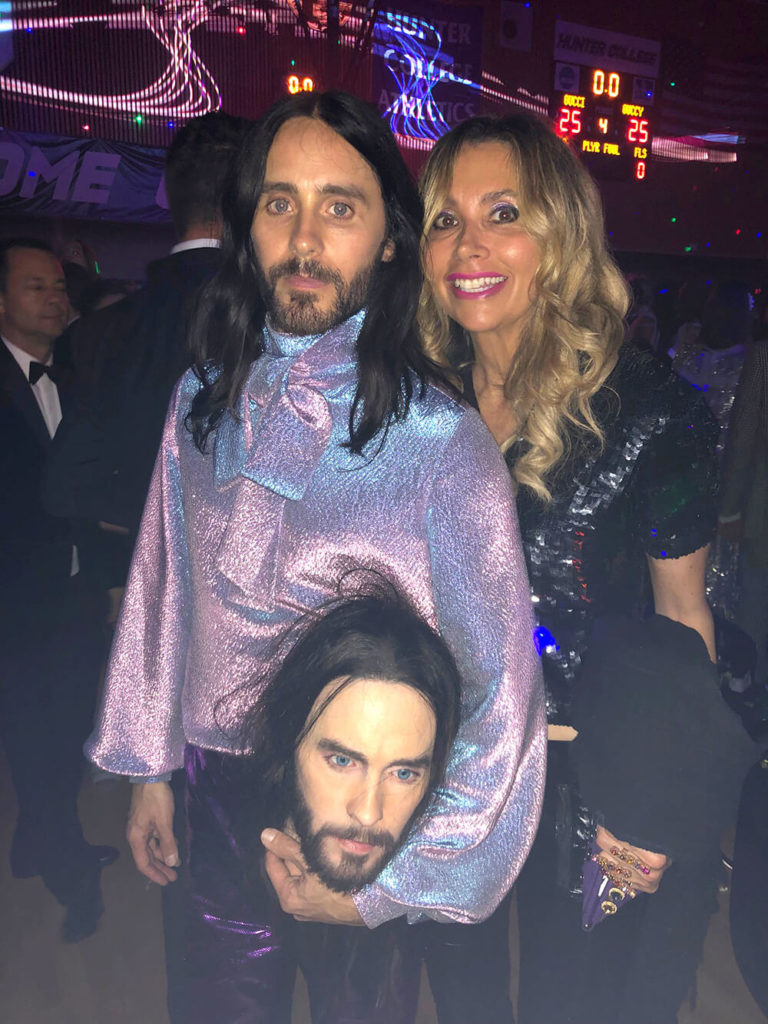 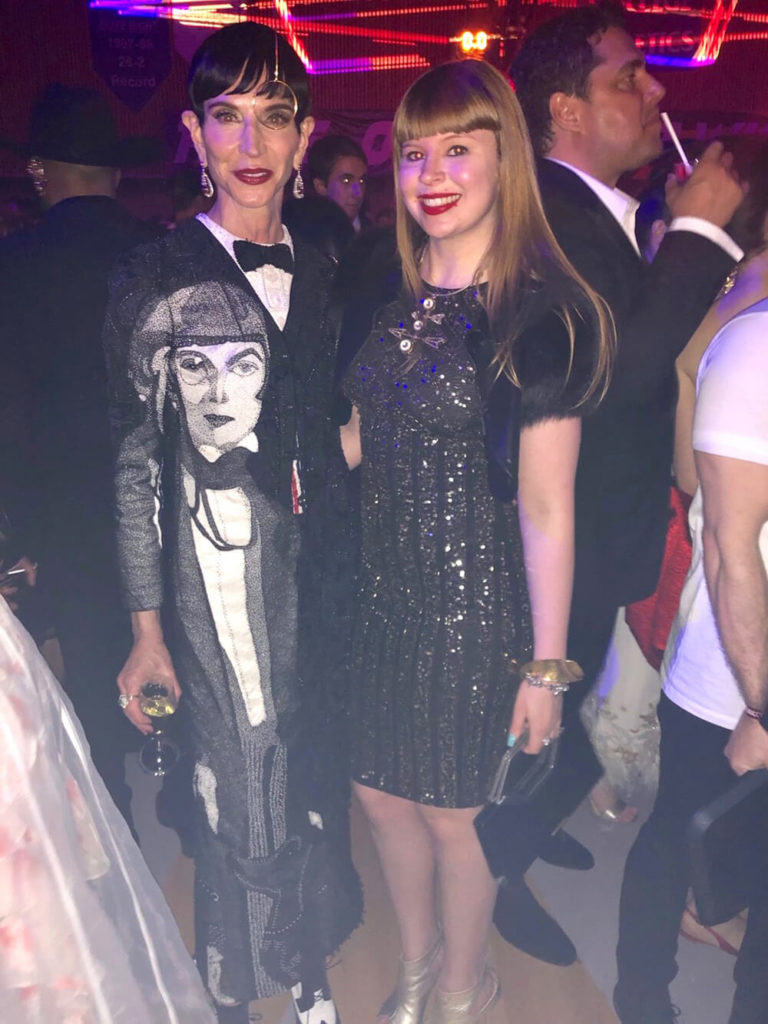 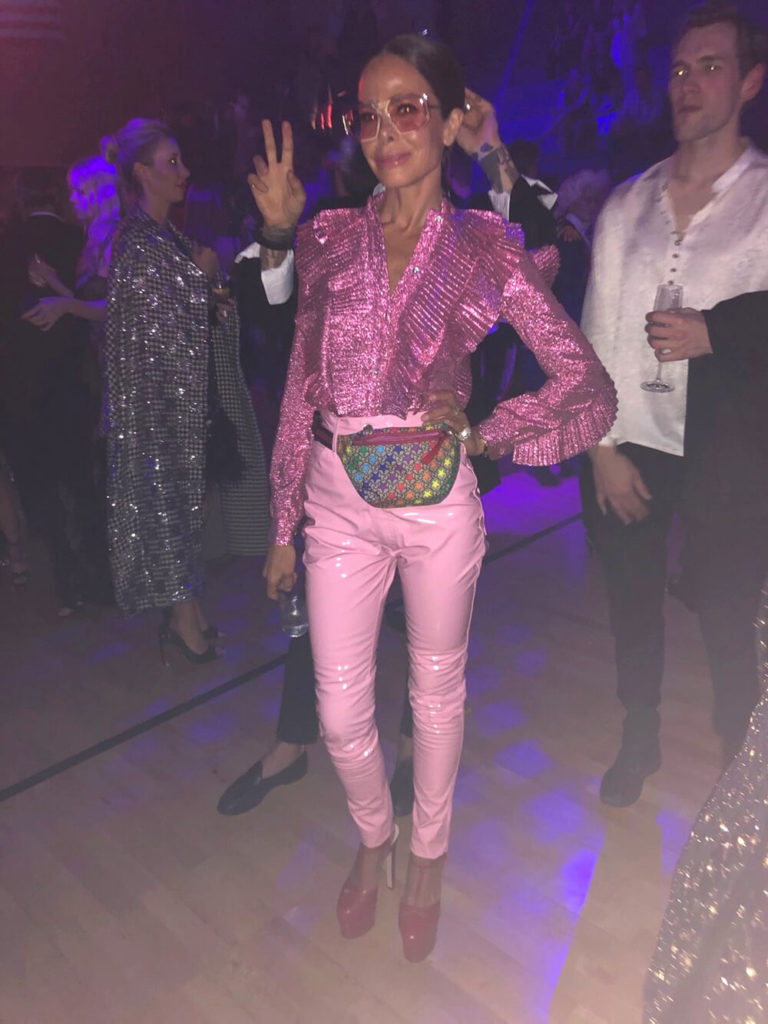 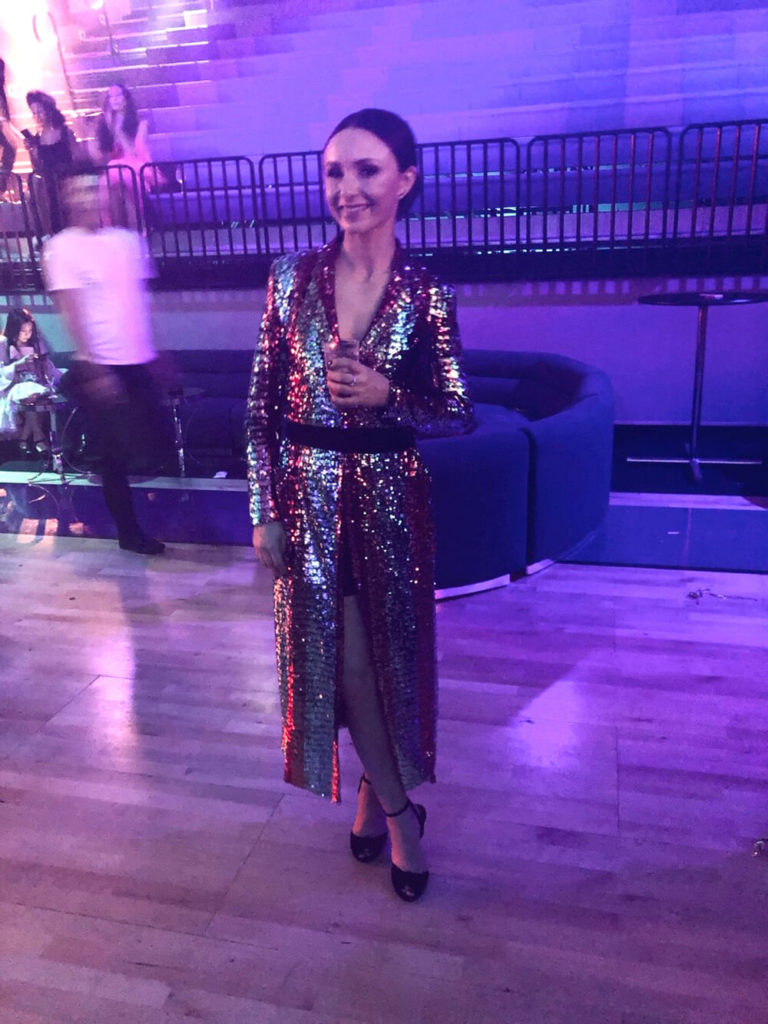 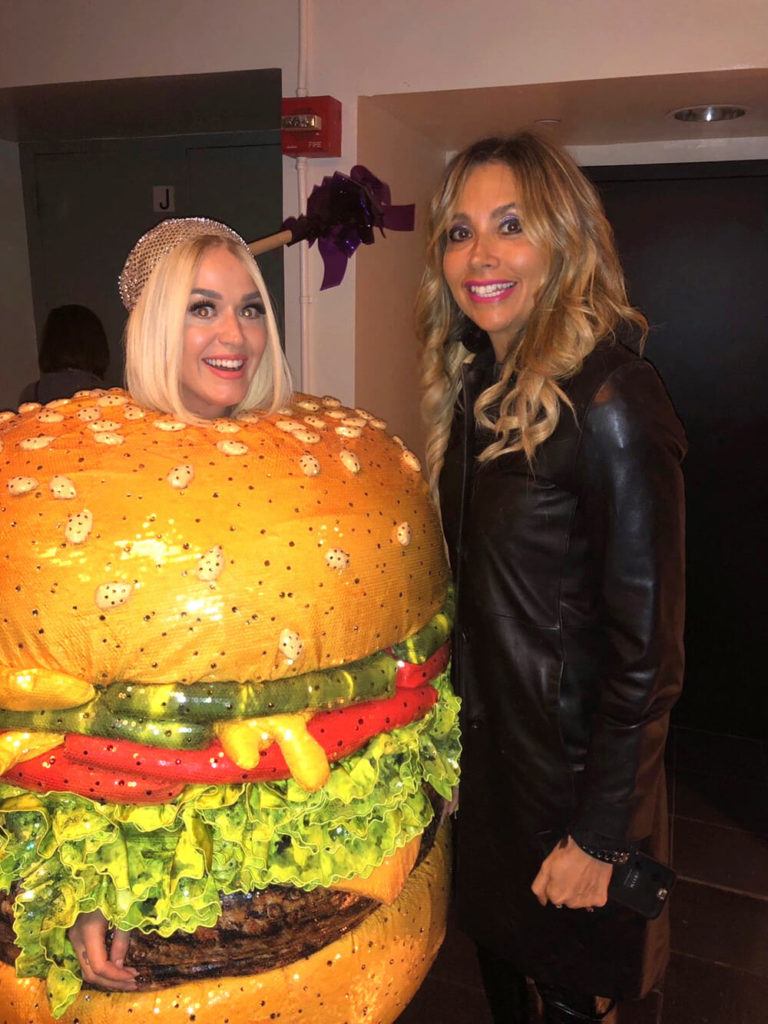 Katy Perry with our writer and photographer Lieba Nesis 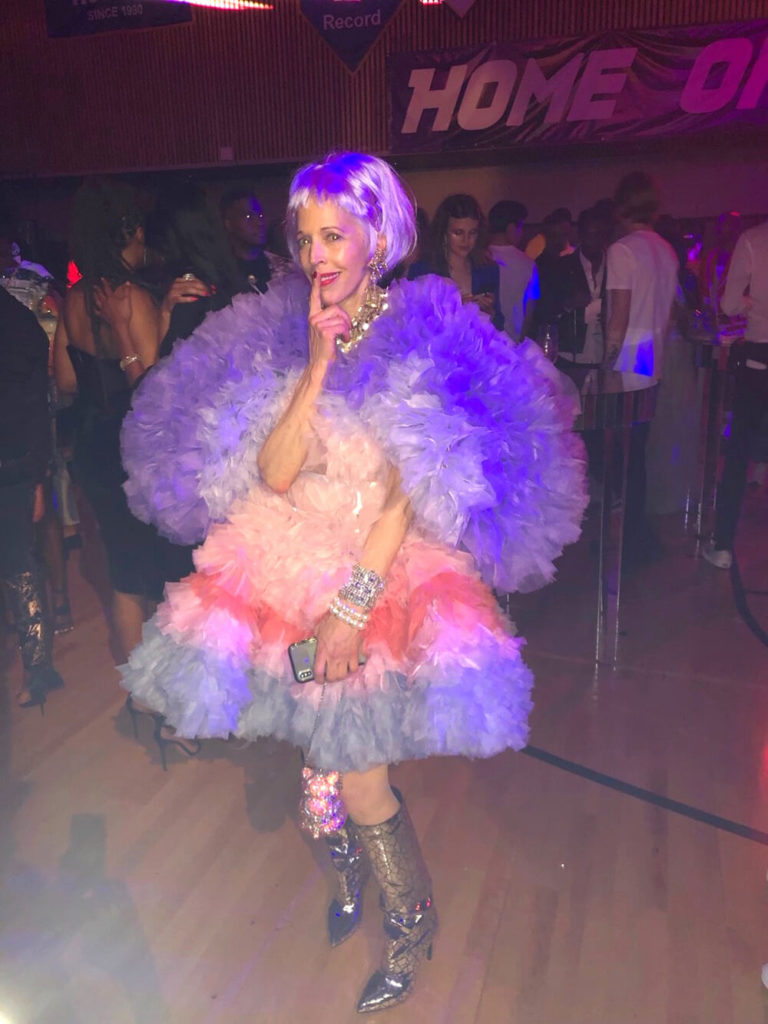 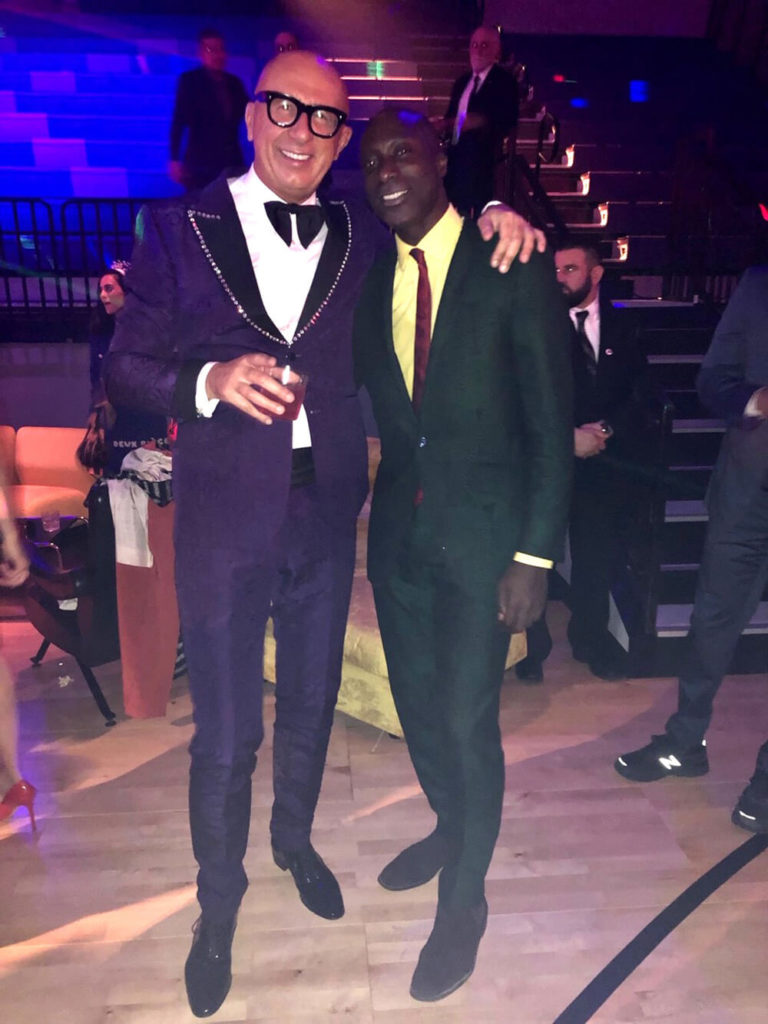 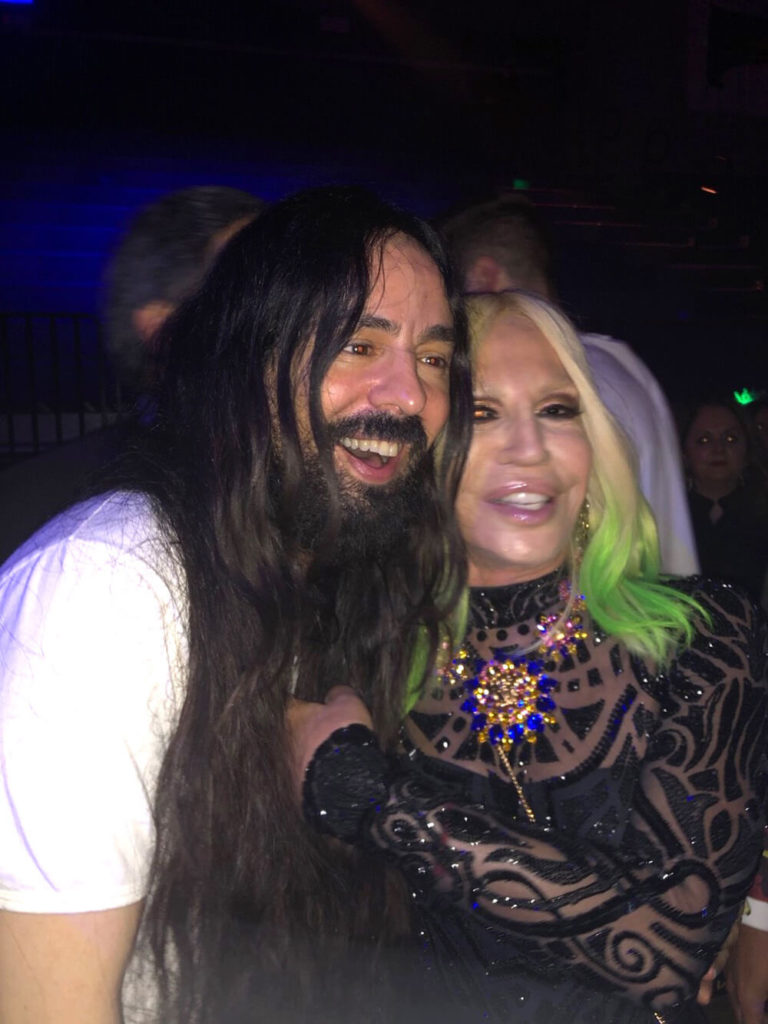 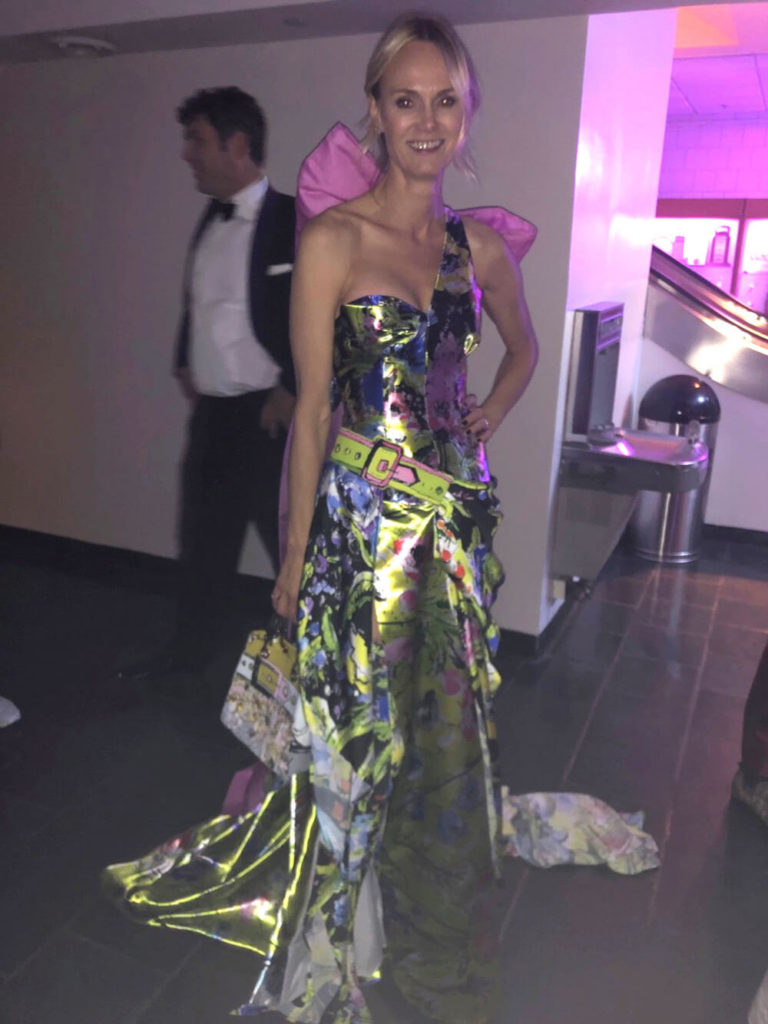 The winners of the evening were those who went all out and received the most press attention doing so while competing with a room full of celebrities and that prize would go to Katy Perry, Lady Gaga, Billy Porter, Jared Leto, Ezra Miller and Janelle Monae.  Katy Perry wore two outrageous Moschino looks including a functioning chandelier and a full-on hamburger outfit. Lady Gaga turned her entrance into an event walking three blocks to the Metropolitan Museum of Art in a flowing Brandon Maxwell cape dress with a 25-foot train.  She unveiled her four-layered look in a 15-minute presentation that was rehearsed months in advance-even Wintour admitted that was impossible to top.

Jared Leto was similarly unabashed with his 3D Printed Gucci personalized head which cost $11,000 to make and over six months to create.  In the realm of faces, Janelle Monae and Ezra Miller gave us plenty of eye candy with Monae’s Christian Siriano look replete with a fluttering eyelash and a hat full of hats and Ezra Miller’s countenance including seven eyes painted onto his face.  Back to Kim Kardashian who revealed her dreadful Met Gala look took over a half a year to create and required corset breathing lessons from French couturier Mister Pearl. The getup contained a nude corset complete with Spanx and required three assistants to strap her into the bodysuit.

Someone else who needed some help fitting into his Versace tuxedo was Alex Rodriguez who revealed he went on a twenty-four hour water fast to lose 6.5 pounds in two days for the Met Gala in order to fit into a size 44 when he normally wears 48.  He also took two yoga classes, ran the stairs for an hour and wore a suit to increase sweating-what men do for beauty.

A 72-year-old  who has done plenty to maintain her beauty is Cher who regaled the audience with her “I wonder what your granny is doing tonight?” comment as Lady Gaga stripped to her skivvies and recited a Susan Sontag poem before introducing her.  As far as entertainment, Cher this year and Madonna last, is not up to par with a $30,000 per ticket event. Serena Williams, sans bottomwear, introduced Ru Paul another disappointment for a super A- list evening. After all the excitement of the night had concluded, attending a dinner the following evening where nobody appeared in million dollar costumes composed of mustard bottles or fake body parts left me slightly disappointed.