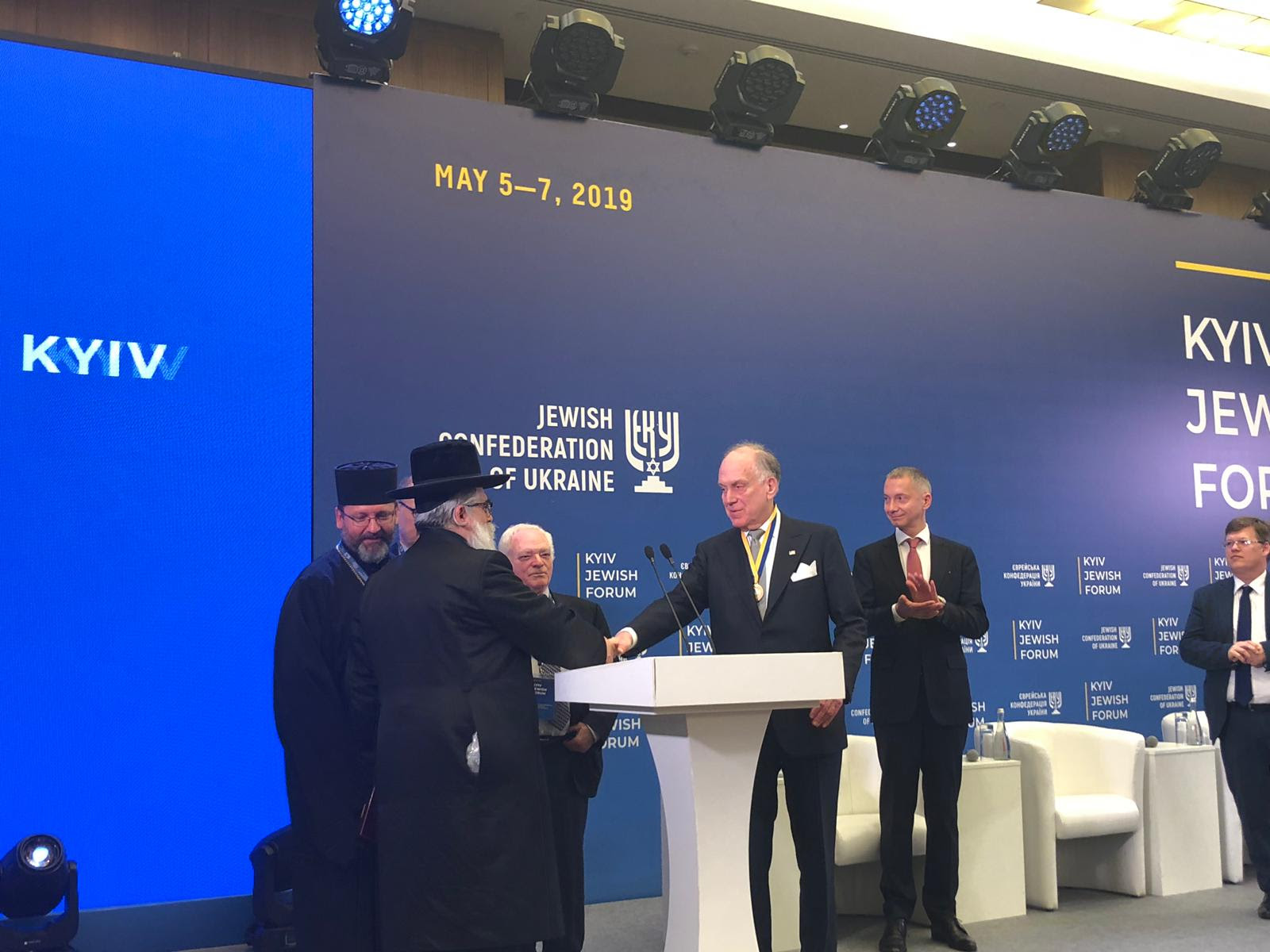 The World Jewish Congress joined the Jewish Confederation of Ukraine on Monday for its inaugural Kyiv Jewish Forum, a two-day event aimed at promoting deeper ties between the Ukrainian Jewish population and world Jewry and offering a platform for galvanizing European efforts in the fight against antisemitism.

During the forum, Archbishop of the Ukrainian Greek Catholic Church Sviatoslav Shevchuk and Chief Rabbi of Ukraine Yaakov Bleich presented WJC President Ronald S. Lauder with Ukrainian-Jewish Encounter’s Sheptytsky Medal for deepening relations between Ukrainians and Jews. In accepting the honor, Lauder underscored the fact that “Jews should be able to live in peace without fear,” and dedicated the award to “all of the people around world who stand up and speak out again antisemitism and injustice.”

In his address to the forum, WJC President Lauder praised the government of Ukraine for its efforts to support the local Jewish community and for maintaining relatively low levels of antisemitsm. “While the history of antisemitism in Ukraine can never be erased, I see the Ukrainian Christian community and the Ukrainian Jewish community moving forward together.” Lauder also stressed the need for unity among the Jewish people, saying: “We have many differences, left-right, religious-secular, but we face big challenges and we need to work together.”

The first day of the forum included keynote addresses and panel discussions on a number of topics, including Jewish identity in the 21st century, the Ukrainian-Israel Relationship, and the future of global Jewry. WJC CEO and Executive Vice President Singer moderated a panel discussion on combating antisemitism within a global context, in which he thanked the Ukrainian authorities for helping to ensure a thriving Jewish life in the country, but also noted the government’s “failure to confront the most bitter chapter in Ukraine’s wartime history,” a continued catalyst for antisemitism in eastern Europe.

Singer also stressed the fact that amid the rise of Jew-hatred around the world, “no-one has a monopoly on antisemitism, neither the left nor the right, nor extremist Islam. However, there is one thing on which they can all agree, and that is that the Jew is the enemy – even if they try to disguise their hatred as opposition to Israel.”

On the sidelines of the forum, WJC President Lauder and WJC CEO Singer also met privately with Ukrainian Prime Minister Volodymyr Groysman for productive talks about the Ukrainian Jewish community and Ukraine’s bilateral relationship with Israel.

The forum will continue on Tuesday with panel discussions on preventing antisemitism and anti-Zionism on a parliamentary level, the role of the Jewish community in promoting global peace and security, and the importance of memorializing the Holocaust.