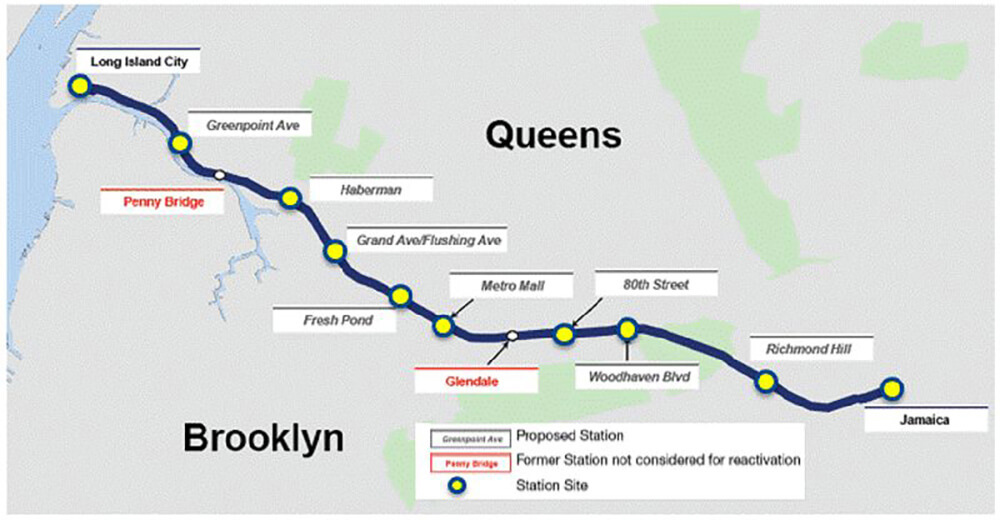 The proposal would bring nine stops to the stretch, and would cost an estimated $2.2 billion to pull off, and serve roughly 21,000 weekday riders.

Queens residents and officials are once again talking about using the Long Island Railroad’s Lower Montauk branch — 8.5 miles of track linking Long Island City and Jamaica – to provide rail service to communities that have no subway stops.

The line was in operation for years until 1998, when a paucity of riders moved the MTA to close it down, using it instead for Sunnyside Yard storage.

A feasibility study began in 2017 and was finished early on in 2018. It was commissioned by then-Councilwoman Elizabeth Crowley (D-Queens). She is back once more, trying to champion the project. She reportedly is asking for nine train stops for the approximately 21,000 riders per week. The project would reportedly cost $2.2 billion.

“Queens is not getting its fair share of transit and local residents feel beyond frustrated with their daily commutes times,” Crowley told the New York Daily News. “Trains would run on existing MTA owned rights of way, the line could be used immediately without eminent domain.”

“As the report notes, this proposal would pose serious challenges to the MTA, in the form of high operating and capital costs at a time of substantial deficits,” MTA spokesman Max Young noted in the same article.

Another longtime supporter of the project, transportation consultant Philippa Karteron, told the Daily News, “Look at the growth in Long Island City and the growth in the Jamaica downtown area and at JFK Airport. If we could put something like this together, the corridor could be an economic development corridor, bringing in businesses, bringing in jobs.”

On her web site, elizabethcrowley.com, Crowley makes the case that Queens “is New York City’s fastest-growing borough. We are experiencing not only the largest increase in population, but also growth in workforce and economic development. As a city, it is crucial we support this growth with an expansion of smart, sustainable transportation.”

Improved public transportation and interborough (Brooklyn-Queens) transit are greatly needed to ease the burdens this growth has brought, she notes. “However, Queens currently lacks this infrastructure, with not enough transit options and some of the most overcrowded streets. Commercial corridors such as Fresh Pond Road, Myrtle Avenue, Metropolitan Avenue and Grand Avenue are plagued with congestion, unreliable bus service and overcrowded subways. This congestion and overcrowding happens around the clock, and is exasperated at rush hour.

“But through these transit-poor communities runs the LIRR Lower Montauk branch,” she continues. “It runs east to west, and is still maintained by the LIRR, but used limitedly by the New York Atlantic Railway for private freight transport. This public right-of-way is an invaluable resource that must be tapped and used for local commuters’ benefits.”

DOT Queens Borough Commissioner Nicole Garcia is quoted as saying, “Improving transit options in Queens means better access to jobs, shopping and services, and quicker routes to schools, home and loved ones. We thank Council Member Crowley for her leadership and support and for the opportunity to conduct this important feasibility study for commuter rail on the LIRR Lower Montauk Branch.”