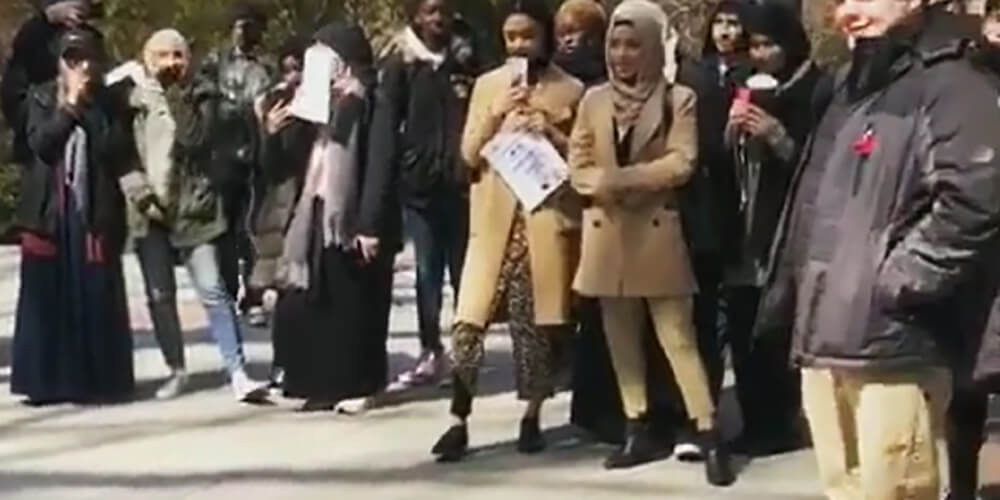 Additionally, an unidentified student accurately mentioned that there were six Palestinians who were killed in the shootings, but blamed, in addition to anti-Muslim rhetoric, a lack of “empathy” that is not only in New Zealand but “also in America,” citing the backlash that some young activists faced in confronting former President Bill Clinton’s daughter, Chelsea Clinton, and blaming her for the rhetoric behind the shooting.

“Forty-nine people died because of the rhetoric you put out there,” Clinton was told by Muslim student Leen Dweik.

The unidentified Brooklyn College student also accused the media of covering up the six Palestinians killed, though numerous outlets reported it.

This isn’t the first time support for an intifada was witnessed at Brooklyn College.

During a time of car-ramming and other attacks on Israeli civilians—and just two days after a bus was hijacked by Palestinian terrorists who then murdered two Israeli civilians in 2015—Brooklyn College Students for Justice in Palestine posted a flier calling for a “Third Intifada,” supporting the terrorism that had ensued, stating, “Respect Existence; or Expect Resistance.”

CAMERA on Campus called on “the Brooklyn College Student Union to remove this video calling for violence and apologize to the Jewish and Israeli community for this egregious mistake.”

During the First Intifada, launched in 1987, Palestinians used rifles, hand grenades, firebombs and explosives against Israeli targets, as part of popular protests against continued Israeli rule. The Second Intifada took place during the early 2000s, and saw Palestinians carry out multiple suicide bombings and shooting attacks against Israelis, as was reported in the Algemeiner.

The BC Student Union, which shared media from the event, plans to co-host the first event of “Israel apartheid week” at Brooklyn College on Thursday, in honor of the “Great March of Return” protests. That Palestinian campaign, which was launched in Gaza last year with the aim of pressuring Israel to accept Palestinian refugees of the 1948 Arab-Israeli War and their descendants, has seen a heightening of violence by the Israeli-Gaza border.

“[Commemorate] the great march of return with us, [BC Student for Justice in Palestine, BC Socialists and BC Sociology Club] as we read the names of those who have been murdered at the gaza border by the israeli occupation forces • • • ️,” the union wrote on Instagram.

NY Students Get Out of Taking Regents Exams; Can Graduate Without Them