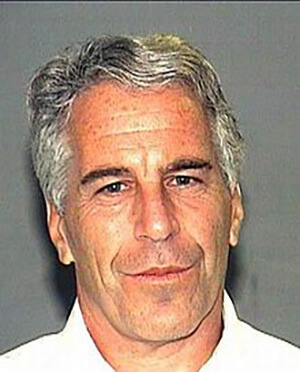 Among the leading candidates for a Pulitzer Prize in investigative journalism is the Miami Herald and its reporter Julie K. Brown for its series on the Jeffrey Epstein case. Epstein is pictured above. Photo Credit: Wikipedia

Among the leading candidates for a Pulitzer Prize in investigative journalism is the Miami Herald and its reporter Julie K. Brown for its series on the Jeffrey Epstein case. The series, however, was not based on rigorous and objective investigation, but rather on one sided, and largely false tips from self-interested lawyers who used the series to their financial advantage. Brown refused to investigate and/or publish highly credible information that undercut the simplistic and largely false narrative fed her by her biased sources. I know, because I have been providing her with much of the documents and information she chose to bury rather than report. Had she reported this contradictory material, she would have endangered the Pulitzer Prize she has been aiming to win. The Pulitzer Committee should not reward such biased and result oriented “reporting” by giving her the prize.

Here is the truthful narrative Brown refused to report. Every fact can be documented. At the center of Brown’s story in a woman in her mid-30s named Virginia Roberts Guiffre, who has a long and documented history of lying about sexual and other encounters with famous people, including presidents, prime ministers, princes and other politicians and celebrities. She sold a story for $160,000 to a British scandal sheet in which she described in great detail meeting Vice President Al Gore, his then wife Tipper and President Bill Clinton on Jeffrey Epstein’s Caribbean island. The only problem is that Secret Service and other records conclusively proved that none of them was ever on that Island and that the Gores didn’t even know Epstein.

Yet she subsequently committed perjury by swearing to these falsehoods. Among the men she accused of having sex with her when she was underage were a former Senate Majority Leader, a former United Nations Ambassador, a former Israeli Prime Minister and a head of state. She also accused Leslie Wexner, a billionaire owner of Victoria’s Secret, of having underage sex with her on multiple occasions and making her wear Victoria’s Secret-type lingerie. Yet her own employment records prove that she was well above the age of consent when she claims these liaisons occurred— in the unlikely event they ever occurred at all.

There is one set of allegations that I know for certain was completely made up. She accused me of having sex with her on six occasions in different places, although I have never even met her. I was fortunate enough to have travel, cell phone and AmEx records that conclusively prove that I could not have been on Epstein’s Caribbean Island, New Mexico ranch, Palm Beach mansion or private airplane during the relevant time period. A careful review of these records led Giuffre’s own lawyer to conclude — in a lawfully recorded conversation— that it would have been impossible for me to have been where she falsely claimed to have had sex with me, and that his client’s accusations against me were “wrong,” “simply wrong.”

A thorough review of these records and other evidence also led the former head of the FBI to conclude that the allegations against me were disproved and false. Even Giuffre’s best friend said that Giuffre told her she had never accused me until she was “pressured” by her lawyers to do so. There are also sealed emails and a book manuscript written by Guiffre that conclusively prove I was falsely framed. Hopefully they will soon be unsealed.

So how did Pulitzer candidate Brown deal with all this evidence discrediting her primary source? She simply omitted any mention of it and presented Giuffre as an entirely credible witness with no doubts about her truthfulness.

In an email to her editor which she copied me (deliberately or inadvertently) she said that I had presented no evidence that “prove [my] innocence.” She discounted the findings of the former Federal Judge and FBI Director Louis Freeh with the following put down: “[Freeh] is a former Attorney General whose work has been questioned.” No, Freeh’s investigations have been relied on by universities, corporations and other institutions throughout the world. Brown didn’t even bother to call Freeh.

Brown deliberately and mendaciously misled her readers— and the Pulitzer Committee — by choosing to omit from her narrative every single document, sworn testimony and other proof that would raise questions about the credibility of her primary source. She admitted to me in a consensually recorded conversation that there is absolutely no evidence corroborating or supporting Giuffre’s accusation against me, but she did not publish that important fact. Nor did she publish the fact that Guiffre refused to accuse me on the record.

So shame on Brown. Shame on the Miami Herald. And shame on the Pulitzer Committee if it fails to investigate Brown’s reporting and encourages such fake news and shoddy journalism by rewarding it.

Alan M. Dershowitz is the Felix Frankfurter Professor of Law Emeritus at Harvard Law School and author of The Case against the Democratic House Impeaching Trump (Hot Books, January 2, 2019), and a Distinguished Senior Fellow of Gatestone Institute.