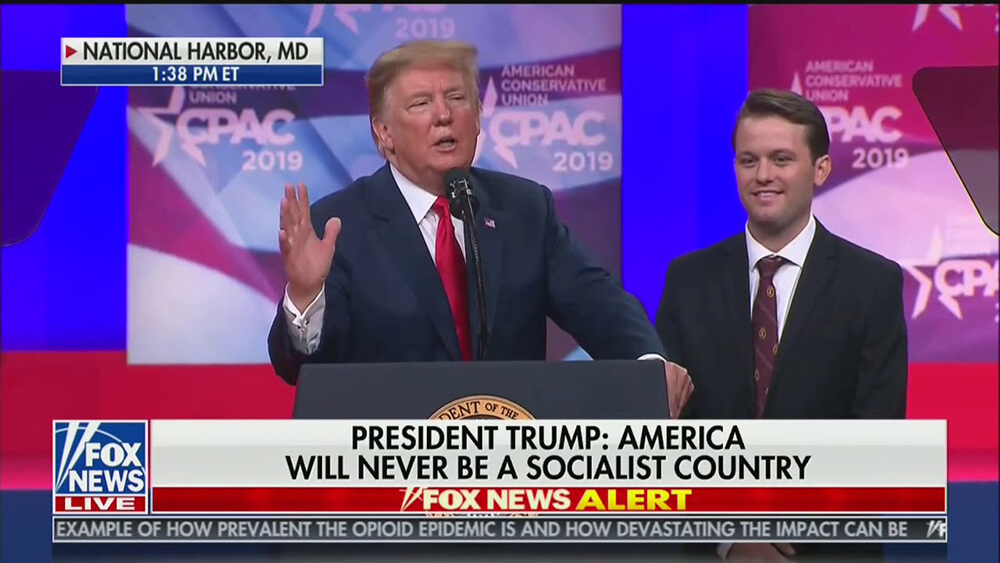 President Donald Trump brought a special guest with him to the Conservative Political Action Conference last week, where the president was the keynote speaker. The man, Hayden Williams, was working on behalf of the Leadership Institute and well within his First Amendment rights when he was confronted and allegedly attacked for his beliefs. Photo Credit: YouTube

President Donald Trump brought a special guest with him to the Conservative Political Action Conference last week, where the president was the keynote speaker. But the most powerful man in the world gave the spotlight to a conservative who was just trying to spread around information on a college campus about conservative group Turning Point USA’s meetings and other activities. The man, Hayden Williams, was working on behalf of the Leadership Institute and well within his First Amendment rights when he was confronted and allegedly attacked for his beliefs.

When the president heard about this altercation, he knew it was not only important enough to mention in his speech, but it was important enough for him to bring Williams, a 21-year-old campus recruiter, onstage with him, Recruiter reports.

“We reject oppressive speech codes, censorship, political correctness, and every other attempt by the hard left to stop people from challenging ridiculous and dangerous ideas,” Trump said. Not only did Trump mention the incident and bring Williams up with him onto the stage, but he declared that he would issue an executive order aimed at cracking down on what he sees as free speech limitations on college campuses that target conservatives and conservative groups.

The president got more specific by suggesting he could hold up federal funding for higher education institutions that don’t adhere the First Amendment guidelines. Trump is fighting for every conservative voice, and every American’s right to free speech and assembly. Trump used this point in his speech to pivot to how crackdowns on conservatives on college campuses personally affected Williams at the University of Berkeley.

“He took a hard punch in the face for all of us,” Trump said of Williams.

Campus police took Zachary Greenberg into custody last week because the police said he is one of the two assailants caught on camera from the violent incident, Newsweek reports. The compelling video footage is a stark reminder of how some conservatives are being intimidated into silence.

“UCPD will formally present the case to the Alameda County District Attorney’s Office for consideration of the filing of criminal charges,” campus spokesperson Diana Harvey said in a statement released about the arrest. “Once the matter is presented and reviewed by the District Attorney’s Office, additional information will be made available regarding a charging decision.”

Back in February when the attack initially happened, the campus police issued a statement that described what happened. “A physical confrontation ensued when one of the two men slapped the phone out of the victim’s hand,” the victim being Williams. “The suspect then knocked over the table the victim was at and the two men struggled over the phone. During the incident, the suspect punched the victim several times causing injury to the victim’s eye and nose.”

Fox News reports that during his speech, the president said that the nation needed to make sure to “never allow that to happen,” he said of the violence perpetrated against the young college conservative activist. “And here is, in closing with Hayden, here’s the good news. He’s going to be a wealthy young man,” Trump said, giving the young man a compliment that not many other people could brag about, a sign of affirmation from the president of the United States.

The president’s comments at CPAC give some better ideas of what the executive order entails.

“If they want our dollars, and we give it to them by the billions,” Trump started saying about public colleges receiving federal dollars, “they’ve got to allow people like Hayden and many other great young people and old people to speak.” The president said it all came down to one thing, “free speech. If they don’t, it will be costly. That will be signed soon,” he said last Saturday at the conference.