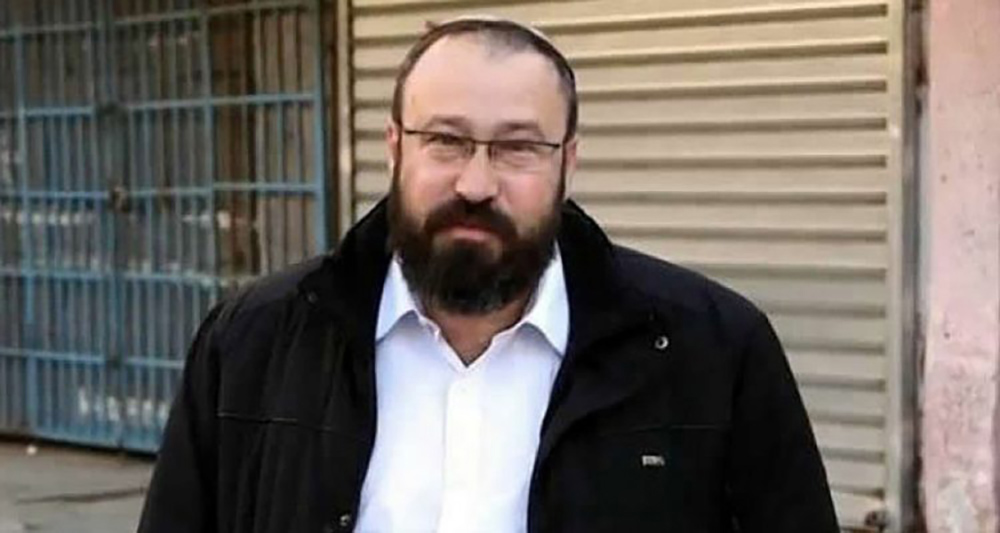 Rabbi Ettinger, a father of 12, perished from a head wound a day after the attack.

Rabbi Ahiad Ettinger is the second victim to die at the hands of the terrorist, who attacked IDF soldiers and civilians in Samaria on Sunday. 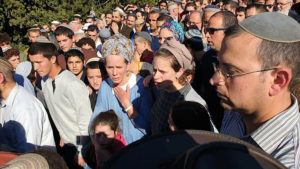 Rabbi Ettinger’s widow Tamar and some of her 12 children at the funeral of her husband. (INN)

Ettinger, 47, who was in his car at the Ariel junction during the attack, drew his weapon and was about to fire at the terrorist when he was struck in the head by bullets.

In a heroic act, the rabbi apparently turned back to the site of the shooting to try and stop the terrorist but was killed in the attempt.

A close friend of Ettinger told Ynet news, “In a split moment’s decision, he decided to turn around and return to the scene of the incident, drew his weapon and tried to neutralize the enemy. Unfortunately, the terrorist shot him first. He saw that a Jew was about to be hurt and he went to help. That’s what he did all his life.”

Ettinger leaves behind a wife and 12 children, ages one to 22. One child serves in an elite IDF unit, according to reports.

The Ettinger family, in announcing his death, thanked the staff of Beilinson hospital, the security people of Samaria and “all the people of Israel who prayed for his healing.” They said they will donate his organs to help others.

Prime Minister Benjamin Netanyahu said: “The people of Israel mourn today the murder of Rabbi Achad Ettinger, I wish to send condolences to his family at this difficult time.”

Rabbi Ettinger headed the “Oz and Emunah Yeshiva” in south Tel Aviv, an area facing distress due to the large number of African immigrants. His students gathered in the synagogue after the rabbi’s death and remembered him, Ynet reports.

“The rabbi gave his full attention to anyone who had a problem,” said one, according to Ynet. He “was modest and thoughtful, he wasn’t stubborn. He always knew how to hear other opinions, and he had the ability to strive for the truth.” 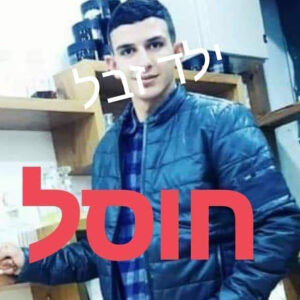 Omar Abu-Laila, 19, was killed in a shootout in the Arab village of Abwein, near Ramallah. IDF forces surrounded the house and when the suspect opened fire, he was shot dead by the Israeli troops.

Rabbi Ettinger lived in the town of Eli in Samaria.

Rabbi Schiller said, “We are all Mordechai the Jew, a Jew who withstands trials, falls, and gets up. A Jew is that one who cries out loudly and bitterly and is that one who stands, does not tremble or flinch, does not kneel or bow down.”

Education Minister Naftali Bennett eulogized Rabbi Achiad Ettinger, “In his lifetime, Rabbi Achiad gave up every moment of personal pleasure and strove to connect with the Jewish People and went to South Tel Aviv to grow Torah there and to create life there. In his death, Rabbi Achiad could easily have done what most people do and ignore it, but Rabbi Achiad strove to contact, fired shots at the intruder, and paid with his life. We’ve lost the present life of Rabbi Achiad, but his eternal heritage we’ll uphold forever.”

“It hurts; we shouldn’t have had to meet him here at the cemetery,” said Bennett. “Sheffi Paz, an activist from south Tel Aviv, said how much Rabbi Achiad’s Torah brought to southern Tel Aviv connection between the settlement and Tel Aviv,” added Bennett.

“It is true that we’re strong, that from every one of the twelve children will spring a tribe and you’ll continue the path of your holy father. True, the wonderful family here will wipe away the tears and continue because that’s what we are doing here. But this evil that cuts down the best people must be cut down. Over your grave I declare that Jewish blood will no longer be the cheapest commodity; we’ll cut off terror only after we break the cognitive and legal chains that prevent us from winning,” Bennett said.

“Tamar, dear family, the community of Eli, we’re with you, we’re strengthening you, the people of Israel are alive, may his memory be blessed.” Bennett closed his eulogy.

Yeshivat Kedumim head and rabbi of Rabbi Achiad Ettinger, Rabbi Yitzchak Ben Shachar, eulogized his student, “The devotion of Rabbi Achiad in his death continues the dedication in his life. He was always great. The same devotion continued in southern Tel Aviv, where he went on to study and teach, to head a yeshiva. Devotion to the nation, great devotion of Achiad and Tamar to the home they built, the education of the children, being considerate of their surroundings.

“We have no words to express the power of pain. We’re between Shabbat Zakhor and Purim, and this terrible murder was the day after Shabbat Zakhor and we received another reminder that the seed of Amalek must be wiped out. We must learn the lessons,” added Rav Ben Shachar.

Rabbi Ettinger, who served as Rosh Yeshiva of Yeshivat Oz and Emuna in the Neve Sha’anan neighborhood of south Tel Aviv, left his wife, Tamar (44) and 12 children.

The eldest daughter Moriah (21) is married to Yinon Luz, who lives in the renewed Jewish Quarter in Jerusalem and is expected to give birth soon. Efrat, 20, is a volunteer in the National Service in Tiberias. Eliashiv, 19, is serving in the IDF in an elite unit: Harel, 18, Eliasaf, 16, Yehuda, 13, Tehiya and Tzofia, twins, 11, Benia, 9, Eliav and Hadas twins.