WISHING YOU ALL A VERY HAPPY PURIM!!

We wish all of our readers here at the Jewish Voice and all Jews throughout the world a Chag Purim Sameach !!

May the joy of Purim be in your hearts the entire year through and may Hashem do unto Amalek ans he thought to do unto us!!

Did you know that even in the times of Moshiach, we will always observe Purim.

This holiday signifies our faith in Hashem and the fact that even the most heinous of decrees against the Jewish people can be turned around at a moment’s notice.

Let us always remember the lessons of Mordechai and Esther and rise up to save our people through prayer,

indomitable faith in the Master of the Universe and unbound love of our brothers and sisters!!

In the Story of Purim Haman cast lots to determine on which day of the year he intends to exterminate the Jews.
As the Scroll of Esther relates, Haman “cast a pur, which is a goral” (Esther 3:7), and decided on the thirteenth day of the month of Adar.
Both pur and goral mean “lottery,” but what is the difference between these two seemingly synonymous words? 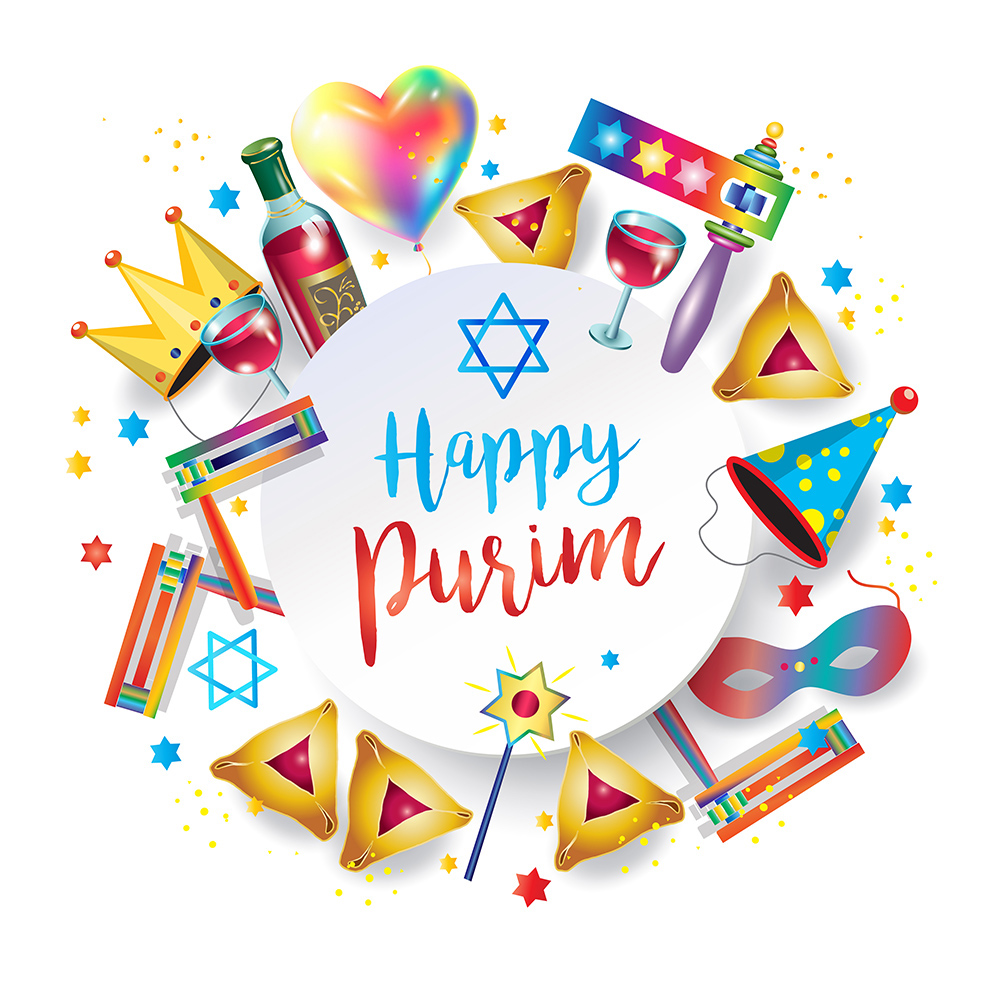 In the Story of Purim Haman cast lots to determine on which day of the year he intends to exterminate the Jews. As the Scroll of Esther relates, Haman “cast a pur, which is a goral” (Esther 3:7), and decided on the thirteenth day of the month of Adar

The Hebrew word goral is related to the Arabic word jaral/jarwal — “stones” or “pebbles” which were used for drawing lots. The goral comes up elsewhere in the Bible where it refers to the lottery used to determine which goat on Yom Kippur goes to G-d, and which to Azazel (Lev. 16:8). It also refers to the mechanism of lots by which the Holy Land was divided amongst the various tribes (Num. 26:55). A goral also refers to the portion allotted to somebody, oftentimes by way of a raffle or lottery. In fact, the English words lot and plot, which refer to sections of land, are probably derived from the word lottery.

Rabbi Yom Tov Tzahalon (1559-1638), also known as Maharitatz, explains that Haman presided over two lotteries: one was a goral to decide on which day he should speak to the Persian king about eliminating the Jews, and the other was a pur to decide on which day he should carry out his “final solution.” However, Rabbi Tzahalon does not explain why one of these is a pur and the other is a goral.

Rabbi Yaakov Lorberbaum of Lissa (1760-1832) explains that goral refers to a lottery held for beneficial purposes, while a pur refers to a lottery cast with maleficent intent. Pur is related to the phrase por hitporerah ha’aretz (Isa. 24:19), which refers to the “disintegration” and destruction of the land. Goral, on the other hand, has a positive connotation, and refers to receiving a portion, like a raffle. He further explains that the Scroll of Esther calls what Haman did a pur because of his malevolent intentions, but also emphasizes that it was a goral because from Haman’s perspective he had something to gain (i.e., the property of all the Jews he sought to kill).

Rabbi Tuviah ben Eliezer (Midrash Lekach Tov to Esther 3:7), Rashbam (to Ex. 16:15), Ibn Ezra (to Esther 3:7), and Nachmanides (to Ex. 12:2) all explain that the word puris Persian (Akkadian?), and the Scroll of Esther translated it into goral,which is Hebrew. Indeed, some linguists note that just as goral is related to “rocks” and “pebbles,” so too is pur derived from the Akkadian word puru, which means “stone”.

According to this understanding, both pur and goral mean the same thing, but one is Hebrew and one is Persian. Following this approach, Rabbi Yosef ben Yosef Ibn Nachmias (circa. early 14th century) notes that alhough the Scroll of Esther uses quite a few Persian words, it felt the need to translate the term pur into the Hebrew goral because the word pur is so central to the Purim story — after all, the holiday is named Purim after Haman’s pur (see Esther 10:26).

Rabbi Shlomo Pappenheim of Breslau (1740-1814) mentions and disagrees with the above-cited authorities who explain that the word pur is Persian, not Hebrew. He claims that pur is actually Hebrew, and is a derivative of the biliteral root PEH-REISH. That root, in Rabbi Pappenheim’s estimation, refers to the act of “breaking something down into smaller components.” Different words derived from this root include perurim (“crumbs”), efer (“ash”), parur (a special “pot” for cooking crumbs or other small grains), pri (a “fruit,” which is a microcosm of a tree that comes off the tree), pe’er/tiferet (a form of “all-encompassing beauty” which breaks down into multiple aspects), hafarah (the act of “disintegrating” or “nullifying” a vow), primah (the act of “tearing” clothing into multiple shreds), and tefirah (“sewing” i.e., the means of rectifying the damage done by primah).

In that spirit, Rabbi Pappenheim explains that pur (“lottery”) referred specifically to a box that resembled a parur,and into which one put little pieces of wood or stone for drawing lots. In Mishnaic Hebrew this sort of box is called a kalpi (Yoma 39a). The word kalpi, in turn, is derived from the Greek word kalpe/kalpis, which refers to an urn used for drawing lots. In Modern Hebrew the word kalpi refers to the “ballot box” used in governmental elections.

When the Mishna and Talmud refer to drawing lots the word commonly used is payis. Most prominently, a payis is held to determine which kohanim will actively partake in the Temple services (Yoma 2:2-4).

Some linguists argue that payis is derived from the Persian word pisa or the Greek word psefos, which mean “small rock” (such that it means the same thing as goraland pur). However, Rabbi Yom Tov Lipmann Heller (1578-1654) in Tosefot Yom Tov (to Shabbat 23:2) explains that the etymology of payis is Hebrew. He argues that it is related to the concept of piyus (“appeasement”), and explains the connection by noting that the randomness of a lottery serves to “appease” all parties involved because everyone has an equal chance of winning. A similar understanding was proposed by Rabbi Menachem Meiri (Beit HaBechirah to Yoma 22a), and even earlier by Rabbi Nosson of Rome in Sefer HaAruch, who wrote that payis is a type of lottery whose purpose is to “appease” all entrants. In Modern Hebrew the word payis refers to the nation-wide lotto whose name adorns many a buildings in Israel.

A lesser-known word for lottery is cholesh. The prophet Isaiah said that Nebuchadnezzar was cholesh the different nations (Isa. 14:12). The Talmud (Shabbat149b) explains that cholesh means “he drew lots,” as every day Nebuchadnezzar would use lots to determine which nation’s royalty he would victimize. Rabbi Shlomo HaAdani (a 16th century commentator to the Mishna) writes in Melechet Shlomo (Shabbat 23:2) that cholesh is related to lachash (“whisper”) because, he claims, lotteries are generally cast in the quiet. Alternatively, Rabbi Yosef Yishai Rain suggests that cholesh in the sense of “lottery” is related to its Hebrew homonym chalash (“weak”), because winning something in a raffle or lottery is considered a “weak” proof that he really deserves it.

I would like to conclude with a fascinating Midrash which summarizes some of what we have discussed. The Midrash (Yalkut Shimoni, Ex. §265 and Pesikta d’Rav Kahane §3:1) teaches that there are four terms in the Bible for “lots”: cholesh, pur, goral, and chevel. The Midrash asserts that all four of these terms will be used against the Sons of Eisav. The word cholesh is used when describing Yehoshua “weakening” (vayachalosh) the Amalekites, which brought the Jewish People to military victory (Ex. 17:13). The words pur and goral appear in the story of Purim in the Jews’ victory then. And in the future, the descendants of Eisav will be afflicted by a chevel (“portion” a synonym for goral), as the birthpangs of the Messianic arrival are called chevlei leidah (Hoshea 13:13).