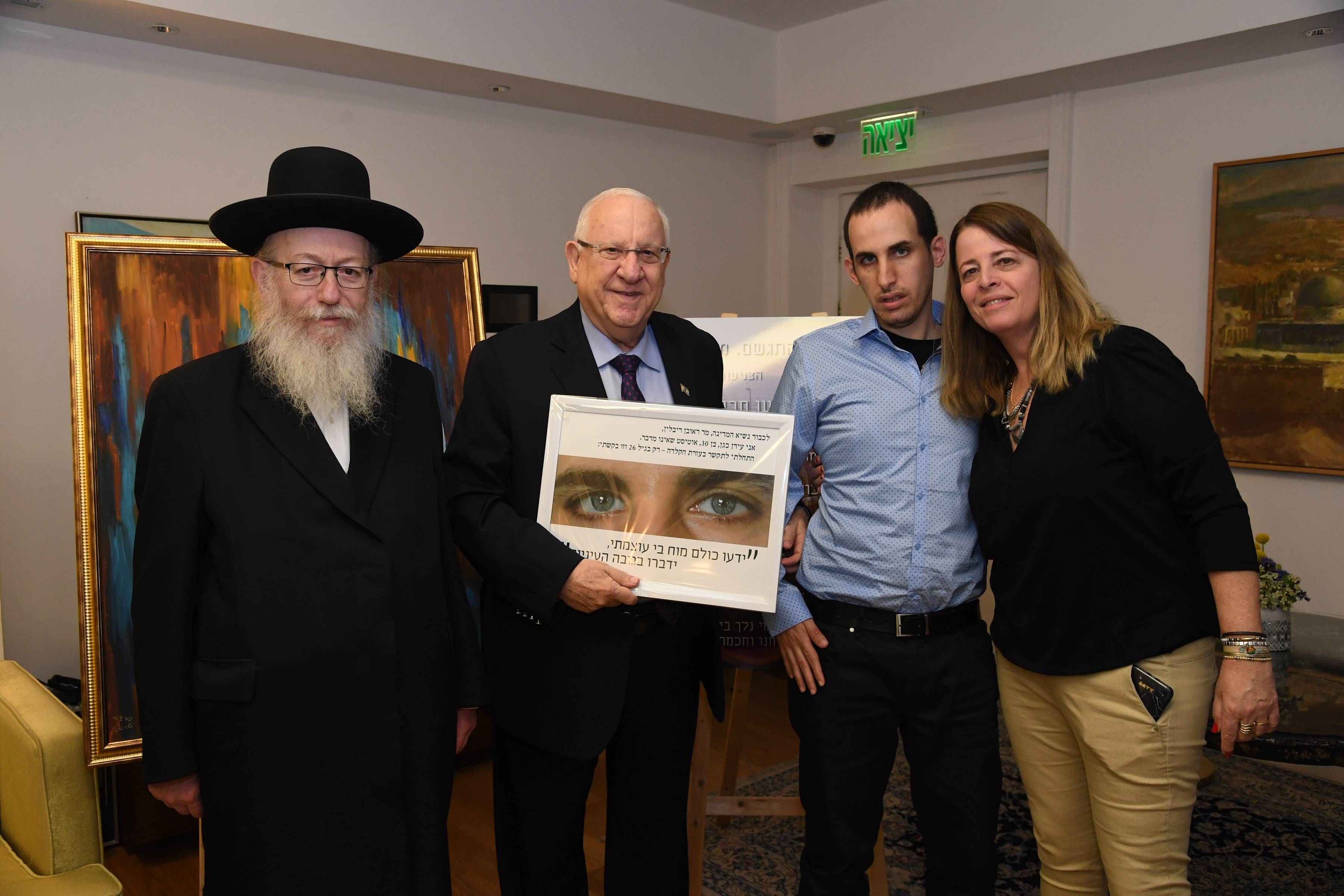 President Reuven (Ruvi) Rivlin on Sunday 24 March / 17 Adar II, hosted an event at Beit HaNasi for the first time to mark World Autism Awareness Day, which falls each year on April 2. Deputy Health Minister Yaakov Litzman, children and adults on the autism spectrum and representatives of various NGOs also participated in the event.

During the event, 11-year old Roi Mor, who was diagnosed as being on the autism spectrum at the age of a year and a half, performed an original composition called ‘Harmony’. Roi has exceptional musical talents and he composed this piece at the age of 10. There was also an exhibition of works by artists on the autism spectrum from three different shows: ‘A Bridge to the World’ at the ALUT center in Jerusalem; ‘Out of the Bubble – Autism: Not What You Thought’ by Tali Kagan, mother of Idan; and ‘In My Own Way’ by the artist Nevo Afek.

The president began by saying: “according to estimates, 25,000 Israelis are on what we now know to refer to as the autism spectrum. That means that every one of us knows someone, an adult or a child, who deals with autism. There is also a steady increase in those diagnosed each year. This rise requires the State of Israel and our society to promote treatment and support for those with autism and their families, from birth until old age.”

“Integration of children and adults with autism in society is a task of the highest priority which every one of us can and must engage with,” said the president, adding “and in order to do this, we must acknowledge first and foremost. We need to go beyond what is familiar and to try and meet these dear people who are hidden under the name ‘autism’. To want to do a little more for them, and certainly not to use that name as a term of abuse.”

The president concluded by saying “there is no shame in being autistic. It is not a sin. If we only know how to embrace with love, I have no doubt we will all benefit. In Israel, treatment of children and adults with autism and their families is a partnership between government ministries and NGOs. Working together, they continue to make progress.”

Deputy Minister of Health Yaakov Litzman MK: “World Autism Awareness Day is an expression of our commitment as a society to work for equality for those with autism and to relate to them in an appropriate and efficient way. I thank the President for his support for this important endeavor. Together, we will work for the welfare of those with autism in every way.”

Lihi Lapid, mother of Yaeli who is on the autistic spectrum, and an activist for children and adults with autism, who took part in the event, “In a world where many people do not listen and many people shout, there are those who fight to listen and those who fight to be heard, even when they have no voice. Today I am here, trying to explain in words – which are what my daughter does not have – what it means to be autistic. In a survey of parents, over 80% of them said that they would not want their child to be in a group with a child with special needs, and so I want to thank President Rivlin for opening up his house to send the message to all Israel to reach out to children and adults with autism. Not only not to be scared of them, but to help them find their place and succeed as much as they can within the community.”

Yoav Hefer, CEO of ALUT, the Israeli Society for Children and Adults with Autism: “I would like to thank President Rivlin and the Ministry of Health for holding this event for the first time at Beit HaNasi. From here, we call for the acceptance of the other, whoever they may be, for understanding and inclusion of people on the autistic spectrum, and putting the treatment of autism on the national agenda. After many years in which ALUT has worked for treatment of people with autism in Israel, and despite the many successes, there is still much work to be done.”