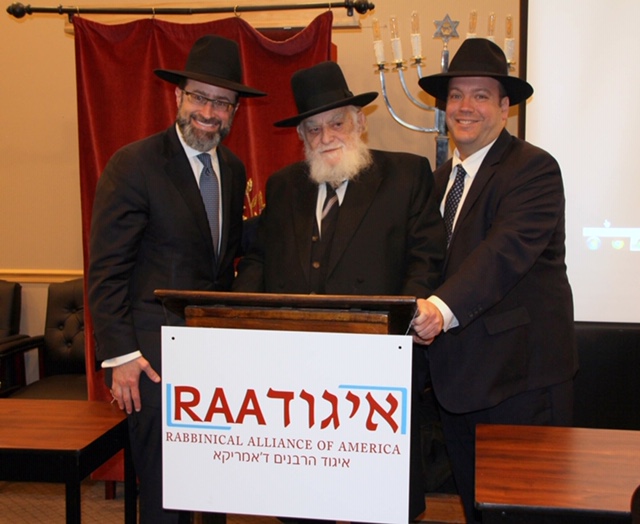 On the Sunday before Purim, over 80 rabbis met in the White Shul in Far Rockaway to discuss the important services provided by the Rabbinical Alliance of America — Igud HaRabbonim, particularly its prestigious beth din. Hosted by Rabbi Eytan Feiner, senior rabbi of Congregation Knesseth Israel of Far Rockaway, prominently known as the “White Shul”, and a prominent RAA/Igud member, the event brought together the organization’s national leadership and local rabbis to discuss areas of potential cooperation. Throughout the morning, speakers pointed out opportunities for local rabbis to benefit from RAA/Igud’s services and to contribute their own ample talents to the service of colleagues and communities across the country.

The Orthodox Jewish community in Far Rockaway began as a seed of committed members who, under brilliant and tireless leadership, built the area into a famously thriving Torah neighborhood. Significantly, Rabbi Ralph Pelcovitz, the longtime leader of the White Shul and somewhat of a father figure amongst Far Rockaway and 5 Towns rabbis, was a past President and a founding member of RAA/Igud. A partnership between Far Rockaway and 5 Towns rabbis and the RAA/Igud seems only natural, even a historical inevitability.

Rabbi Hershel Kurzrock, RAA/Igud’s Av Beth Din (senior judge), humbly pointed to his illustrious predecessors, joking that he was placed in charge because of his longevity. Among the dayanim (judges) with whom he served were Rabbi Yitzchak Isaac Liebes zt”l; The Keizmarker Rav, Rabbi Meir Greenberg zt”l; Rabbi Boruch Leizerowsky zt”l; Rabbi Pinchas Hirschprung zt”l and Rabbi Yisroel Belsky zt”l. Rabbi Kurzrock offered a brilliant Torah insight comparing at length a beth din with the Mishkan, the tabernacle in the desert. Later in the morning, Rabbi Chaim Komendant, the beth din’s Menahel (administrative judge) provided details on the beth din’s protocols, all of which are available on the beth din’s website. This accessibility and transparency highlights the beth din’s commitment to openness and integrity.

Rabbi Reuven Feinstein addressed the gathering via video. The eminent rosh yeshiva, Yeshiva of Staten Island, pointed to the need for a beth din that does not rush to judgment due to competing priorities. He noted that RAA/Igud’s beth din is composed of Torah scholars who listen to both sides impartially and patiently, exploring every angle before reaching judgment. Any community can reach out to the RAA/Igud beth din with confidence in expecting a comprehensive hearing of the subject and a faithful outcome.

Rabbi Yechezkel Moskowitz, grandson of the famous philanthropists in Israel, Irving and Cherna Moskowitz, and a lay leader in the National Council of Young Israel, provided an update on the political situation in Israel. Noting the miraculous growth of the Torah community in Israel, Rabbi Moskowitz urged people to vote in the World Zionist Organization elections to ensure that the organization’s ample charitable funds are distributed in a way that benefits the Torah community, rather than potentially the opposite.

What does a rabbi gain from membership in RAA/Igud? Rabbi Gil Student, director of the organization’s Halacha Commission, described the tax-beneficial retirement plan, the membership picture ID card, the rabbinic training opportunities, the mentoring program, the job search assistance, the Torah publication services, the growing Chaplaincy Commission and the opportunity to strengthen the voice of Torah in the public square. A member of RAA/Igud not only receives benefits but also shares his own knowledge, skills and experiences with younger colleagues, who seek mentorship and guidance in the difficult but rewarding professional calling of the rabbinate.

Rabbi Yehoshua S. Hecht, presidium chairman of RAA/Igud, and rav of Cong. Beth Israel Norwalk/Westport, CT, closed the formal remarks with a characteristically impassioned speech about the impact that the RAA/Igud has had on the Jewish community and will continue to serve as a voice for that which is al pi Torah – according to the dictates of Da’as Torah – our great Torah Sages. He issued a call for askanim – rabbis and lay leaders to join in support of the Igud as “Patrons of the Rabbinate.”

Rabbi Meir Melnick, a devoted member of the RAA/Igud and noted community leader offered a summation and stressed that the Igud is an organization with a clear message and a mission worthy of everyone’s support.

The comment heard from many Rabbonim attending was expressed quite aptly by The Slavita Rav, Rabbi Chaim Mordechai Katz, Rav of Kahal Bais Shmuel Abba of Far Rockaway: “This meeting filled a long awaited need in recognizing the importance of the Far Rockaway and Five Towns community.”