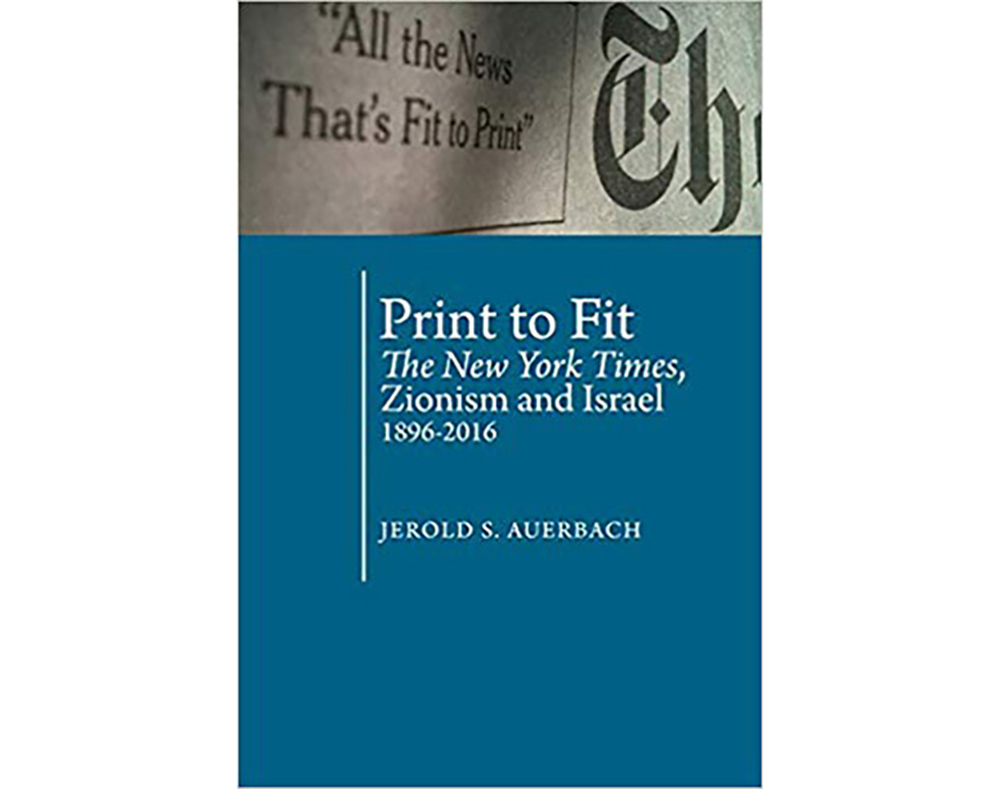 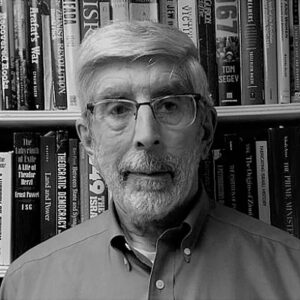 As Jerold Auerbach, professor emeritus of history at Wellesley College, tells the story of the Times from its late 19th century beginnings under the guidance of publisher Adolph S. Ochs of Tennessee up to the present day — a prodigious work of historical scholarship and critical analysis — the Times’ two abiding principles (almost dogmas) during this “Biblical” tenure of 120 years have been Reform Judaism and American patriotism.

It has long been a commonplace that The New York Times, America’s “newspaper of record,” which flaunts the motto “All the News that’s Fit to Print,” failed to report the two greatest mass crimes of the twentieth century: Nazi Germany’s destruction of European Jewry and the Soviet Union’s murder of millions of Ukrainians. As Jerold Auerbach, professor emeritus of history at Wellesley College, tells the story of the Times from its late 19th century beginnings under the guidance of publisher Adolph S. Ochs of Tennessee up to the present day — a prodigious work of historical scholarship and critical analysis — the Times’ two abiding principles (almost dogmas) during this “Biblical” tenure of 120 years have been Reform Judaism and American patriotism.

Both Ochs’ religious commitment and his unswerving America First loyalty were dogmatic and excluded sympathy with the Zionist movement. The two opposed forces came to prominence simultaneously: Theodor Herzl published The Jewish State: An Attempt at a Modern Solution of the Jewish Problem in 1897, just six months before Ochs purchased the Times, then in desperate financial straits. 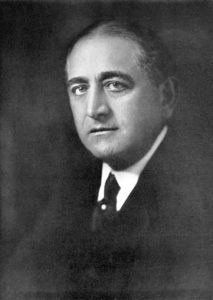 First publisher of the New York Times–Adolph S. Ochs. Rarely did Ochs and his newspaper come to the defense even of persecuted American Jews, and when they did they came to regret it. Photo Credit: Wikipedia

He aimed to make it not only a financial success but “a model American newspaper for fairness, cleanliness, independence, and enterprise.” Ochs was also determined to keep the Times from either appearing as or being a Jewish newspaper; and to this end he took such measures, whenever possible, as hiding writers’ Jewish names behind initials. Writers named Abraham had bylines only with the initial “A.” Not until 1976 would the Times have a Jewish editorial page editor, Max Frankel, who later confessed that he was “much more deeply devoted to Israel than I dared to assert.”

Ochs’ commitment to Reform Judaism, it should be noted, went very deep, and it entailed unrelenting opposition to Zionism or even to the notion of a Jewish people that transcended national boundaries. A Jew with American citizenship was in his view an American not only “first” but entirely and exclusively. He would provocatively ask American Zionists whether they would fight for America or for (a conjectural) Jewish state should the two countries go to war. He was a devout America Firster.

Rarely did Ochs and his newspaper come to the defense even of persecuted American Jews, and when they did they came to regret it. Lawyer Louis Marshall persuaded Ochs to rally the Times in defense of Leo Frank, framed in 1913 for the rape and murder of teenager Mary Phagan. But when a Georgia paper accused the Times of “Jewish propaganda,” Ochs vowed never again to support a public cause, “certainly not one involving Jews.” 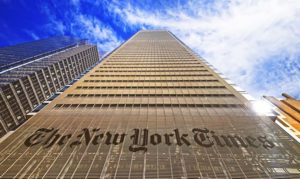 It has long been a commonplace that The New York Times, America’s “newspaper of record,” which flaunts the motto “All the News that’s Fit to Print,” failed to report the two greatest mass crimes of the twentieth century: Nazi Germany’s destruction of European Jewry and the Soviet Union’s murder of millions of Ukrainians. Photo Credit: INN

Auerbach shows how the Ochs-Sulzberger New York Times and the Reform Movement — led by anti-Zionist zealots like Judah Magnes and groups like the American Council for Judaism — formed a kind of interlocking directorate that turned a cold shoulder to Jews coming under Nazi rule. He demonstrates how the Times’ emphasis on “universalism” extended to concealment of Hitler’s destruction of European Jewry, by now the subject of Deborah Lipstadt’s Beyond Belief (1986) and Laurel Leff’s Buried By the Times (2005). Nor were the Nazis the sole beneficiaries of the Times‘ universalism. The paper’s Moscow bureau chief Walter Duranty depicted Soviet Odessa as a place “far more conducive to Russian Jewry than … Palestine itself.” (Duranty’s rank dishonesty is now better known for his apologetics on behalf of Stalin and the dictator’s decimation of the Ukrainians.)

Jews desperately needing rescue from Europe and escape to the United States or Palestine found no support from the Times. Reform Jews were largely content with an American president who would not even allow the pre-Hitler quotas for Jewish immigrants to be filled. The intensity of Reform Judaism’s Ochs-Sulzberger rejection of Jewish peoplehood makes it in Auerbach’s view the key not only to the Times’ past suppression of the truth about the destruction of European Jewry but also to its enduring anti-Zionist editorial advocacy and its unrelenting “Blame Israel First” principle of interpreting Israel’s constant burden of peril. 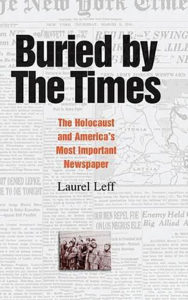 Auerbach demonstrates how the Times’ emphasis on “universalism” extended to concealment of Hitler’s destruction of European Jewry, by now the subject of Deborah Lipstadt’s Beyond Belief (1986) and Laurel Leff’s Buried By the Times (2005)

These themes, inevitably, overlap from chapter to chapter, but all chapters serve to demonstrate that the overwhelming majority of Times editors, columnists, and reporters have displayed — how should one put it? — a striking lack of compassion toward Jews. This harshness is enough to make one wonder why so many American Jews judge Judaism by Times standards rather than the Times by the standards of Judaism.

Chapters dealing with the interminable question of the disputed “territories” also have in common a logical absurdity, obvious yet barely mentioned in the paper. From 1948-67 the Arabs had complete, unfettered control of the territories, theirs to do with whatever they liked; and what they liked was not the creation of a new Palestinian state, but a convenient site from which to launch terrorist attacks against Israel. 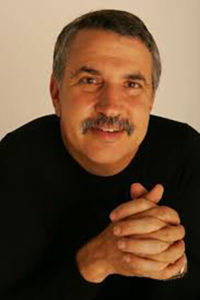 Thomas Friedman of the New York Times has been condemned by many for his clear antipathy towards Israel. Photo Credit: Facebook

Auerbach demonstrates how Anthony Lewis and Thomas Friedman, perhaps more consistently than all other Times regulars obsessed with Israel, have been addicted to a double standard in judging the adversaries in the Arab-Israeli conflict. They believe that the more unfairly Israel is treated by The New York Times, the better off it (and everybody else) will be. An irreverent reader of the paper long ago nominated Lewis for the Pete Rose Journalism Award in recognition of his having written 44 consecutive columns on the Arab-Israeli conflict that laid all blame for its continuation on the intransigence and brutality of the Jews, adding that even a Joe DiMaggio award (56 consecutive “hits” against Israel) might be insufficient recognition of consistency in depicting the Jewish state as a breeding ground for fanatics.

Lewis typically deplored Israeli actions not merely because they hurt Arabs. He deplored them because they “cannot serve the spirit of Israel, or its true security.” Like Brutus brooding over the misdeeds of his beloved Caesar, Lewis persuaded himself that “in the spirit of men there is no blood.” He was therefore not tremendously perturbed by the prospect that it may be difficult to come by Israel’s spirit without dismembering the Jewish state.

“Yes,” Lewis wrote, “there is a double standard. From its birth Israel asked to be judged as a light among nations.” Of course, this preposterous assertion reveals total ignorance of the Zionist movement, which rejected Jewish chosenness and sought to normalize Jewish existence as a member of the family of nations, treated neither better nor worse than others. Lewis’ formulation was sinister in suggesting that Israel has no right to exist unless and until it is perfect.

Thomas Friedman has been on the same track. In his book From Beirut to Jerusalem, he recounts a moment of revelation in London while reading the International Herald Tribune. The day’s paper had spread over four columns on its front page a photo of “an Israeli soldier not beating, not killing, but grabbing a Palestinian.” When he sought out the story behind the photo, he found only a two-paragraph item on page two. The rude blare on page one had blotted out, among other small troubles in the Islamic world, that day’s slaughter of several thousand people in the Iran-Iraq war.

What, Friedman wondered, explained this “lack of proportion?” His answer was that “this unique double dimension” is attributable to “the historical and religious movements to which Israel is connected in Western eyes.” So that’s the explanation of the relentless obsessive lashing of Israel by him and his colleagues at the Times and elsewhere? He continues: “What the West expected from the Jews of the past, it expects from Israel today.”

Of course, as Auerbach amply demonstrates in this remarkable and magisterial book, Friedman and Lewis and their like have not been telling the truth about Western expectations of the Jews. Here is a Philip Roth character, an ignorant lout to be sure, on this subject: “The fellows who say to you, ‘I expect more of the Jews,’ don’t believe them. They expect less. What they are really saying is, ‘Okay, we know you’re a bunch of ravenous bastards and given half the chance you’d eat up half the world. … We know all these things about you, and so we’re going to get you now. And how? Every time you make a move, we’re going to say, “But we expect more of Jews, Jews are supposed to behave better.”’… I would have thought that it was the non-Jews whose behavior could stand a little improvement.”

In slightly less colorful language, Auerbach’s study of the Times conveys a similar message, along with the recognition, generally absent from the paper, that the establishment of the State of Israel just a few years after the destruction of European Jewry was one of history’s great affirmations of life over death.

Edward Alexander is professor emeritus of English at University of Washington. His most recent book is Jews Against Themselves.