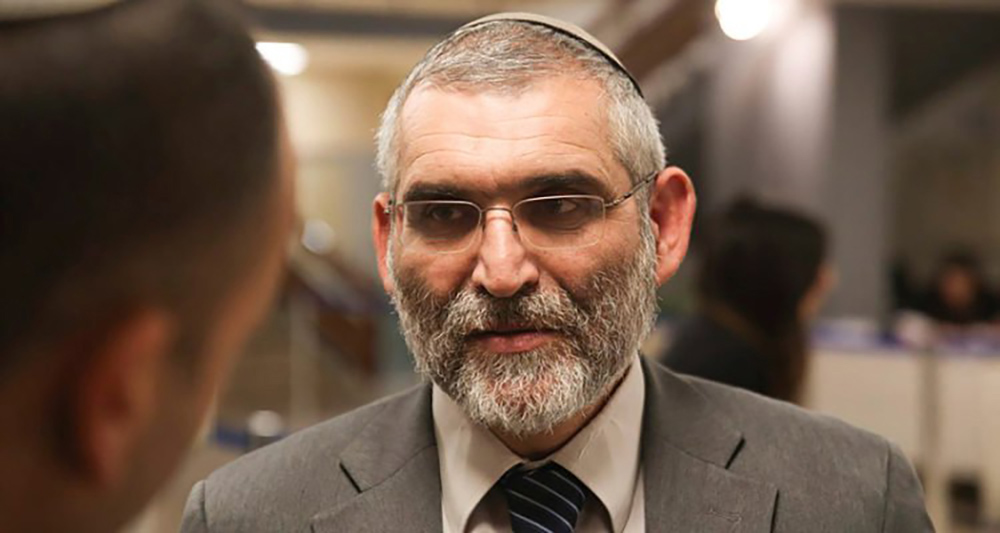 Michael Ben Ari from the Otzma Yehudit Party is facing elimination from the elections due to his political views. (Flash90/Yonatan Sindel)

“It’s the last straw for the High Court’s justices,” Justice Minister Ayelet Shaked declared, calling their decision a “massive and mistaken intervention going to the heart of Israeli democracy.”

Leaders of the political right wing in Israel on Monday sharply condemned the High Court’s decision to ban Michael Ben-Ari of the nationalist Otzma Yehudit (Jewish Strength) party from running for Knesset in the upcoming elections.

The 8-1 ruling disqualified Ben-Ari on the basis of his alleged incitement to racism against Arabs. One of the focal points in the debate before the ruling, for example, was his public statements questioning Arab citizens’ loyalty to the State of Israel.

“The High Court crossed a red line this evening,” he tweeted. “They disqualified a man whose two sons serve in the IDF and authorized a party that backs terrorists [the Balad-United Arab List]. The judges have not left us any choice but to act, and strongly.”

His party co-leader, Justice Minister Ayelet Shaked, agreed, charging that the court had no business intervening in a decision made by the Knesset, which represents the will of the voters.

“It’s the last straw for the High Court’s justices,” she said. “They have changed themselves into political actors. The High Court’s decision…is a massive and mistaken intervention going to the heart of Israeli democracy,” since they overrode the vote of the Central Elections Committee that allowed Ben-Ari to run.

This is the first time that a Knesset candidate has been banned by the court from running after the Central Elections Committee had backed his right to do so.

National Union Chairman MK Bezalel Smotrich of the Union of Right-Wing Parties (URP) called a Knesset meeting on Monday to cancel the legal clause upon which the decision was based, considering that it was ignored when it came to the petition regarding the Arab parties.

“The Supreme Court justices disqualified a candidate due to his views regarding Israel’s enemies but approved parties which openly identify with Israel’s enemies. This distortion of justice must be corrected today,” he stated.

He went even further in a letter he sent to Prime Minister Benjamin Netanyahu and other top political leaders.

The ruling “places Israel together with countries such as Iran, which have a council of wise men that is authorized to decide, instead of the voters, who may and may not be chosen for parliament,” he wrote.

On the other side of the political aisle, however, there was great satisfaction with the ruling.

“I congratulate the High Court on its decision not to allow Michael Ben-Ari to run….There is no room for inciting and dark racists in Israel’s Knesset,” tweeted Labor leader Avi Gabbay.

“Bibi brought him in and Meretz took him out,” she posted on her Twitter account. “Meretz’s petition rejected Netanyahu’s corrupt and racist package deal with the Kahanists.”

Both Ben-Ari and his Otzma co-leader, Itamar Ben-Gvir, were followers of the late Rabbi Meir Kahane, who was also disqualified from running for Knesset in 1988 on the basis of alleged racism against Arabs. Ben-Gvir, however, is being allowed to stand for Otzma this time around.

Ben-Ari has served in the Knesset, representing the National Union party from 2009 to 2012.