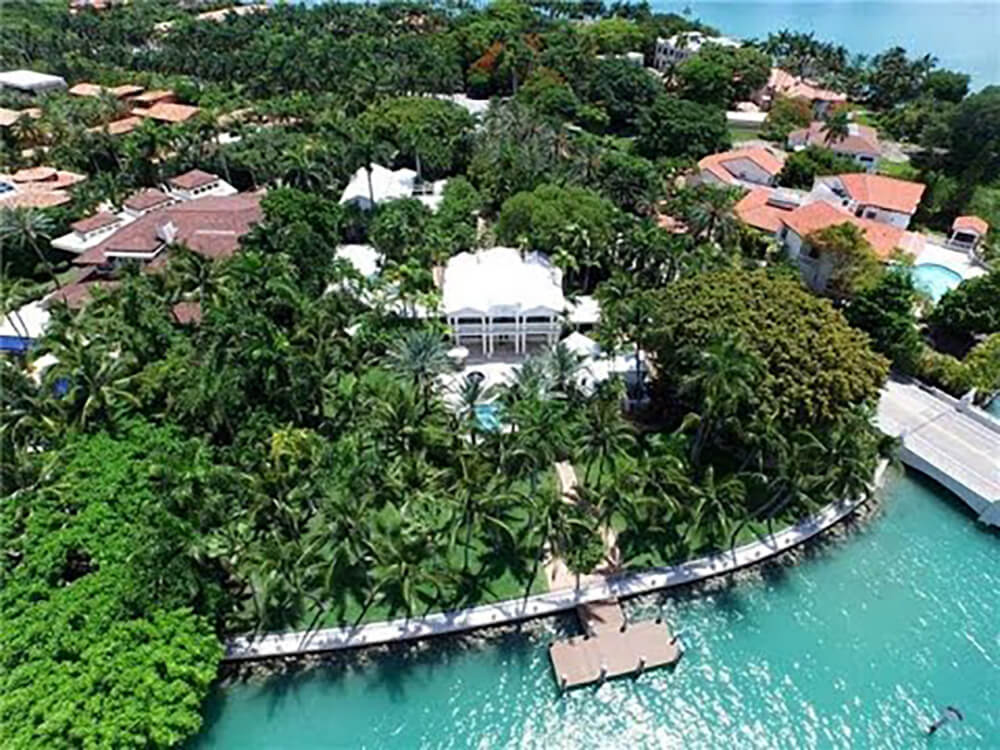 Entertainers Gloria and Emilio Estefan have cut the sale price of their Star Island (Miami) guest house property – which has not been on the market since 2017 — from $40 million to a paltry $32 million. Photo Credit: YouTube

Entertainers Gloria and Emilio Estefan have cut the sale price of their Star Island (Miami) guest house property – which has not been on the market since 2017 — from $40 million to a paltry $32 million.

The property boasts a great view of downtown Miami, as well as a laundry list of showbiz guests, such as Jennifer Lopez, Cher and Ricky Martin.

According to the Wall Street Journal, the waterfront property also offers a 5,000 square foot main house; five bedrooms; a bathroom; a pool; and a three-bedroom villa on the grounds. “The main home has a whitewashed facade, hardwood and marble floors, 30-foot ceilings, open verandas and arched doorways.”

Forbes took a whack at describing the property’s world-class opulence, noting that “The man made Star Island in Miami’s Biscayne Bay is appropriately named given all the celebrities that have been known to live there. Gloria and Emilio Estefan, of Miami Sound Machine fame, are just two of them (other big names include Rosie O’Donnell, Sean “Diddy” Combs and Shaquille O’Neal).

“The Estefan clan has decided to list an 8,000 square foot home adjacent to their primary house that had previously been the residence for Emilio’s mother,” Forbes continued. “After first bringing the 5-bed, 4.5 bathroom to market in 2017 for $40 million, as the Wall Street Journal reported, they have returned it to the multiple listing service for $32 million. The 1.2 acre property has 240 feet of water frontage and includes a 3-bed, 3-bath guest house. In case someone loves the location but doesn’t like the look of the house, the Estefans brought on Uruguayan architect Carlos Ott to design plans for a completely new contemporary style house.”

Gloria Estefan, born Gloria María Milagrosa Fajardo, is a celebrated Cuban-American singer, songwriter, actress, and businesswoman. She started her career as the lead singer in the group “Miami Latin Boys”, which later became known as Miami Sound Machine. She experienced worldwide success with “Conga” in 1985. The song became Estefan’s signature song and led to the Miami Sound Machine winning the grand prix in the 15th annual Tokyo Music Festival in 1986. In the middle of 1988, she and the band got their first number-one hit for the song “Anything for You.”