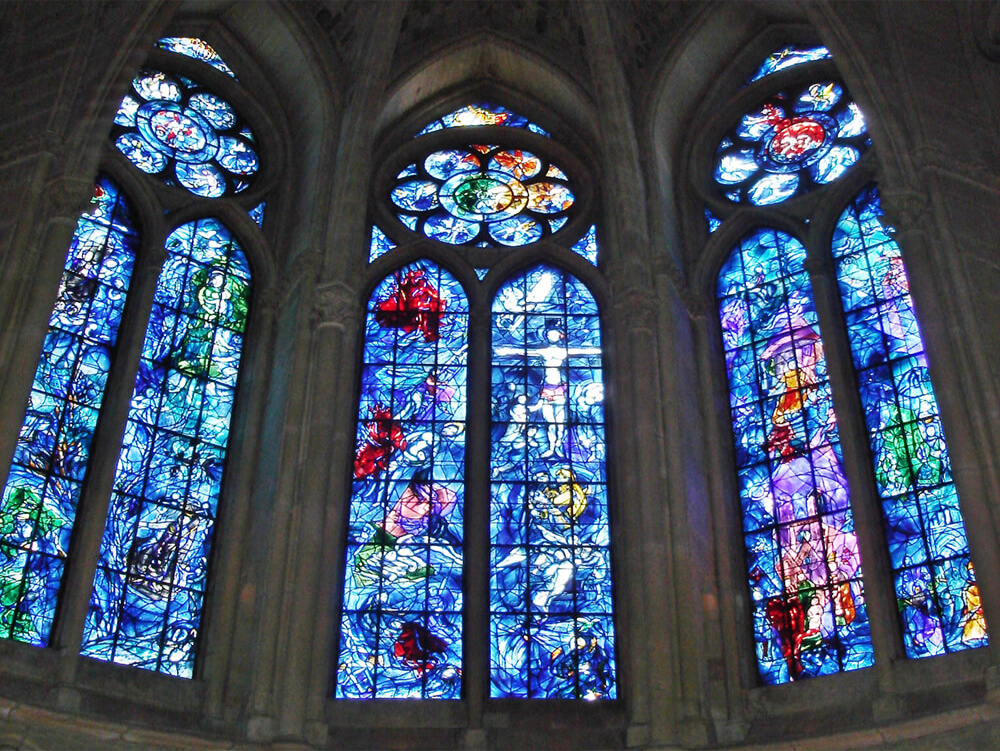 The abundance of Marc Chagall’s work in New York City, where I live, inspired me to see more of his genius abroad. So I headed to France on my very own Chagall trail.

Here in New York, Chagall’s work is readily accessible at the Metropolitan Opera House, at the Museum of Modern Art, and at galleries and at the Jewish Museum. Just 30 miles outside the city there are nine of his stained glass windows in the Union Church in Pocantico Hills. And there is great excitement for the exhibit “Chagall: Love, War and Exile,” which opens at the Jewish Museum of New York in September. 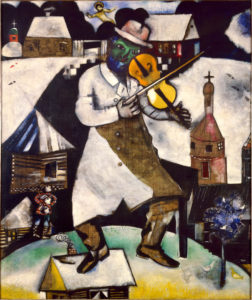 Energized by all of this, in April I organized a Chagall-centric itinerary from Paris to Nice, and viewed paintings, stage sets, etchings, mosaics, stained-glass windows, lithographs and murals in numerous venues.

Art historians label the Belarus-born artist’s work Cubism, Symbolism and Fauvism; some speak of Expressionism. I think of color and sensitivity, as much for suffering as for love.

Observing his life’s endeavor added to my understanding of 20th-century Jewish life as much as to my personal pleasure.

In Paris, le Palais Garnier, the Opera House, is home to a glittering gold and red Chagall ceiling and the Museum of Jewish Art, in Montmartre, displays a selection of lithographs. The Centre Pompidou displays dozens of works from his youth in Vitebsk, where he was born in 1887, through the 1960s in the south of France, where he died in 1985. This national museum is in the fourth arrondissement near the Marais, the now-trendy neighborhood that was once home to the largest Jewish population in Europe. Its narrow, cobblestone alleyways, distinctive architecture and synagogues retain a strong Jewish presence, and on rue de Rosier kosher restaurants serve everything from fine steaks to falafels.

From the Centre Pompidou’s rooftop terrace, there’s a clear view of Notre Dame. One of two female figures on the façade, Synagoga, represents Judaism as symbolized by the broken tablets with the Ten Commandments. Behind Notre Dame, where the Ile de la Cite comes to a point in the Seine River, the moving Memorial de la Deportation is dedicated to the 200,000 deported during World War Two. 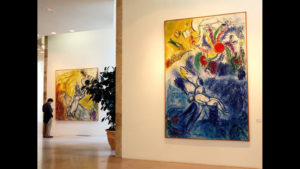 To see more art, I traveled to Nice by train, taking the high-speed TGV that glides between metropolitan areas at about 200 miles per hour, and stopped at Lyon and Marseille.

I explored Marseille—European Capital of Culture 2013 and home to a large Jewish community—by bus, before heading 19 miles north to Aix-en-Provence to see the Atelier Cezanne, Musée Granet and Fondation Vasarely. From Marseille’s new Gare St Charles, the TGV to Nice takes two-and-a-half hours along the scenic coast (reserved seats on the upper level facing the destination have the best view).

Nice is home to a vibrant Jewish community and The Musée National Marc Chagall with the most splendid and comprehensive of all Chagall collections. It stars 17 biblical paintings, brightly colored canvases dedicated to his wife, sculptures, brilliant stained-glass windows, mosaics, tapestries, sketches, prints and lithographs. It’s an emotionally powerful visit, and though the glorious Matisse museum is in the same Cimiez hillsides, I recommend that, if at all possible, visitors don’t try to cram both into the same day.

It takes about a half hour to drive up the hillside from Nice to reach Saint Paul de Vence, where Chagall chose to spend his last years. Across from the ancient walled fortification, a tourist Mecca with narrow, cobblestone pedestrian streets is the sprawling Fondation Maeght. Chagall mosaics decorate the architecturally stunning, park-like spot, as does work by Calder, Giacometti, Modigliani and Miró. La Chapelle de la Rosaire, an incredible jewel better known as the Matisse Chapel, is just three miles up the mountain in Vence.

Chagall is not the only artist who makes my spirit soar and I also visited the Musée d’Orsay and l’Orangerie, in Paris, to the Musée de l’Annonciade (Saint Tropez), to Musée Matisse and Musée Picasso (Antibes) on this trip. Yet, no others compare to him for his love of color, life, relationships and, primarily, for his love of his Jewish heritage.

Irvina Lew, a member of the American Society of Journalists and Authors and Society of American Travel Writers, writes about France, art and history. Follow her work at www.irvinalew.com.