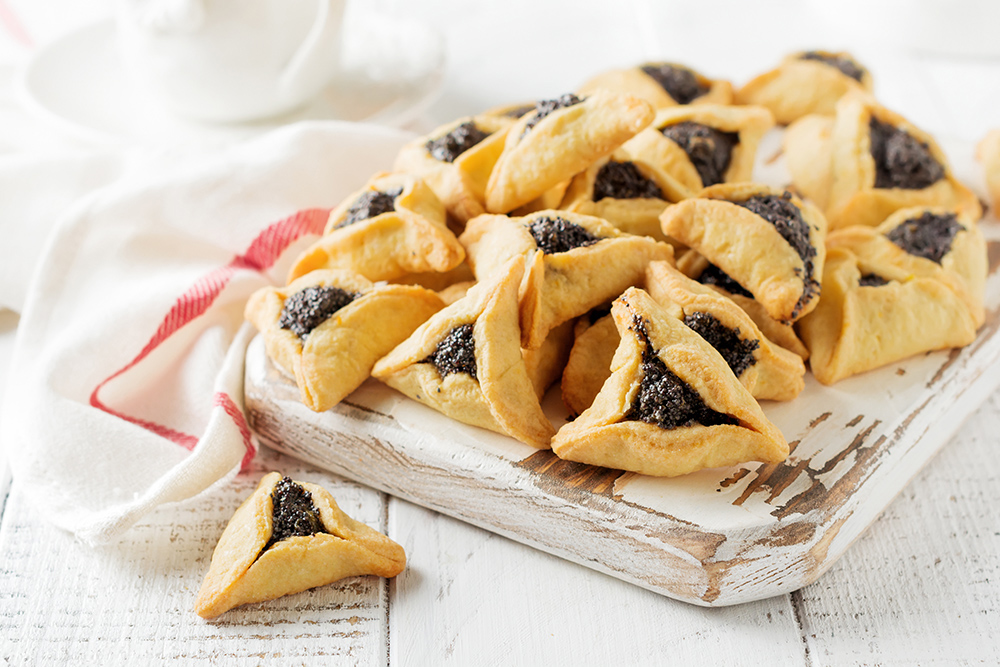 The author writes: “Don’t worry, I will not go completely without a supply of fresh hamentashen, which is as superior to the boxed variety as bubbie’s receipe for gefilte fish is unto the jarred.” Photo Credit: Shutterstock

This morning, over a bowl of warmish oatmeal, I read that Moishe’s Bakery on Second Avenue, the last distinctly Jewish storefront on what had once been the Yiddish Broadway, had closed. Not that the timing for such a sad departure could ever be actually good, but this is just prior to Purim, and Moishe’s hamentashen were the best in the Lower East Side. Crawling into my mind’s eye, I see them: big and beefy, never unduly doughy or sloppy with jam, with the right balance between tenderness and crumbiness – like life itself. If at all possible, a reprieve until Pesach, approaching exactly a month after, would have been better for the community, as a bakery on Passover is, for Jews, as superfluous as someone “selling ice in the winter.”

Don’t worry, I will not go completely without a supply of fresh hamentashen, which is as superior to the boxed variety as bubbie’s receipe for gefilte fish is unto the jarred. As Walter Benjamin famously illustrated, the handmade work of art throbs with life absent from its robotic simulation, so too with food. Even with the closing of Moishe’s Bakery on Second Avenue, there remains a kosher bakery – also named Moishe’s – offering this tasty morsel on Grand Street, now the very last purveyor of Jewish confection in this historic neighborhood. One hundred years ago, the two square miles of the Lower East Side housed more Jews than any other place on the planet, and where there were Jews, there were bakeries–by the dozen.

Over the past thirty years, we have lost Gertel’s, The East Broadway Bakery, Honey and Spice, and Ratner’s, which, in addition to its grandeur as a dairy restaurant, also featured an array of danishes, rugalach, black and white cookies, and hamentashen in its store window and in a showcase. Grand Dairy, a diner with an assortment of baked goods, and the iconic Garden Cafeteria before it, also once served cookies and cakes to writers and garden-variety nebbishes daydreaming and debating over “a glaz tey.” Now without Moishe’s of Second Avenue, the quintessential Yiddishe ghetto in America shrinks yet more.

The sad fact is that Moishe’s Bakery on Grand Street was supplied by its late Second Avenue namesake, as the two were owned by Moishe Perlmutter. (Yes, Moishe’s Bakery is literally Moishe’s bakery.) So, this closing also means that the remaining location will need to be sourced from outside the neighborhood. Located in the very pupik of the Amalgamated Building, a live-in Art Deco monument celebrating victory over the “sweatshops” of exploited Jewish labor, this Moishe’s is a still vital spindle in the social gears of the small – and yet smaller – Jewish zone. Sawdust on the floor, sheitls on the women, and Yaacov Perlmutter, Moishe’s Satmar nephew, greet you as you enter. A heimishe hangout for some of the neighborhood characters, Moishe’s has a few chairs and some coffee readily available for those who want some kibbitz with their afternoon nosh.

And since when is a cookie just a cookie? Marcel Proust launched into thousands of pages of reminiscences, delimited only by his untimely slide into the grave at the age of 51, while recalling “a bit of madeleine dunked in a linden-flower tea,” the floodgates of memory opening a tidal torrent at the hint of its soggy satisfactions. I have read that smell is our most evocative sense, but I imagine taste to be as profound, since smell and taste are substantially intertwined. In this way, food can bring us closer to people long since lost to this time and/or space: mothers and grandmothers, uncles, lovers, and others. As we learn in the Bavli Talmud: “food draws near the distant.” (Sanhedrin, 103b) And, as Jews, we are constantly reminded of the spirituality of eating itself. We make bruchas before and after eating, and we have six fasts – the Fast of Gedalia, Yom Kippur, Tenth of Teves, Fast of Esther, seventeen of Tamuz, and the ninth of Av. We even have a whole holiday – Passover – whose food obsession is only surpassed by its yearning for justice and its thankfulness to Hashem.

With so many of the actual Jewish restaurants of the neighborhood now extinct, I am surprised that deep-pocketed entrepreneurs have not (yet?) stepped forward to offer ersatz versions of Jewish standards. As shiva notices continue to materialize in the lobbies of our buildings, there are yet fewer of us to tell our stories each year. Will the Lower East Side become a Disneyland of Jewsploitation, like Poland, whose Jew-fests and Jew-themed restaurants offer the Jewish experience as a form of kitsch, or will we be erased entirely from the historical record? Will our shuls become condos for yuppies or will they simply be razed for gleaming glass towers? Will Jewish identity be claimed by some even as it is abandoned by others?

So, what’s a taste of Purim on the Lower East Side in 2019? Purim is a Mardi Gras of fasting and feasting, drinking and singing, costume and recalling a time of grave danger. At a moment when some politicians don masks of Jewish identity to cloak their hostile actions, Moishe’s hamentashen remain sweet nevertheless. With this cookie, now dissolving in my mouth, I pray that the hidden hand of Hashem will soon dispatch a new Esther and Mordecai to unmask and defeat those against us.

Yehuda Wengrofsky is Editor-at-Large at The Rohr Jewish Learning Institute. He still noshes, davens, learns, and scribbles in the Lower East Side of New York.