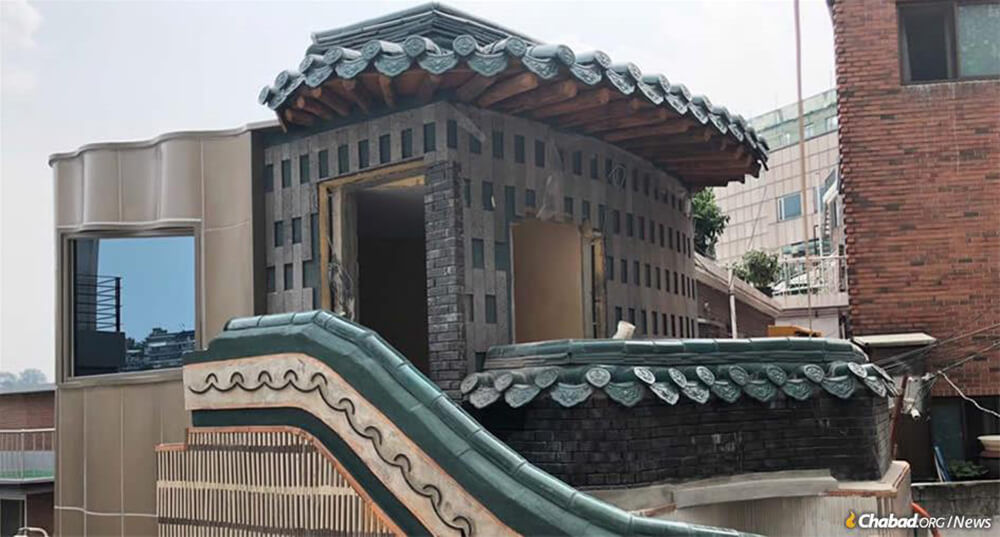 Binah Messinger was faced with a unique challenge when her husband, Capt. Joseph Messinger, a U.S. Army chaplain, was stationed in South Korea. 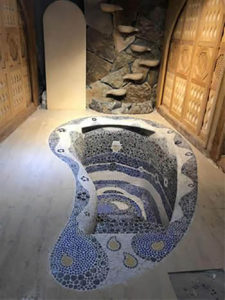 The community mikvah is designed to be aesthetically pleasing, in keeping with the natural themes of Asia

With no ritual bath or mikvah on the Korean peninsula, observing the laws of taharat hamishpachah, or Jewish family purity, required some time, expense, and, when necessary, a little maneuvering.

“You could go to Japan or China to a mivkah there, and that’s a whole ordeal,” said Messinger. “I went to Japan one time after my daughter was born, and it took me 22 hours round trip. I didn’t want to go to China because that was even more complicated and came with a visa issue.”

Of course, using the waters of a nearby beach was a possibility, (with someone there to ensure that her tevillah [immersion] was complete), but that required waiting until very late when the beaches in Korea were empty.

Other women she knew went with Chabad-Lubavitch emissary Mussy Litzman to the ocean about 90 minutes from Seoul. But with the military base two hours away without traffic, that, too, wasn’t an ideal solution.

Women who choose to fly overseas have to deal with last-minute flights since they can’t always time in advance when they will need the use of a mikvah. That can translate into paying prime ticket rates and scrambling to arrange child care—all for the effort of trying to observe what is one of Judaism’s most private and important mitzvahs. 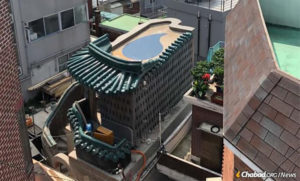 A bird’s eye view of a uniquely designed mikvah building.

To help make the observance of family purity easier and strengthen their admittedly transient community, Litzman and her husband, Rabbi Osher Litzman, co-directors of Chabad of Korea, are building South Korea’s first-ever mikvah. To do so, the couple have become de facto designers, making sure that the community mikvah is aesthetically pleasing, in keeping with the natural themes of Asia.

“We wanted to have a mikvah that every woman would be happy to use,” said Mussy Litzman. “We didn’t skimp on any efforts to make that happen. If we were building a mikvah for people to use, why not make it the best possible?

“Thank G‑d, the feedback is unbelievable, and we haven’t even finished it yet.” The mikvah is expected to open in about six weeks.

‘Every Time We Explain Something, They Appreciate Our Project More’

At any given time, several hundred Jews call South Korea home. This number includes educators, U.S. Army personnel and their families, students, diplomats, tourists and business people from around the world, mostly the U.S. and Israel. 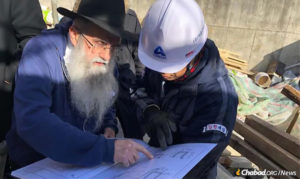 Indoor mikvahs must meet exacting standards, and rabbinic experts participated in the planning, design and construction

According to Osher Litzman, the couple has been planning for a mikvah since they first arrived in South Korea 10 years ago. “This was the first thing we wanted to do, and we didn’t buy a single item we could manage without so we could save money” for it, he explained, noting that they still use the same Lifetime tables they bought at Costco before their move to Korea.

That doesn’t mean they have skimped on programming. The couple runs a kindergarten, a kosher store and restaurant, as well as a Jewish library and Judaica store.

Creating a mikvah, however, demanded some thinking outside the box. Neither of the Litzmans are interior designers, yet they conceived of the mikvah’s unique raindrop layout, rather than the traditional square pool of water.

“Personally, I like rounded lines rather than square,” said the rabbi. “We developed the idea of connecting the mikvah with its main characteristic, which is water; hence, the shape: a drop of water. The building itself is a combination of royal Korean style on one side and modern waved aluminum panels on the other.” 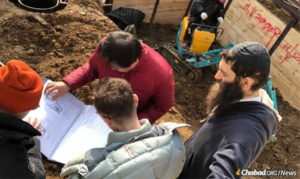 Indoor mikvahs must meet exacting standards, and rabbinic experts participated in the planning, design and construction

To improve access to the mikvah, which is located on a hill, the Litzmans paid to replace the neighborhood’s concrete stairs and put up handrails. They also had to educate the local government about why they needed the facility in the first place.

“They asked why we are digging a basement, which is not [normally] part of local zoning. We explained that the mikvah is quite deep and showed them pictures of other ones,” said the rabbi. “It is a process. Yet every time we have to explain something else, they appreciate our project more.”

The Litzmans hope to open the mikvah in about six weeks. The project is expected to cost an estimated $800,000, or maybe a bit less. To raise the needed funds, the Litzmans are running a “buy a tile” campaign for the mikvah’s construction. Their goal is to have 444 donors. To date, some 350 people have donated more than $500,000 towards the project.

“Some people think because we are in Asia, it’s cheap to build, but the real estate here is the most expensive in the world; it’s like Manhattan,” said Litzman. Added to the cost are Korean laborers who are involved in the construction. 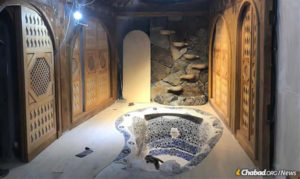 Creating a mikvah demanded some thinking outside the box. Neither of the Litzmans are interior designers, yet they conceived of the mikvah’s unique raindrop layout, rather than the traditional square pool of water.

Even without the remaining funds, construction is ongoing, and some, like Noa, a young mother living in Seoul with her family, are eager to see it completed.

“The mikvah is amazing,” she said via email. “I didn’t believe and couldn’t imagine such a beautiful and creative design. This is so inviting!”

And although she no longer lives in South Korea, Binah Messinger (now stationed in Columbia, S.C.) believes that the development will boost Jewish life for the local and visiting community, saying “this will make it so much easier” for U.S. military personnel and everyone living there or passing through.