Wife of NY Yankees President Flies to Israel to show support; challenges fans, players, and executives to support Lone Soldiers from their communities

Nefesh B’Nefesh and Friends of the Israel Defense Forces (FIDF) hosted its 6th annual “Yom Siddurim” (personal errands day) for Lone Soldiers this past Thursday at Beit HaChayal in Tel Aviv. The Errands Day, in cooperation with the Ministry of Aliyah and Integration, Ministry of Interior, The Jewish Agency, Keren Kayemeth LeIsrael, the Jewish National Fund-USA and with the assistance of Yahad, brought together all of the essential civilian agencies whose services are needed by Lone Soldiers in order to streamline the soldiers’ efforts to take care of their logistical tasks. 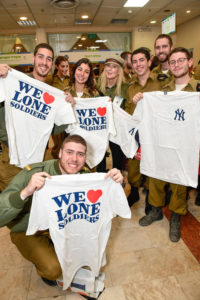 Organized together with the IDF Human Resources Department, Yom Siddurim acts as a one-stop-shop for Lone Soldiers to complete a wide range of errands, so that they can spend their days off from the Army relaxing rather than attempting to navigate the often-challenging Israeli bureaucracy.

From driving tests administered on site, to tax consultation, passport and ID assistance, and even an employment workshop, Lone Soldiers also had the opportunity to receive one-on-one personal consultation from Nefesh B’Nefesh and FIDF on acclimating into post-Army life in Israel.

Taking care of errands wasn’t the only highlight of the day. As part of an ongoing relationship between New York Yankees President Randy Levine, his wife Mindy, and Nefesh B’Nefesh, a special delivery shipment was sent from New York to Israel of hats, shirts and bandanas–all branded with the slogan “We Love Lone Soldiers”. These inspirational items were distributed by Mindy Levine, wife of NY Yankees President Randy Levine, who flew to Israel with the sole purpose of personally delivering the merchandise and speaking with as many Lone Soldiers as possible because she holds them close to her heart and wants to hear about their needs and experiences as Lone Soldiers in the IDF.

“Randy and I are adamant about supporting these courageous young women and men who have chosen to make Israel their new home and have then gone on to volunteer to serve in the Israel Defense Forces to protect that home,” explained Mindy Levine wife of NY Yankees President, Randy Levine. “I hope that after learning about Nefesh B’Nefesh through our support of the Nefesh B’Nefesh-Friends of the IDF (FIDF) Lone Soldier Program more sports executives, players and organizations will find it in their hearts to support Lone Soldiers from the states their teams represent. I am offering a challenge to fans of all teams to join us as well in an effort to show these soldiers that they are not alone.”

“Military service is hard and complicated for every soldier, and even more so for Lone Soldiers. Their decision to come to Israel and enlist in the IDF is a brave and noble act, one that is rooted in a deep sense of mission, determination, and love of the country. This is true Zionism,” said Maj. Gen. (Res.) Meir Klifi-Amir, FIDF National Director and CEO. “FIDF supporters will continue to stand by their side and support all Lone Soldiers with a range of services during and after their military service, out of gratitude and profound appreciation for their contribution, and to ensure that not one of them ever feels alone.”

“This day is aimed at showing our appreciation to the thousands of dedicated Lone Soldiers who serve in the IDF for whom we are constantly exploring new ways to enhance our support and programming,” said Rabbi Yehoshua Fass, Co-Founder and Executive Director of Nefesh B’Nefesh. “I would like to give a special thank you to Mindy and Randy Levine for the unequivocal, genuine support they show for these special young heroes.”