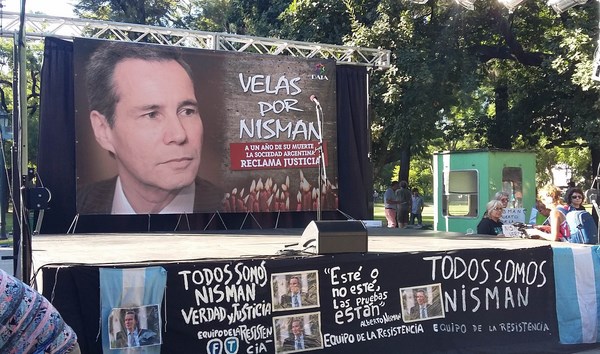 The KKL-JNF (Keren Kayemet L’Israel-Jewish National Fund) will inaugurate a monument in memory of Alberto Nisman, the Special Prosecutor murdered while investigating the 1994 car bombing of the Buenos Aires Jewish Center by Hezbollah terrorists.

On the fourth anniversary of his tragic death, Keren Kayemet L’Israel-Jewish National Fund (KKL-JNF; http://www.kkl-jnf.org/) will unveil the monument built in Alberto Nisman’s honor in a formal ceremony with officials from both Israel and Argentina.

The ceremony will take place on Friday, January 18th, 2019, at 10:00 at the Israel-Argentina Friendship Forest, Ben Shemen Forest (http://www.kkl-jnf.org/tourism-and-recreation/forests-and-parks/ben-shemen-forest.aspx).

Alberto Nisman was the leading prosecutor in charge of the investigation into the terrorist attack on the AMIA (Asociación Mutual Israelita Argentina) Jewish community center in Buenos Aires in 1994 which claimed the lives of 85 people,  and he accused the Argentinian authorities of having covered up Iran’s involvement in it.

In 2015, just hours before he was due to testify before the Argentinian Congress, he was found dead at his home. Although the mystery of his death has never been solved, the presumption is that he was shot in the head in the course of a murderous assault that was disguised to look like suicide.

“He felt a personal, not just a professional responsibility to defend the Jewish People,” said Judge Sandra Arroyo Salgado, Nisman’s former partner. “He gave his life in the quest for justice for the victims of terrorism.”

A plaque inscribed with the names of the eighty-five people murdered in the Jewish community center attack forms part of the memorial center established by KKL-JNF in the park that symbolizes the friendship between Israel and Argentina; an additional plaque bears the names of the twenty-nine victims of the attack on the Israeli embassy in Argentina, which took place two years earlier, in 1992.

“Justice, justice shalt thou pursue,” said KKL-JNF Vice Chairman Hernan Felman, quoting from the Book of Deuteronomy. “This should be the obligation of us all, and we shall not continue to be the Jewish People if we do not fulfill it. We all deserve a just world, and we must all pay for our actions, be we Jews or Gentiles. We stand together to remember what took place, and to demand justice.”

The monument in memory of Alberto Nisman (http://www.kkl-jnf.org/about-kkl-jnf/green-israel-news/february-2017/alberto-nisman-memorial-ben-shemen-forest/) was built by KKL-JNF and KKL Argentina in the Israel-Argentina Friendship Forest, next to the memorial built in honor of those killed in the terror attacks in the AMIA building in Buenos Aires and in the Israeli Embassy in Argentina.

Simultaneous translation of the event will be provided in Spanish and Hebrew.