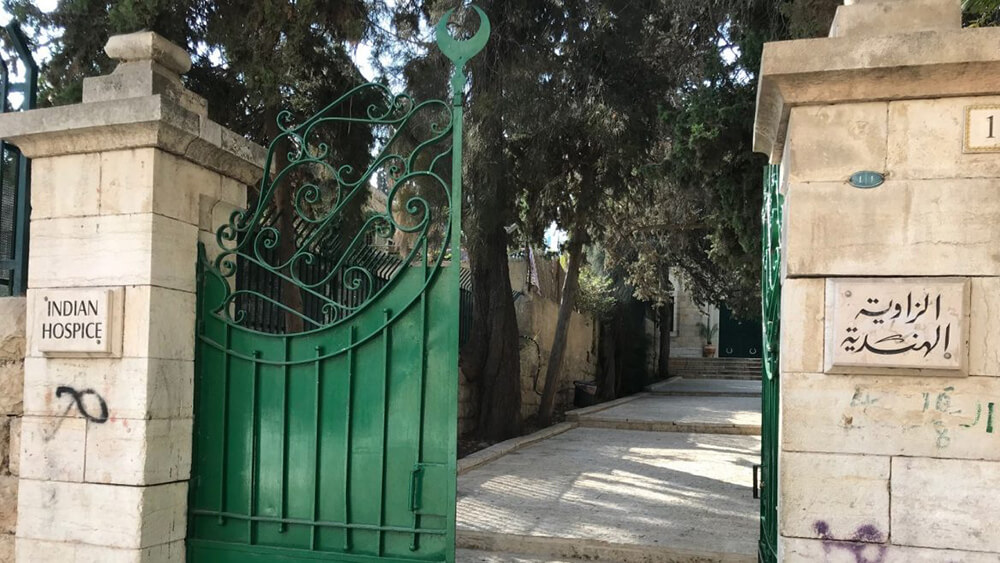 I’ve visited the Old City of Jerusalem countless times over the years, but in that time I never heard of the Indian Hospice and never passed through Herod’s Gate, an Old City entrance to the Muslim Quarter, where the hospice is located. In fact, the policeman I consulted for directions on my way had never heard of it either.

But this serene cobblestoned oasis in the jam-packed Muslim Quarter is the only home 59-year-old Nazeer Hussain Ansari has ever known.

For close to a century, the Ansari family has been the resident caretakers of the Indian Hospice, located just inside Herod’s Gate, or in Hebrew, Sha’ar Haprachim – Flowers Gate.

“My grandfather came from India back in 1924 and he was assigned as director and trustee of the Indian Hospice,” Ansari told foreign journalists getting a rare tour of the property, which is owned by the Central Wakf Council of India and open only to people of Indian citizenship or heritage.

“We offer them food and a place to stay, like their home away from home,” says Ansari, who is a citizen of India with permanent resident status in Jerusalem.

Legend has it that around the year 1200, Sufi saint Baba Farid from India came to the Holy City of Jerusalem and meditated in a stone lodge for 40 days. Ever since, Indian Muslim pilgrims on their way to or from Mecca were attracted to the site and eventually it became the Indian Hospice.

“We’re not a commercial hotel,” says Ansari, who has four children all born locally. “It’s for Indians looking for a quiet, humble place near the holy sites. They’re not looking for a TV, swimming pool or spa.”

Guests to the hospice – yes, even diplomats and government officials — do their own cooking and laundry using supplies and equipment provided by the hostel. Ansari and his parents, wife and siblings handle everything else, from administrative duties to maintaining the six guest rooms and the small mosque, library, dining hall and kitchen.

The guest room over the spot where Baba Farid lodged is still an attraction. The mystical Sufi sect of Islam – known for dance, music, storytelling, art and meditation — started in the eighth century in what is now the Israeli city of Ramla. Jerusalem was a hub of Sufism for many years, Ansari says.

The Indian Hospice has seen changes and additions over time. It was bombed four times in various wars, and sustained severe damage during the 1967 Six-Day War. Three of Ansari’s close relatives perished when the property took a direct hit.

“From 1967 to 1991 this place was frozen,” he says. “When diplomatic relations were established between Israel and India, we reconnected with the Foreign Ministry in India and started rebuilding and renovating.”

Thanks to cordial relations between India and Israel, the Palestinian Authority and Jordan, Indian officials visiting the region have stayed here for the past 15 years.

Although Prime Minister Narendra Modi did not sleep at the Indian Hospice during his visit in July 2017, he mentioned the site in his speech to the local Indian community and invited members of the Ansari family to meet him.

India is home to about 172 million Muslims, some 10 percent of the world’s Muslim population. However, most visitors these days are Hindu, Sikh or Christian, says Ansari, who speaks Arabic, English, a little Hebrew and a smattering of Hindi.

Another guest, American-Indian poet Meena Alexander, penned seven poems here, including one that begins, “Yesterday, it rained so hard/Lemons spilt from the lemon tree/And rolled over cobble stones in my Jerusalem courtyard./I thought of Baba Farid/Who came on a pilgrimage centuries ago./In a hole cut from rock by the room where I sleep,/He stood for forty days and nights/Without food or drink.”

As Israel and India grow ever closer – and travel time shrinks due to direct Air India flights introduced last March – an increase in Indian tourism is expected. In general, the Indian Hospice is not open for tours but Ansari allows individual visitors if no guests are staying there. (The address for inquiries is P.O. Box 55356, Jerusalem, Israel 91553.)

In early October, the Embassy of India in Israel launched a year of events marking the 150th birth anniversary of Mahatma Gandhi.