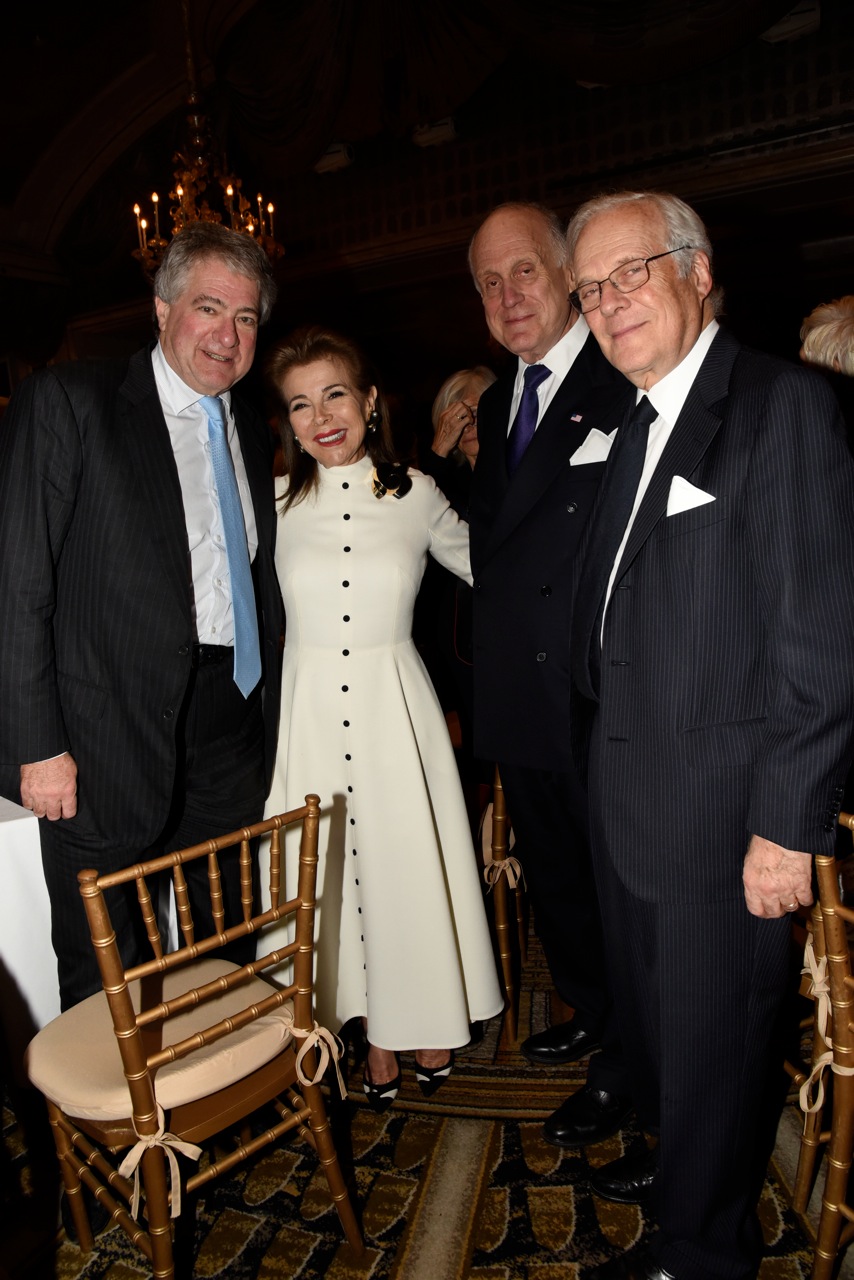 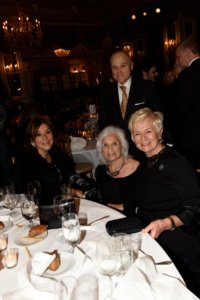 Gathering the likes of mega-moguls, Leon Black, John Paulson, Joseph Chetrit, Inga Rennert, Tom Tisch, James Wolfensohn, Ronald Lauder, the Safras, along with Princess Firyal of Jordan, Nicky Hilton, Marion Wiesel, Nancy Kissinger, Ray and Veronica Kelly, Ambassadors Ron Dermer, Danny Danon and Dani Dayan as well as hundreds of others to The Pierre on one of the busiest Wednesday night’s of the year is a near impossible feat: except when you are head of World Jewish Congress (WJC) Ronald Lauder presenting an award to honorees Robert Kraft and The Rothschilds. 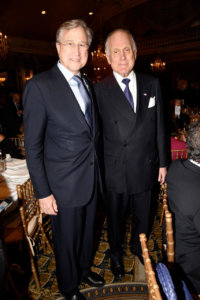 I have never seen the Rothschilds and assumed up until now they were some mythological family that existed in history books. But on this night there was a table filled with them and they are as delightful and elegant as I always imagined.

The WJC held its annual awards dinner with cocktails beginning at 6 PM as throngs of people filled the Pierre foyer.  For someone who has attended hundreds of galas this night was a rarity; the illustriousness of the crowd replete with those who flew in from Europe and Brazil was nearly unparalleled even in the rarified society circuit.  The timeliness of this evening, following the Pittsburgh shootings, was cathartic as a united group of Jews were able to gather and speak out about the scourge of anti-Semitism.  There was a definite cloud hanging over the ebullient crowd coupled with a feeling of hopefulness as one sensed this influential group would throw their full weight into fighting worldwide hatred. 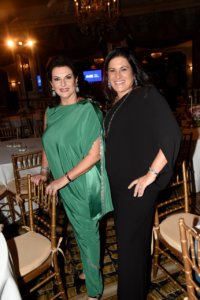 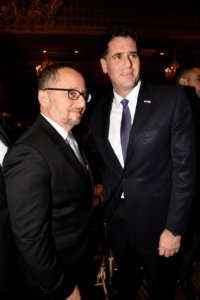 The WJC was founded 80 years ago with Ronald Lauder as its head for the past 25 years.  Lauder travels around the world meeting with presidents, prime ministers and popes to advocate for Israel and the Jewish population.  I was seated with some of the students from his “J Academy” who flew in from Berlin to attend the dinner.  They recounted how Lauder started this school to train Jewish twenty somethings on how to be Jewish leaders and advocate for Jewish rights.  Ronald Lauder began the evening by noting the constant unrelenting attacks against the people of Israel including the rise of the BDS movement and the recent march of neo-Nazis.

Lauder inquired as to why this night was different from all others with his obvious answer being the word Pittsburgh.  He remarked on the incredible prosperity of the Jews who have excelled beyond their wildest dreams while still retaining an incredible humanity as evidenced by the doctor, Jeff Cohen, who treated the shooter in Pittsburgh with the utmost care. He said if someone had told him he would be fighting for Jews all over the world thirty years ago he would ask what they were smoking.  Lauder was emboldened by the ability of the Jewish people to defy time and logic when they watch out for each other. 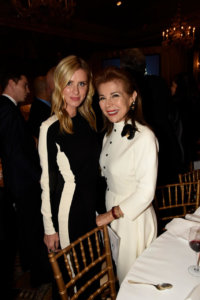 We were then introduced to Lord Jacob Rothschild who spoke of his family being in the Frankfurt ghetto eight generations ago.  Rothschild said he was honored to receive the Theodor Herzl Award since his name was sacred because he accomplished the impossible by founding the state of Israel after 2,000 years.  Lord Rothschild said it was time to remember the principles of the Balfour Declaration-a paper his family was instrumental in getting.  Lauder joked that Jacob was actually a boyhood friend of Herzl’s.

Another titled Rothschild, David, reiterated his family’s commitment to Israel and said he was honored to become well acquainted with the low key Ronald Lauder whom he called humble with an incredible sense of energy and drive enrapturing all those who come in contact with him.  Another leader captivated by Ron Lauder was Israeli Ambassador Ron Dermer who joked to groans “two Rons don’t make a right.” 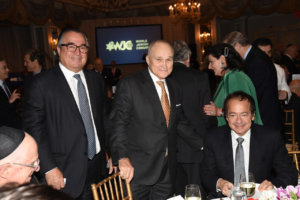 Dermer praised Lauder for being both a man of the world and “a man of his people” dedicating his life to “his people.”  He said Lauder had done the most to rebuild the lives of Jews in Europe and praised him for calling out anti-Semite Jeremy Corbyn.  Dermer extolled the Rothschild family for their similar commitment to Israel in the past as they built the Knesset and Israeli Supreme Court and for continuing this legacy by currently building a National Library in Israel.  Dermer went on to declare that he hasn’t had the opportunity to address the deadly attacks in Pittsburgh until now and condemned the politicization of the attack noting that there were anti-Semitic killings in Seattle and Kansas City in 2006 and 2014 way before Trump arrived. 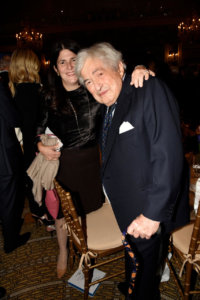 In fact Dermer said that while 684 hate crimes against Jews were reported in 2016 this was actually less then in 2008 which had 1,000 attacks and 2000 which had over 1,100 incidents.  Dermer said that while President Trump did not respond correctly following Charlottesville after Pittsburgh he gave the strongest condemnation by a leader with his remarks that we will destroy those who seek the destruction of the Jews. 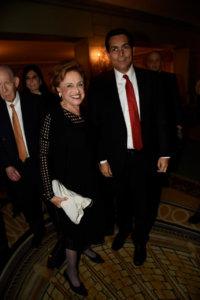 About a half a century after the Holocaust there were few attacks on Jews but now Dermer said that period was over as masked anti-Semitism has been on the rise under the guise of those who are anti-Israel.  One third of the Jewish population was massacred in the Holocaust which is the equivalent of 100 million Americans or having a 9/11 occur every day for a century said Dermer; commenting that while Israel was not the cause or cure for anti-Semitism it gave Jews the ability to fight back.

Dermer also spoke about Teddy Kollek Award recipient, Robert Kraft, whom he said he met while playing football in Israel joking that “the best way to be a great Jewish athlete is to play with Jews.”  He called Kraft a mega-mensch who conducted his life adhering to Jewish values.  He praised Kraft for having a moment of silence at a 2015 Patriots game for Ezra Schwartz who was killed by a Palestinian and said Kraft not only deserves an award for doing great things but for doing it in a way that makes all of “our people” proud.  Previous recipients of the Theodor Herzl Award include former Secretary of State General Colin L. Powell, former US Vice President Joseph R. Biden, Israeli President Shimon Peres, Elie and Marion Wiesel, former secretaries of state Henry A. Kissinger and George P. Shultz, and, posthumously, Ronald Reagan and Axel Springer. Kirk Douglas was honored with the inaugural Award. 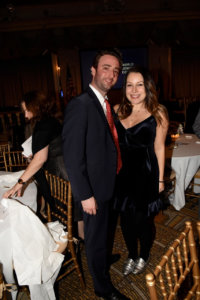 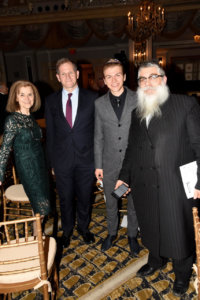 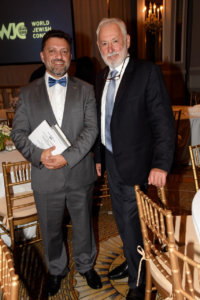 Kraft received his award and praised Teddy Kollek whom he knew for making Jerusalem the beautiful city it is today.  Kraft said he grew up in an orthodox home where Jewish identity and love for Israel were his two guiding forces.  He said his father Harry was the person he admired most and he remembers him saying that a “Shem Tov” was more important than any material wealth acquired.  His father told him to make sure when you go to bed at night people are richer for having known you.

In line with paying it forward, Kraft recounted how he buys coffee and pastries for “Dunkin Donuts” patrons being that he is not a fancy Starbucks guy.  He quoted his father saying “Ain Ra Bli Tov” ( there is no bad without good) and said that was a principle he lived by.  As Kraft studied the victims in Pittsburgh the two that stood out were the mentally challenged brothers David and Cecil Rosenthal because the congregants said they were enriched by having known them-reminding him of his father’s words. 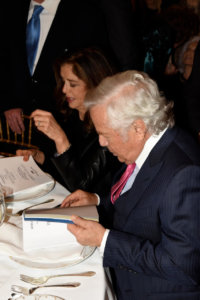 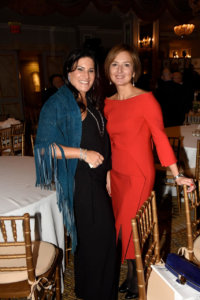 Kraft said he and Roman Abramovich were donating one million dollars and holding a soccer game this summer with 100 percent of proceeds going to fight anti-Semitism.  He thanked Ron Lauder joking that his wife Jo Carole was the brains in the family as Kraft vowed to increase his acts of kindness.  The attendees gave him a rousing standing ovation and left the venue at 10:30 PM with a lot more knowledge then they had at 6 PM-something we have Robert Kraft’s father to thank for.

By: Lieba Nesis Article and all Photography