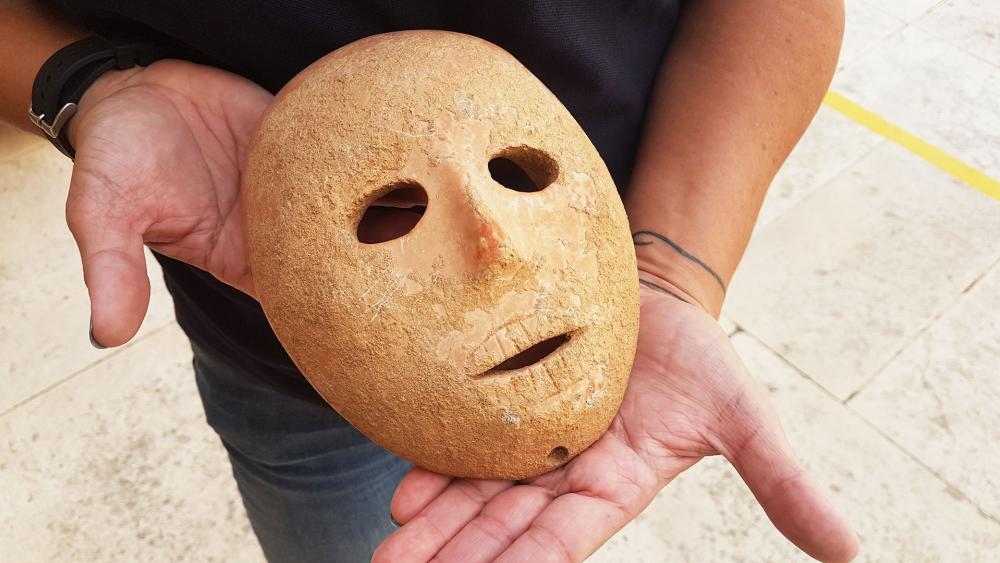 This fascinating and rare stone mask dates to the Neolithic (new stone age) period. It was discovered several months ago and is currently being studied by experts of the Israel Antiquities Authority and the Geological Survey of Israel. Results of the initial study of the mask will be presented today (Thursday) at the Israel Prehistoric Society annual meeting.

Information received at the IAA’s Antiquities Theft Prevention Unit at the beginning of 2018 led to the recovery of the impressive stone mask. The Head Staff Officer of Archaeology Department of the Civil Administration in Judea and Samaria Mr Hananya Hizmi was informed on the finding of the mask. An investigation revealed the probable archaeological site in which the mask was originally found, in the Pnei Hever region of southern Har Hevron. Its characteristics, in addition to other findings from the contexts in which it was discovered, testify that the mask is 9,000 years old – dated to the Pre-Pottery Neolithic B period.

According to Ronit Lupu of the IAA Antiquities Theft Prevention Unit, “The mask is a unique finding in the archaeological world. It is even more unusual that we know which site it came from. The fact that we have information regarding the specific place in which it was discovered makes this mask more important than most other masks from this period that we currently know of.” The mask is made of pinkish-yellow limestone, carefully shaped with stone tools to resemble a human face. Four holes were drilled along the perimeter of the mask, probably in order to tie it – possibly to the face of a living person, or maybe to a pole or other designated artifact in order to display it. According to Lupu, “Discovering a mask made of stone, at such a high level of finish, is very exciting. The stone has been completely smoothed over and the features are perfect and symmetrical, even delineating cheek bones. It has an impressive nose and a mouth with distinct teeth.”

Dr. Omry Barzilai, head of the IAA Archaeological Research Department, said that, “Stone masks are linked to the agricultural revolution. The transition from an economy based on hunting and   gathering to ancient agriculture and domestication of plants and animals was accompanied by a change in social structure and a sharp increase in ritual-religious activities. Ritual findings from that period include human shaped figurines, plastered skulls, and stone masks.”

Ancestor worship was practiced during this period. “It was part of the ritual and retention of family heritage that was accepted at the time,” says Ronit Lupu. “For example, we find skulls buried under the floors of domestic houses, as well as various methods of shaping and caring for the skulls of the dead. This led to plastering skulls, shaping facial features, and even inserting shells for eyes. Stone masks, such as the one from Pnei Hever, are similar in size to the human face, which is why scholars tend to connect them with such worship.”

There are currently fifteen known masks in the world that date from this period, of which only two were discovered in a clear archaeological context – meaning: we know which site they came from. The remaining masks are in private collections throughout the world, which makes it more difficult to study them. The importance of this new mask stems from the fact that it has been traced to an archaeological site that can be studied. The site can help us understand the material culture, everyday world in which the mask was produced, probably for purposes of worship.

The mask from Pnei Hever joins other masks attributed to the Pre-Pottery Neolithic B period discovered in the southern Hebron Hills – Judean Desert area. Discovering the mask from Pnei Hever strengthens the assumption that the southern Hebron Hills area was a center for producing stone masks, and most likely also for ritual activities in the Pre-Pottery Neolithic B period.

Dr. Omry Barzilai and Ronit Lupu of the IAA will present the initial research of the mask today (Thursday) at the Israel Prehistoric Society annual meeting to be held at the Israel Museum.