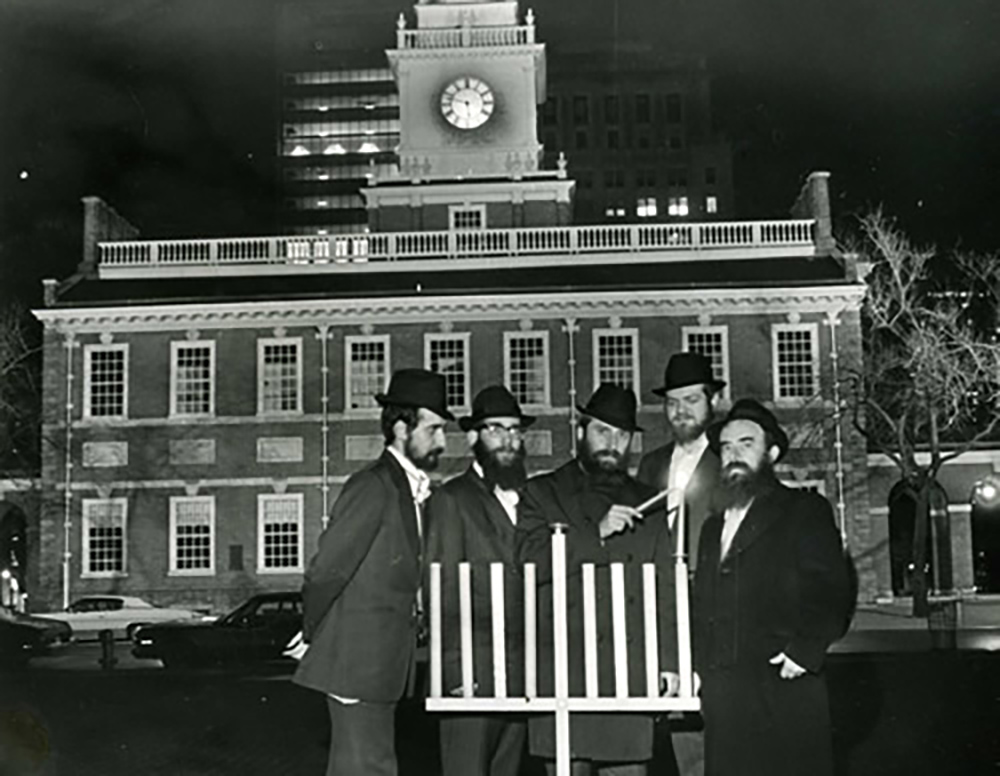 Through the years and the courts, a small spark in Philadelphia now lights up the world

It was a frigid Saturday night during Chanukah of 1974, when Rabbi Abraham Shemtov had the unusual, perhaps wild, idea of lighting a menorah right in front of Independence Hall, which houses the Liberty Bell, the icon of American freedom.

The menorah was crude and made of wood; he had fashioned it with the help of some visiting yeshivah students. Almost no one was on Independence Mall in Philadelphia that night to witness the actual lighting, but that simple 4-foot menorah was the seed from which thousands of public menorahs have sprouted up on public and private places throughout the United States and around the world.

Fast-forward 44 years, and these menorahs—many of which are set up and celebrated by Chabad-Lubavitch centers as part of Chanukah festivities—have become a staple of Jewish cultural and religious life. Jews from Moscow to Minnesota, from Monaco to Martinique, gather every year to celebrate the holiday with the lighting of an oversized menorah, usually 9-feet tall or more, and often towering above the celebrants.

The following year, Shemtov—regional director of Chabad-Lubavitch in Philadelphia and chairman of Agudas Chassidei Chabad, the umbrella organization of the Chabad-Lubavitch movement—returned with a more substantial menorah to light, as well as the permits necessary to do so.

Although he may not have known it at the time, exactly due west on the opposite U.S. coast, Chabad Rabbi Chaim Drizin in San Francisco had made arrangements to light an oversized wooden menorah in the city’s Union Square. Bill Graham—a child survivor of the Holocaust and a well-known music promoter—donated the construction of the 22–foot-tall mahogany menorah, and the tradition grew into its current form.

Over the next few years, menorahs began springing up in cities and towns all across America.

The next major development was in 1979, when Shemtov collaborated with Stuart Eizenstat—President Jimmy Carter’s chief domestic-policy adviser and executive director of the White House domestic-policy staff—to arrange for a jumbo menorah to be built on the White House Lawn. Despite the fact that Carter was awash in the opening weeks of the Iranian hostage crisis, he pointedly walked from the White House to the menorah, where he lit the shamash—the helper candle from which the others are kindled—and shared greetings with the assembled crowd.

Perhaps reflecting his state of mind, the president voiced his dismay with the fact that only four candles were then lit—one flame is added every night for the duration of the eight-day holiday—as it signified a world still very much shrouded in darkness.

The 1980s: Growth and Challenge

Even as Jews everywhere flocked to public menorah-lightings in their cities and took pride in knowing that Chanukah was being celebrated in the public arena, the idea met with significant resistance—particularly from certain sectors of the “Jewish establishment” and from the ACLU, which claimed that it was a violation of the separation of church and state as mandated by the First Amendment.

Ironically, it was the same First Amendment that attorney Nathan Lewin would evoke time and time again as he successfully litigated dozens of cases in a decades-long effort to secure the right for Jewish people to place a menorah and observe Chanukah on public property.

In 1980, Rabbi Yisroel Brod, then director of Chabad Lubavitch of Bergen County, N.J., arranged for a large menorah to be set in front of the Bergen County Court House in Hackensack, N.J.

“It was beautiful,” recalls Brod. “It was an ideal location. Every night we would get hoisted up by a cherry picker to light the menorah. We had people from the Federation there, and everyone had a wonderful time.”

In advance of Chanukah 1981, Brod decided to erect a second menorah in his hometown of Teaneck, N.J., with its much larger Jewish population. “I was so naïve then; I had no idea that people would have an issue with it,” he relates. “So I was shocked when I got a calls asking that we not go ahead with it.”

In response to a letter from the Jewish Community Council of Teaneck, which opposed the menorah, the Rebbe—Rabbi Menachem M. Schneerson, of righteous memory—penned two letters in which he outlined his position on the matter.

“ . . . Experience has shown,” the Rebbe wrote in his second letter, “that the Chanukah menorah displayed publicly during the eight days of Chanukah has been an inspiration to many, many Jews, and evoked in them a spirit of identity with their Jewish people and the Jewish way of life. To many others, it has brought a sense of pride in their Yiddishkeit and the realization that there is no reason really in this free country to hide one’s Jewishness, as if it were contrary or inimical to American life and culture. On the contrary, it is fully in keeping with the American national slogan ‘e pluribus unum’ and the fact that American culture has been enriched by the thriving ethnic cultures which contributed very much, each in its own way, to American life both materially and spiritually … ”

Concerning the legality of placing a religious symbol on public grounds, the Rebbe cited precedence from the menorahs in major cities, as well as the menorah on the White House lawn. “That it was also constitutional, legal and proper goes without saying since the President of the U.S. personally participated in it,” he wrote.

Ultimately, Brod’s bid for a menorah that year was rejected by the Teaneck Township Council, and he decided not to pursue the matter.

He did arrange for a menorah to be lit for the first time in the New Jersey state capitol of Trenton. That tradition, which began in 1982, continues to this day.

By 1983, Brod’s empire of menorahs expanded to 15 stately structures standing proudly in front of town halls all across Bergen County (three municipalities—Fort Lee, Oakland and Hillside— put up their own).

The Rebbe’s letters proved to be invaluable for many emissaries facing similar issues.

Chanukah begins this year on the night of Sunday, Dec. 2, and continues through Monday, Dec. 10. For information, insights and events at Chabad centers around the world, visit: Chabad.org Chanukah.