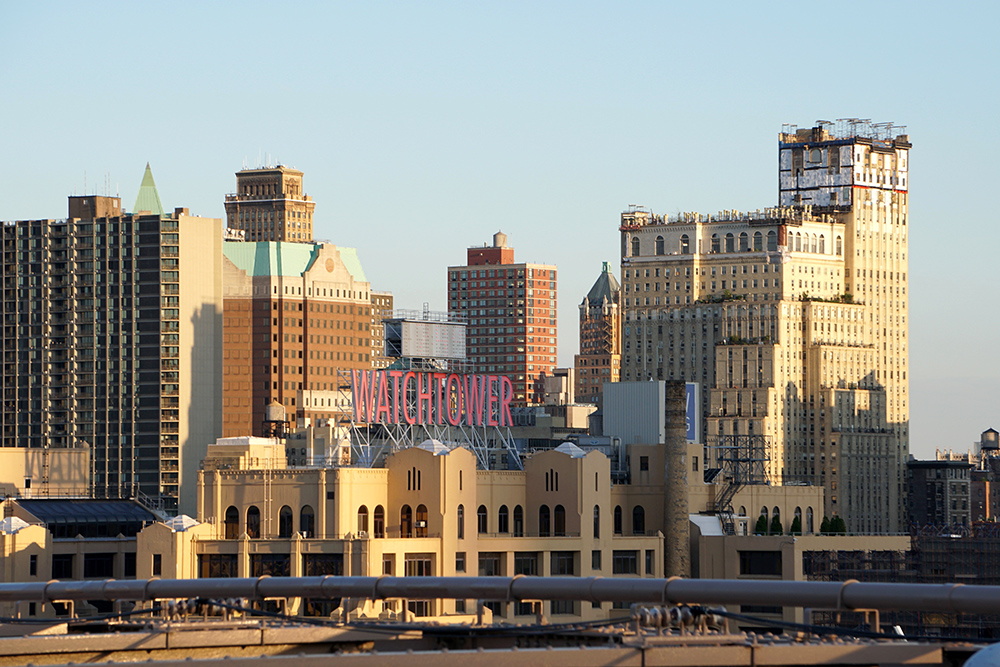 The landmark Watchtower sign on the Brooklyn waterfront is being replaced. Photo Credit: Shutterstock

The landmark Watchtower sign on the Brooklyn waterfront is being replaced.

The city’s appeals board has given its okay for a new sign. Previously, the Department of Buildings had informed the building’s new owners of the former Jehovah’s Witness office buildings, now called Panorama, that the sign had to come down.

The Watchtower sign, which had been visible to commuters on the Brooklyn Bridge for 49 years, was removed by the Jehovah’s Witnesses in December 2017, the New York Post reported. A time and temperature sign remains in place.

Workers had removed it from the rooftop in December, and board members cast their votes without expressing their reasons for deciding to allow the iconic sign at 30 Columbia Heights to be replaced.

In July 2009, Jehovah’s Witnesses purchased a plot of land in upstate New York with plans to relocate their world headquarters, the group said. The 253 acre property is located about 50 miles northwest of the existing facilities in Brooklyn, New York, where they have been since 1909.

“Some 800 Witnesses live and work at the facility, which will include an office building, a services building, and four residence buildings. A modest museum documenting the modern-day history of Jehovah’s Witnesses is also planned.”

According to 6sqft.com, the religious group sold the site at 25-30 Columbia Heights to the Columbia Heights Associates in 2016 and soon after the letters were removed, leaving its framework intact.

The Columbia Heights Associates, “which is made up of developers CIM Group and LIVWRK Holdings (Jared Kushner and Kushner Cos. sold their stake in June), paid $340 million for the property,” the web site noted. The developers plan to convert the five 19th-century office buildings and warehouses into a 750,000-square-foot mixed-use campus called “Panorama.”

“The DOB had denied the developers request to replace the sign, claiming the sign was actually erected illegally,” it added. “The department said that the “Squibb sign” put up by the E.R. Squibb pharmaceutical company, who owned the building first, and later the Watchtower sign by the Jehovah Witnesses were both illegally installed.

Jehovah’s Witnesses have an active presence in most countries, but do not form a large part of the population of any country. Last year, Jehovah’s Witnesses reported more than 8.45 million publishers — that is the term they use for members actively involved in preaching — in 120,053 congregations. For the same year, they reported over 2 billion hours spent in preaching activity, and conducted Bible studies with more than 10.1 million individuals.

The 2008 US Pew Forum on Religion & Public Life survey found a low retention rate among members of the denomination: about 37% of people raised in the group continued to identify themselves as Jehovah’s Witnesses. The study also found that 65% of adult Jehovah’s Witnesses in the US are converts.