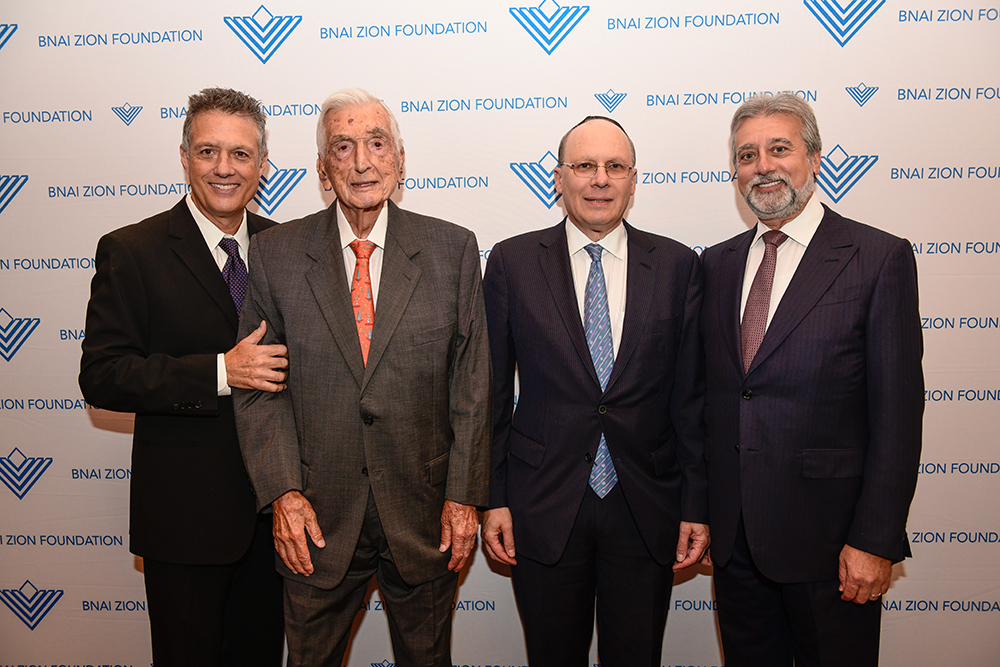 Bnai Zion, one of the most prominent organizations when it comes to building a safe and unified Israel, held their annual gala on November 4th in New York City at the Museum of Jewish Heritage in Battery Park. While the organization always brings together a high profile crowd of politicians and philanthropists as well as an impressive list of honorees, this year’s event held even more meaning as the organization was celebrating 110 years of service as well as 70 years of the State of Israel. 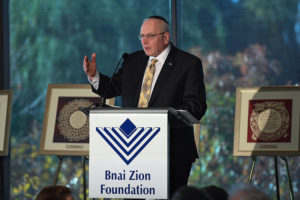 From building hospitals to funding cultural projects, Bnai Zion has raised millions of dollars and completed over a hundred projects for over a century. Today, Bnai Zion is the only organization pursuing capital projects for social impact causes that unite supporters of Israel across the political and religious spectrum. Working with partners on the ground, those who care about the people of Israel are able to help build a safer, more unified society. The organization’s focus on investments in capital projects ensures long-term impact – from a center for disabled veterans to a village for holocaust survivors, the lasting effects of Bnai Zion’s work can be seen across the country.

Guests at the event came out to support all the work which has been done as well as to raise funds and honor those who have embodied the ideals of the organization. The gala, which started with a reception at noon, gave attendees a chance to mingle before settling into their seats for the upcoming speeches while enjoying a buffet lunch.

Internationally recognized mentalist Oz Perlman, who was born in Israel and gained attention on the reality show America’s Got Talent, gave a spellbinding performance by including guests in his show which amazed everyone of all ages. Let’s just say he was able to guess everything from someone’s favorite food to who they would most like to have dinner with, accompanied by showmanship and laughter along the way in true Oz style. 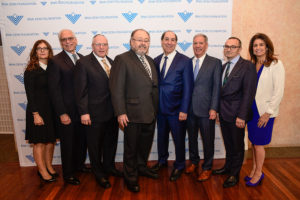 Harry Adjmi served as the master of ceremonies and introduced each speaker and honoree. Those who received recognition for their efforts and values included Rabbi Elie Abadie, M.D., Kenneth Abramowitz, Mark F. Langfan and Kenneth A. Langfan.

Ambassador Dani Dayan, Consul General of Israel, who had just returned that morning from Pittsburgh as he represents Israel in Pennsylvania, said “I have never shared so many common values and beliefs than with the honorees at this particular event. The honorees are committed lovers of not only Israel but also of Eretz Israel which has been one of my personal causes for many, many years. In a few weeks we will mark Holocaust Remembrance Day and we always say never again. I believe that never is now. It’s happening now.”

National President of Bnai Zion, Mr. Stephen Savitsky, who spends time supporting projects in Israel for thousands of those in need, thanked the honorees for their hard work and contributions.

“We live in a very polarized world where it’s hard for people who have different opinions to get together as one,” said Savintsky. “I always thought, in the Jewish world, we all come together. And while it was true in Pittsburgh, I also saw for the first time in my life, that it almost pulled us apart and we often read about the great divide between American Jews and those in Israel. When I think of Bnai Zion, I think of our mission, which is really just like the words of Emma Lazarus, give us your tired and your poor, and that’s what we stand for. Regardless of politics, social interactions or religious beliefs, we come together to work for the people and the state of Israel”.

Rabbi Elie Abadie, M.D., the founder and rabbi of the Manhattan East Synagogue, Congregation Shaare Mizrah, as well as the founder of the Sephardic Academy of Manhattan who also maintains a medical practice were he specializes in gastroenterology, thanked the audience after receiving his award for his years of service and dedication to the land and people of Israel. 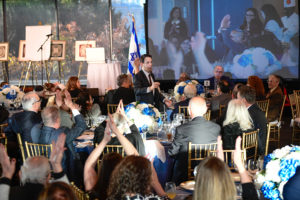 Rabbi Abadie was formerly the Founding Rabbi and Spiritual Leader of the Edmond J. Safra Synagogue in New York City, and the Rabbinic Advisor of the Moise Safra Community Center in Manhattan. He was the Director of the Jacob E. Safra Institute of Sephardic Studies at Yeshiva University, where he taught Sephardic Judaism, history, philosophy, and comparative traditional law. He currently serves on the Board of Governors of the Diaspora Museum, Beit Hatfutsot, and is a Board Member of the American Sephardi Federation, and the Chairman of the World Sephardic Zionist Organization. He is the Treasurer/Vice-President of the New York Board of Rabbis and a member of the Governing Council of the WZO. In addition, he serves as the President of Justice for Jews from Arab Countries.

Kenneth Abramowitz, Managing General Partner and co-founder of NGN Capital, a worldwide healthcare venture capital fund, is also a devoted philanthropist who was recognized for his staunch support and generosity.

Abramowitz, who had just come back from visiting Israel, said he was “honored to be at this event. I’ve been involved with Israel which was one of my goals and one of the goals of my father. I go about every two months. Every one trip is for business and the other five times are for what I call intellectual sightseeing. In other words I’m sightseeing in order to learn. Usual organizations in Israel are one dimensional, but Bnai Zion does multiple things so that gives me extra respect for the organization.” 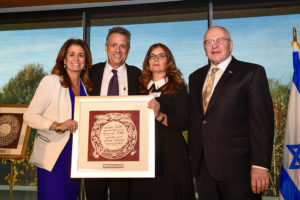 Kenneth is a staunch supporter of Israel and is an active member of a number of pro-Israel organizations. He serves on the boards of the Israel Independence Fund, American Friends of Likud, Americans for a Safe Israel, The Institute for the Study of Global Antisemitism and Policy (ISGAP), EMET, and the Bible Lands Museum. Mr. Abramowitz, who also founded the website savethwest.com, delivers over a hundred speeches a year.

Father and son honorees William K. Langfan and Mark Langfan were also recognized for their tremendous efforts and contributions to the safety of the people of Israel and beyond. Mark Langfan, an attorney and writer and the son of William Langfan, developed a three dimensional topographic model of Israel which explains the strategic implications of the height and depth of the mountains of Judea, Samaria and the Golan Heights, thus saving countless lives. He travels internationally to lecture on his life saving map and is currently Chairman of Americans for a Safe Israel.

“I care about Israel’s security as well as America’s security,” said Langfan. “I was struck with how people would debate the peace process all the time in Israel and was trying to determine what the process was and what people were fighting for. The more I learned the more I realized that many people didn’t understand what the situation was in Israel. With the help of my dad I had the map made of Israel where you could actually see the mountains of Judea and Samaria. My map was used in extensive dialogue and deliberations in the Pentagon so I felt my map really made a difference in regards to both American and Israeli troops. We need a non-political organization which is strengthening Israel and Bnai Zion funds projects which span ethnicities and political positions and we all need to work together to make sure everyone is included and valued and appreciated so that we can build the brightest future for Israel and for the Free World.” 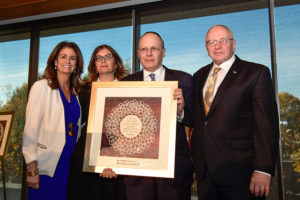 Mark’s father, William Langfan, a WWII veteran and philanthropist, was proud to receive his award but also told the audience that he was appalled the way in which Jews in Pittsburgh were trying to shun and ban President Trump from coming to their city, to which he received cheers and a standing ovation.

Born in 1922 and raised in New York, William served in the US Army in anti-aircraft unit from 1943 to 1945. During the war, he fought in the Battle of Britain, where he shot against V1 German rockets, and landed in Normandy. From there, he fought across France, Belgium (including in the Battle of The Bulge), and Germany, and was mere miles from the German-Czech border when the war ended. Because he was fluent in French, William also served as his unit’s interpreter. This warrior received the French Legion of Honor Medal for his service in France. In 1960, William started the William K. Langfan Company, a successful real estate firm now managed by his children. His three children and six grandchildren all share his love of Israel and Judaism. William has created permanent endowments at six educational institutions: He regularly contributes to Israeli universities and other Israeli organizations, and has donated two ambulances to Magen David Adom.

Bnai Zion which raised life saving funds at the event, will continue the work they do to help those from all walks of life. The Bnai Zion Medical Center, located in Haifa in the north of Israel, is a beacon of hope in the region and provides excellent care to every patient, regardless of gender, race, religion, sexual orientation, or national origin and provide thousands of life-saving surgeries and rehabilitation programs; however, the center is in a vulnerable area as it is susceptible to attacks from Lebanon. Yet, the Medical Center is within range of rocket attacks from Lebanon.

Since the emergency room at the hospital is particularly vulnerable, Bnai Zion is raising funds to build a new protected underground unit that will be fortified against nuclear, biological, and chemical attacks to ensure that all who need medical care can receive treatment in a secure facility. Thousands of people continuously visit Bnai Zion’s emergency department, where all patients, including citizens injured in terror attacks, receive exceptional medical care and continue to receive cutting-edge treatments. The Medical Center was the frontline hospital during the Second Lebanon War of 2006. In wartime and in peace, Bnai Zion Medical Center plays a crucial role in treating and rehabilitating those in need of medical care. Without a unit that is protected against potential nuclear, biological, and chemical attacks, the most vulnerable people in Haifa and the surrounding areas – those in need of medical attention – remain at risk.

In addition to the Bnai Zion Medical Center, they also support living services for the disabled, a residential community for at-risk youth, a senior center and many other essential programs dedicated to the health and well-being of the country and the people.