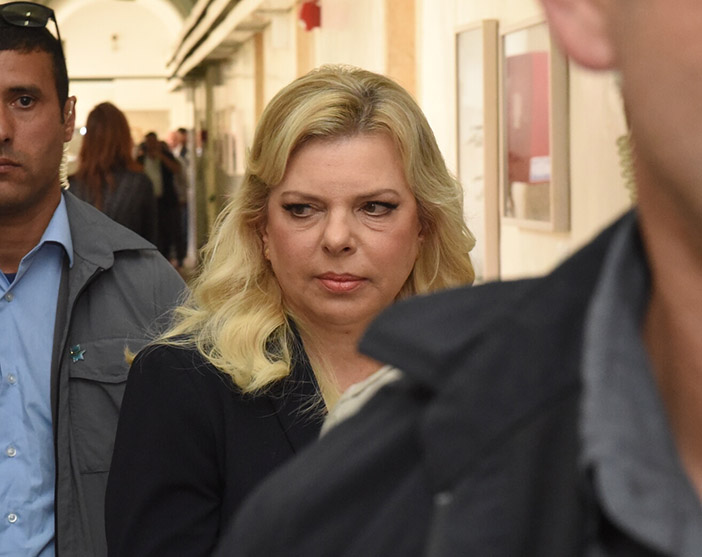 Israeli Prime Minister Benjamin Netanyahu’s wife, Sara Netanyahu, made her first court appearance on Sunday afternoon as she goes on trial for fraud at the Jerusalem Magistrate’s Court.

Sara Netanyahu, as well the deputy director-general of the Prime Minister’s Office Ezra Saidoff, have been accused of misusing $100,000 worth of state funds for restaurant meals and ordered food from September 2010 to March 2013. The indictment, which was filed in June, details the transactions for each month.

Netanyahu also allegedly told employees to conceal her actions, despite being aware of regulations forbidding the order of catering services while the Prime Minister’s residence employs a cook.

Mrs. Netanyahu had allegedly been aware of the restrictions. The indictment accuses her, in coordination with then-deputy director-general Ezra Saidoff of the prime minister’s office, of ordering employees to hide the fact that a chef was employed “so that this wouldn’t be exposed by the office’s accountants, thereby receiving double funding at the treasury’s expense to pay for restaurant meals at the residence.” The cook was therefore listed as part of the cleaning staff.

She is also accused of using waiters to serve the meals on weekends and at private affairs, listing them as “extra manpower” or “cleaners” to conceal the fact that they were illegally employed.

“The accused have made various claims they know aren’t true and which they themselves don’t believe to be true,” according to the indictment, adding that “hundreds of thousands of shekels … were extracted continuously and methodically, on the basis of inaccurate claims.”

In a statement in response to the indictment, Mrs. Netanyahu’s legal team said, “It’s the first time in Israel and in the world that the wife of a leader is put on trial for food entrees. There was no fraud, no breach of trust or any other felony. We’re certain in the end that justice will speak. Truth and logic will prevail.”

During proceedings, a decision was made by the court president to give both the prosecution and the defense until November 13 to reach a deal outside of court – which has failed up until now as Netanyahu has denied the allegations.

The court added that it will reconvene if a deal is not reached by both sides.